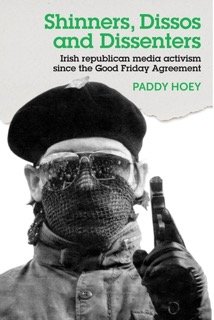 In Shinners, Dissos and Dissenters, Paddy Hoey provides an in-depth analysis of Irish republican media activism since the 1998 Good Friday Agreement. Hoey, a lecturer in media at Edge Hill University, assesses how different strands of republicanism have used newspapers, magazines, and online spaces to articulate their ideological positions. While providing a detailed historical account of republican media activism, Hoey advances important critiques of the mainstream consensus surrounding the Good Friday Agreement; the characterisation of oppositional voices as dissident extremists; and idealistic expectations about the power of digital media.

The first two critiques are closely related. As Hoey outlines it, the mainstream consensus surrounding the peace process and Good Friday Agreement left little room for debate. As the dominant or “hegemonic” force within republicanism, Sinn Féin’s move towards the mainstream marked a pivot from the republican tradition and defined the parameters of dissent. Republicans critical of the peace process and Sinn Féin were thereby characterised as dissident extremists or, in the parlance of security studies and international relations, as violent extremists. Hoey successfully undermines the latter characterisation by highlighting the activism of those who opposed the process, but not the peace. As Stephen Baker observed in his Journalism Studies article on the alternative press in Northern Ireland, “the dissident views of the alternative press have looked more prescient than mainstream media support for the peace deal” given the protracted political crises that followed the Good Friday Agreement (375).

Shinners, Dissos and Dissenters is a significant elaboration on Baker’s work. A key aim of the book is to reject the simplistic classifications that dominate in mainstream media coverage by investigating how dissidents created counter publics in opposition to the “propaganda” surrounding the Good Friday Agreement and “the changing focus of establishment republicanism” (21) represented by Sinn Féin. Undoubtedly, some readers will quibble with Hoey’s portrayal of dissidents and their ideological intentions. However, the book is very clearly set out as an effort to understand dissident media practices as forms of cultural production in the sense of Stuart Hall and John Fiske and as a means of challenging dominant beliefs in the Gramscian sense of contesting hegemony. Consequently, Hoey adopts a broad historical view that seeks to contextualise dissent and media activism within the “physical, ideological, and psychological spaces from which it emerges”(10). This contextual analysis is a key strength of the book.

Hoey’s third major critique concerns the enduring value of print media over digital media. Influenced by Evgeny Morozov’s (2011) critique of net-utopianism, Hoey repeatedly contests “superficial and depthless arguments” (2) about the mobilising power of social media. In so doing, he makes many interesting observations about how the shift to social media has reduced opportunities for civil interaction. In contrast to the righteous invective found on Twitter and the ideologically closed groups found on Facebook, Hoey suggests that long form journalism offered greater possibilities for engagement with opposing perspectives. As an example, he discusses the interesting case of an online magazine, The Blanket (2001-2008), which featured articles by republicans and loyalists opposed to the peace process.

Given the volume of recent research about polarisation and disinformation on social media, few would take issue with Hoey’s argument about the limited value of social media for political deliberation. However, and allowing that the book is specifically about Irish republican activism, he is perhaps too dismissive of the potential utility of social media in other contexts. For example, the social media activism of Black Lives Matter has awakened a new generation of US activists demanding racial equality (see Taylor) and social media is a key tool for refugees and migrants to protest their conditions in detention centres (see Guida).

In the context of Northern Ireland, Hoey acknowledges that the web has brought opportunities “for a wider, more diverse range of actors to make their interventions”, but maintains that “radical change has not and cannot be arrived at in this sphere” (142). Consequently, he argues that political blogs, such as Mick Fealty’s non-partisan Slugger O’Toole (www.sluggerotoole.com), “made little deliberative difference to the structure and discussions of republicanism” (54) because they were unconnected to dissident movements and “there were few examples of the online world setting the political agenda” (55). This is perhaps a little unfair to the broader value of websites like Slugger O’Toole, which did not just bring together different views on the peace process but also gave voice to political issues that were sidelined such as the environment, gender equality, and so on. Thus, if Hoey maintains that republican publications made “meaningful contributions to the political public sphere” (87), it is hard to see why online publications that gave voice to marginalised issues did not.

Although the book is about media activism, it also reads as a recent history of republican ideology. Chapter 1 introduces republican media activism in the context of the public sphere and counter publics. Here, Hoey outlines some of the key arguments highlighted above. Chapters 2 and 3 examine how different strands of Irish republicanism developed and fragmented since 1998. Chapter 2 is dedicated to Sinn Féin’s move towards mainstream politics while chapter three examines the grassroots organisations that gave voice to dissent against the Good Friday Agreement and Sinn Féin. In these chapters, Hoey proves to be an insightful navigator of republican ideology and its historical roots.

Chapter 4 focuses on Sinn Féin’s party newspaper An Phoblacht, which ceased its print publication in 2017. Chapter 5 examines two dissident magazines, Fourthwrite and the Blanket, which are characterised as the “mosquito press” in which “the new counter publics of Irish republicanism found a space to exist and develop” (122). Chapter 6 examines the growth of online media “(in)activism” by éirígí and the Republican Network for Unity (RNU). Here, Hoey develops an interesting analysis of how éirígí updated the historical repertoires of republican activism to tap into the anti-corporate ethos and guerrilla activist strategies of anti-globalisation movements such as Indymedia.

Chapter 7, the epilogue, carries the misleading title “Brexit, the border and nationalism’s bounceback”. In effect, the chapter outlines the electoral fortunes of Sinn Féin in Northern Ireland and in the Republic of Ireland. As such, it takes up the theme of chapter 2 in charting Sinn Féin’s movement towards the political mainstream. There is little comment on Brexit and its implications for the Irish border, but this is hardly surprising given the lack of clarity from the British government since the 2016 referendum.

Shinners, Dissos and Dissenters is a well-researched and well-written book that offers an important counterpoint to the security studies literature on republican dissidents. With its breadth of historical insight, the book is recommended for those interested in the ideology of Irish republicanism as well as radical or alternative media practices.