Short Shorts: A Masala of Musicals

Short Shorts: A Masala of Musicals 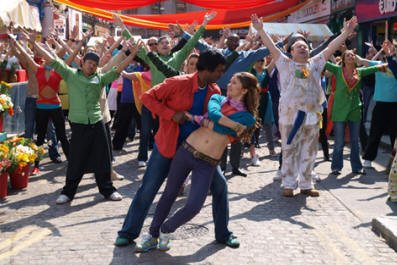 In a highly innovative move three years ago, Irish Film Board/Bord Scannán na hÉireann made a change to the application requirements of Short Shorts, one of their six short film funding incentives. While the Signatures, Virtual Cinema, Reality Bites, Frameworks and Gearrscannán (short films in Irish) programmes retained their basic prerequisites for funding, the Short Shorts category moved from challenging filmmakers to tell a story with cinematic originality, towards more generically-based preconditions. It was proposed, largely motivated by the generic qualities of the highly successful low-budget musical production Once (Carney, 2006), that the category “short musicals” was to provide the qualifying factor for producers applying for funding under the Short Shorts category.

While the move was not unprecedented – Darklight and other Irish festivals already categorised their short productions generically – the challenge to filmmakers was clearly grounded in market-based considerations. Not only was it hoped that the new designation would reinvigorate the system, bringing new energy and talent into the field, but it was also recognised that international festival programmes most often bracketed their shorts programmes in generic clusters, meaning that this kind of categorisation would inevitably facilitate the marketing and distribution of Irish talent on indigenous and overseas circuits. At festivals from Cannes to Sundance, Irish Talent on Film – the promotional DVD produced annually by the IFB – would include films that now moved beyond broader and less well-defined categories of “live action” and “animated shorts” towards more precise cinematic description, making the importation of generically designated compilations an attractive proposal for prospective festival programmers.

As a result of this inventive challenge, of the twenty-eight short films funded by the board in 2009, six short productions were categorised under the title “Musical”.  But while they each worked with the genre’s semantic and syntactic configurations, five of the six played in a meta-cinematic way with the conventions of the musical. Tellingly, this parodic dialectical address to generic convention happened on the level of form rather than on the level of narrative, so that while community interaction and the success of the respective protagonists’ romance were not entirely absent in most cases, the structural codes of the films were addressed first and foremost. Examples of this address included: playing with the incredibility of characters’ diegetic performing to the extra-diegetic soundtrack; the self-consciousness of mediated performance; and an acknowledgement of the artificiality of the films’ apparent seamless construction.

Three of the six short films use generic playing to comedic effect. Dental Breakdown andSeparations Agency (directed by Ian Power and Shane Martin respectively) reformulated otherwise straightforward apprehension dramas by replacing dialogue with song, so that commonplace anxiety – in the first case, fear of going to the dentist and, in the second, relationship breakdown – are comically rendered by virtue of the merry lyricism of the (sung) performances at odds with the plot. Mr Foley (directed by “DADDY”) creates its comedy by placing the extra-diegetic soundtrack makers – musicians, foley artists, and sound effects men – into the diegetic space, so that this crew follows the protagonist around the hospital in which he wakes at the beginning of the film. Two of the other shorts in the series similarly acknowledge the constructed nature of performance by reframing it and exposing the mediation. A Clown’s Requiem (directed by Jason Forde) appears at first to be the back stage tale of a clown’s downbeat contemplation over his last public performance, until a final 180-degree turn of the camera reveals that what we have been watching is, in fact, a theatrical presentation in front of a live audience. Similarly, Chairs (directed by Pete Moles) depicts a televised performance of the final round of a hypothetical international musical chairs competition.

The last of the six short musicals on the Film Board This is Irish Film (2010) promotional disc is very different in several respects. Unlike the five films mentioned above, Moore Street Masala (written, directed and edited by David O’Sullivan) does not parody or address meta-cinematically the conventions of the mainstream musical genre. Rather, it pays honest homage to the Bollywood form and, unlike Slumdog Millionaire (Boyle, 2008) which ends with a typical Bollywood-style musical set-piece, is wholly dedicated to replicating the structural and narrative conventions of that Eastern cinema. While it does have comic moments, these are not generated by burlesque or distorted assimilation of the Bollywood aesthetic, but by the juxtaposition and blending of local recognisable elements with those from the Indian film tradition. It is not a parody of this cinematic formula, but a celebrated affirmation of its stylistic adaptability, generic flexibility and colourful set-piece variability; something alluded to in the masala (“mix”) of the title. The established funding category under Short Shorts also allowed a mixture of talent among the crew, in this case including the musicians Cormac Breslin and Declan Quinn of Dublin rock band The Republic of Loose, who moved towards the composition of soundtracks in 2008 when they established Decor Music.

Examples of this “blending” for the provision of comical or other tonal effects abound inMoore Street Masala. The gloomier greys and browns with which we might have painted the mise en scène of Dublin’s iconic and renowned Moore Street in pre-Celtic Tiger years, are dramatically invigorated here with an assortment of colourful costumes and a luminous setting, as well as by dynamic song and dance routines. The quintessential Dublin street, with its identifiable accented Irelanders, is populated with an international cast of characters, including the Indian protagonist. Dublin urban rap-style slang lyrics are integrated into the Indian music, and the tonal qualities of the Eastern melodies also bring an oriental flavour to the local singing. As is typical of the genre, song and dialogue interact and interrupt each other, and “reality” moments are merged with dream sequences as, conversely, the former are used to snap protagonists out of reverie. The romantic yearning of the male lead is further undercut by the lyrics: as he sings “The magic began… when you bought skimmed milk…” his emotional expression is suddenly interrupted by his boss who shouts “Baba! Inside now!”. At another similar moment the extra-diegetic music becomes diegetic when, in a cut away from the convenience store floor to the office of the owner, the music to which the characters are singing and dancing is rendered as piped over the intercom. Again, angered by this, the boss interrupts the frivolity shouting “Get back to the till!”. Location jump cuts, typical of all music videos, effect another trait of the Bollywood blending as “foreign” Edenic rural landscapes are intercut with urban street scenes. The tonal blending that happens throughout is directly presented in the alliteration of the title.

True to the Bollywood narrative form, Moore Street Masala uses its musical and action set-pieces to assist the development and conclusion of the romance plot. A significant one of these occurs when the main film soundtrack is heard to slur to a halt as the film slows down and frames seem to get jammed in the projector. This conventional Bollywood-style transition provides for a jump cut to a fantasy sequence in which the shop assistant runs through fields with his estate agent love interest. This section of film is rendered by computer generated modification as a scratched, grainy and cyan-tinted 35mm format that is in complete contrast to the sharp, colour-saturated digital images of the rest of the film. In a moment of apposite commentary on contemporary Irish society, the heroic Baba (Deva Naidu) protects his heroine “Lady” (Anne Wilson) by fighting off “First Time Buyer” and “For Sale” signs that float surrealistically and threateningly towards her. This piece ends with a return to the musical routine which has now become a public dance in which the whole community of Moore Street inhabitants has joined in harmonious singing and choreography. With the dramatic expressionism of the musical’s melodrama, the generic coding of the ultimate dance sequence effectively represents the culmination of the couple’s love connection, and the narrative that began with dialogue is resolved with the dancing group’s standing final beat as the camera sweeps smoothly, vertically into a high bird’s-eye position over the crowd.

These short musical productions are the fruit of the first year of the new Film Board’s Short Shorts scheme. The seventh promotional disc containing films from 2010, offered productions challenged by the title “films with no dialogue”, while the brief for filmmakers applying last year was “Eireann go Brágh” – roughly translated as “Ireland, Forever!” – a title that worked off the back of the two international short collection projects Paris, je t’aime (2006), and New York, I Love You (2009). This year’s parameter has yet to be set, but based on the success of the first three years, we can be ensured of a future of innovative and exciting short films: one that will hopefully foster a body of native feature length filmmakers who are as adept at working creatively within generic conventions and restrictions, as they are at providing for international market demands and networks of distribution.

I would like to offer sincere thanks to Sarah Dillon, Production and Development Co-ordinator at the Irish Film Board, for her generous offering of information gathered in the writing of this article.