by Robert Finnigan. This text may be archived and redistributed both in electronic form and in hard copy, provided that the author and journal are properly cited and no fee is charged for access. 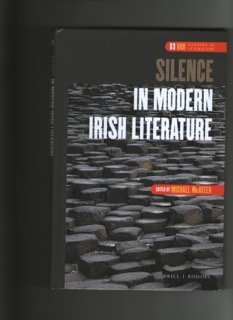 Can the silent speak, if not, who speaks for the silenced? Silence continues to be a foreboding presence in Irish studies. According to Cheryl Glenn, it is important to consider that the “rhetoric of silence” (26) has always relied upon notions of power, authorship, and agency. In an Irish context, it is imperative to understand these notions when appreciating the politics of identity that have shaped modern Ireland, particularly in the spheres of culture, history and literature. Attendees of the Silence … and Irish Writing conference held at Pázmány Péter Catholic University, Budapest in 2014 will be aware of the recent reflections on forms of silence which signify intimacy, desire, fulfilment, grief, terror, trauma, boredom, linguistic and cultural loss in Irish writing. As such, scholars from a number of disciplines will find this volume, Silence in Modern Irish Literature, filled with new and topical discussions.

Adopting the theme of silence as the conceptual framework for this volume, McAteer begins by discussing a couplet from Austin Clarke’s “The Planter’s Daughter” (1929) –

Men that had seen her
Drank deep and were silent

McAteer comments thus on these lines:

The silence to which Clarke’s lines refer carries a range of meanings that direct readers towards the complexity and the importance of silence in modern Irish literature. These include psychological, ethical, topographical, and spiritual aspects of Irish silence; themes that are explored in the present volumes of essays. (1)

Thus, taken as an exemplar, various readings of Clarke’s couplet provide a guiding marker for the introduction. Most notably, considering “The Planter’s Daughter” in relation to the Aisling tradition and the figure of the Speirbhean, McAteer writes of: “the traumatic experiences of Irish history latent within the woman as a figure of silence who induces silence in the men who see her” (2). Yet, throughout his commentary on the poem, McAteer provides readings that move beyond static interpretations and illuminates a series of refreshing perspectives regarding the significance of varied silences. In a somewhat surprising omission, however, McAteer does not include a series of aims or rationale for this study, despite the detailed overview of each of the essays contained within this collection.

Divided into four parts, “Psychologies of Silence”, “Ethics of Silence”, “Places of Silence” and “Spirits of Silence”, the essays presented cover the spectrum of modern Irish authors and playwrights. In part 1, McAteer, Emile Morin, Heather Ingman, and Alesandra V. Jovanović explore “the psychological pressures that silence contains for writers from Ireland over the past century”, namely W. B. Yeats, Samuel Beckett, Elizabeth Bowen and John Banville (3). Examining Yeats’s poem “How Ferencz Renyl Kept Silent” (1887), as well as Cathleen ni Houlihan (1902) and Where There is Nothing (1903), McAteer demonstrates that “How Ferencz” exudes Yeats’s contradictory symbolism in which silence is seen as a form of madness and a result of “political violence [and] unspeakable trauma” (23). Next, Ingman, broadly employing Julia Kristeva’s theories of language, investigates the conflict between silence and language, and compares the struggling female and dominant male characters in Bowne’s The Last September (1929), The Death of the Heart (1939), The Heat of the Day (1949) and Eva Trout; or Changing Scenes (1968). Examining Banville’s art trilogy, The Book of Evidence (1989), Ghosts (1993) and Athena (1996) Jovanović “traces a connection that Banville’s novel unfolds between Lacan’s notion of a rupture with the external world – one that is patched over with fantasy in the psychotic mind – and Agamben’s idea of painting as silent poetry” (8). Particularly worthy of note in part 1 is Morin’s chapter, “Theatres and Pathologies of Silence: Symbolism and Irish Drama from Maeterlinck to Beckett”, in which Morin explores the “silent interval that brings to light” (35) the connections between Irish and European dramatic experiments with silence. Morin notes:

There are many striking proximites between … silence emerging in the new theatre derived from Symbolism and Beckett’s later comments on his own plays as driven by forms of secrecy, ambiguity and concealment; forms which he, as the author, was unable to explicate. (45)

Drawing on various strands of Maeterlinck’s concept of the theatre as dealing with the unspoken and unexpressed, Morin demonstrates with ease its significance to Beckett’s dramas, notably Acts without Words (1957), Waiting for Godot (1953) and Come and Go (1966). Moreover, in her analysis of medical diagnosis that feature in Symbolist literature, Morin highlights the competing and plural manner in which the speech of hysteric patients was taken as a new form of silence and a way of thinking about the voice.

In part 2, Willa Murphy, Mark McGahon, Benjamin Keatinge and Alesandra Boiler centre their attention on the ethics of silence in relation to the Catholic Church, violence and gender. Analysing a range of works by Gerald Griffin, and John and Michael Banim, Murphy argues with conviction that rather than freedom and identity being inimical to secrecy and silence, they are complementary, and the seal of the Confessional is the “emblem of this paradox” (82). Similarly, in his exploration of silence as testimony, Keatinge reads a number of Beckett’s plays and Hubert Butler’s essays as illustrating their struggle against Nazism during World War II. Considering George Steiner’s assertion that silence is “the only plausible response to the Holocaust because language itself has been altered in its essence by the catastrophe” (13), Keatinge argues that Beckett’s historical experiences enable him to address the Holocaust and the Anglo-Irish Civil War. Moreover, Keatinge explores Derek Mahon’s debt to Beckett in terms of testimony and Mahon’s focus on “the large-scale calamities of human history” (13). In Boiler’s essay, Roddy Doyle’s novels are examined with particular emphasis being given to the workings and maintenance of codes of silence, and the narrative and stylistic manner he uses as examples of domestic violence and female exploitation. McGahan’s “Silence, Justice, and the Differend in Joyce’s Ulysses” deserves mentioning for his observations about the connections between silence, Irish Nationalism and Catholicism through the lens of Joyce’s writings. Focusing on “A Mother” from Dubliners (1914) and the “Nestor” and “Cyclops” episodes in Ulysses (1922), McGahon sensitively illustrates how silence can function as a coercive or liberating force, and how, in conjunction with linguistic ambiguity, such silences emphasise the instability and uncertainties of Ireland’s political status.

Moving forward in part 3, Marta Pellérdi, Anne Fogarty and Stephanie Schwerter focus on “how silence in modern Irish writing involves the issue of place” (13). Fogarty investigates Kate O’Brien’s The Land of Spices (1941), its status as a banned book because of its homosexual content, and “suggests a correlation between an erotic investment in the father, queer femininity, and the marginalized role of women” (146). Schwerter concentrates on translations of Robert McLiam Wilson’s Eureka Street (1996) and explores the challenges of translating aspects of Belfast’s urban landscape into differing environments; as well as the examples of silence that arise in the process. As Schwerter observes; “In Wilson’s Eureka Street silence manifests itself particularly in the acronyms on Belfast’s walls. As territorial indicators, they guide and misguide the novel’s characters through coded meanings of urban space” (163). Employing Elisabeth Lovelie’s concept of literary silence, Pellérdi’s chapter examines the oscillating quality and defamiliarising aspect of silence that transitions from Turgenev to Moore. Pellérdi notes:

Lovelie sees literary silence as emerging through the interaction of three main factors: “repetition, aporia, and implosion”. In this chapter, I adapt these critical terms in discussing silence and displacement in Turgenev’s “Kasyan from the Beautiful Lands” and stories from Moore’s The Untilled Field, with particular focus on “Home Sickness”. (138)

In probing such silences and examples of displacement, Pellérdi highlights the competing and plural attitudes that inform Turgenev’s and Moore’s works. Moreover, Pellérdi provides a balanced perspective that is emphasised by her selection of quotations from Turgenev and Moore, and their characters’ struggles to articulate their feelings about displacement and the resulting silences.

In the final, and perhaps most exhilarating, part, Keith Hopper, Thierry Robin and Virginie Roche-Tiengo examine the notion of ambivalence, inconclusive ends and the relationships between death, language and silence. Discussing how the process of silencing appears in Flann O’Brien’s “John Duffy’s Brother” (1949), “Two in One” (1954), The Third Policeman (1968) and An Beal Bocht (The Poor Mouth,1941/1977), Hopper focuses on the complex endings of these works, “and suggests that silence is formally and thematically central” (177). Turning his attention to An Beal Bocht, Hopper demonstrates with exceptional sensitivity that among other things it is a satire on the Gaelic Revival and language revival movement; “Silence arises in this respect in the form of Irish as a language of haunting that may only be capable of being revived in a spectral form; out of its own disappearance” (17). Next, Robin examines a number of lyrics from Dermot Healy’s Fool’s Errand (2010) and considers numerous philosophers “in addressing the qualities of silence that the collection evokes” (17) in relation to the paradox of combining art and silence. The attention Robin devotes to the forms, style and visual aspects, coupled with his attention to Susan Sontag’s aesthetics of silence and Clement Rosset’s concept of reality as “idiocy” provides a stimulating analysis that will become essential for readers of Healy’s works. Additionally, Robin’s essay is both apt and timely given Healy’s death in 2014. Similarly, Roche-Tiengo’s chapter is timely in the wake of Brian Friel’s death in 2015. In “The Voices of the Dead and the Silence of the Living in Brian Friel’s Drama”, Roche-Tiengo begins her chapter by addressing Friel’s drama “in terms of its representation of spiritual and eschatological truths that arise in Irish environments marked by stifled dreams and expectations” (201). The manner in which Roche-Tiengo explores these truths and silences, her employment of Antonin Artaud’s notion of theatre as magic and religion and Peter Brook’s theory of holy theatre as discussed across a number of Friel’s plays attest to a sensitive understanding of his meta-writing, Moreover, Roche-Tiengo is able to foreground Friel’s own perspective on silence and language by discussing Give Me Your Answer (1997) in which he “considers another aspect of the language beyond language: the survival of the created work beyond the death of its author” (210). As such, Roche-Tiengo supports her opening assertion that the dead characters are able to speak to the audience from beyond the grave. Much of the pleasure and strength of this chapter is the range of Friel’s plays she discusses; from, The Freedom of the City (1973), Living Quarters (1979), Dancing at Lughnasa (1990), Faith Healer (1979) and The Loves of Cass McGuire (1967), instead of relying, as many have done, on yet another examination of Translations (1980).

Despite the positive aspects of this informative collection, there are a number of minor quibbles that detract somewhat from the otherwise insightful series of discussions. Although the volume is devoted to aspects and forms of silence, the wider range of subjects and topics present makes recommending this volume to any specific groups(s) difficult and problematic. The number of essays in this one volume is, at times, distracting and overwhelming, and this is further evident in a number of essays which appear to be underdeveloped or too brief. Moreover, this collection employs a concerted level of academic jargon and theoretical terminology, which, at times, makes it appear dense. Given its specialised nature, however, this is an understandable reality, and attests to the level of research conducted by the contributors. Readers with an interest in modern Irish literature, modern drama, fiction and poetry; Postcolonial Studies, Gender Studies, and those interested in psychoanalytical and philosophical approaches to literature will find this a valuable and insightful collection.