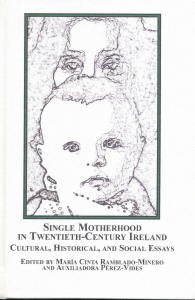 The publication of this book should be understood as an act of rebellion. Women openly writing on a fact –pregnancy outside marriage– that has haunted the Irish social conscience for decades, as Breda Gray writes in the preface: «This was a century then when shame operated as a regulating emotion that served to conceal and expel certain women’s bodies from public visibility» (i). The volume aims to explore the diverse facets of single motherhood in Ireland, a phenomenon which has caused much suffering to women due to the religious and ideological constraints of Irish society. It offers an interdisciplinary perspective for one single purpose: to write a chronicle of women who deviated from the norm.

The different chapters are selected from the papers presented at the conference of the same title which was held at the University of Limerick in June 2004. As has been stated, the most outstanding feature of the book lies in the variety of approaches employed to address the issue: unmarried motherhood is considered from the point of view of representations in popular culture, taking into account its socio-historical perspectives, and analysing its representation in contemporary film and literature.

The volume opens with a plenary lecture given at the conference by Gerardine Meaney, from UCD, which helps to contextualise the phenomenon of single motherhood in Ireland in the 20th century: the maternal body, she writes, was repressed to such an extent, that it became a ghost. For Meaney the building of a masculine, white identity for the postcolonial nation excluded deviant aspects of female identity.

The 1937 Constitution is a recurrent topic in many articles of the book, as well as the social realities for single mothers: emigration, isolation, seclusion, etc. This is particularly relevant in the second section of the book, where there is plenty of useful information on the situation of lone parents in contemporary Ireland, but one cannot help being drawn towards section three, which deals with the treatment of the Magdalene Laundries in literature and film. For many viewers from outside Ireland the film by Peter Mullan The Magdalene Sisters (2002) was the first time we had heard of the existence of the Magdalene Asylum System, where women who failed to conform to the established ideal of purity were locked in. The article by Aida Rosende-Pérez on Peter Mullan’s work provides the necessary clues and a clear analysis to understand the discourses of repression that were articulated to justify the establishment of these institutions. This is followed by an article by Paula Murphy in which Peter Mullan’s film is also discussed, together with Marita Conlon-MacKenna’s novel The Magdalen.

Other chapters in the book consider a number of literary works where the question of single motherhood is given a prominent role: Roddy Doyle’s The Snapper (1990), Mary Morrissy’s Mother of Pearl (1996) or Edna O’Brien’s Down by the River (1996), among other titles.