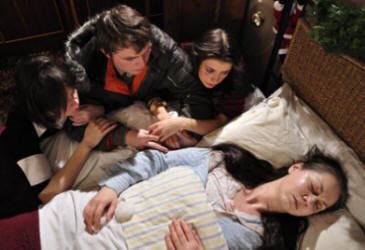 The Fading Light ends with an image of a bank of leaden clouds slowly eclipsing a setting sun as somewhere in the distance, church bells toll, children raise their voices in play, and an unsettling musical note resembling whalesong sounds. We have just witnessed the destruction of a Dublin middle-class family as the three surviving adult children initially console each other but ultimately fail to provide each other with the necessary emotional and material support in the wake of their mother’s lingering death. The film has been described as Bergmanesque; surprisingly, such comparisons neither are embarrassing nor do they diminish the film’s individual achievement.1  This is convincing Kammerspielcinema, relying on the performances of a small cast and a restrained visual style to invest an often spartan mise-en-scène with meaning. A muted colour palette and the almost complete avoidance of nondiegetic music contribute to a sombre and intense drama fittingly punctuated by fades to black.

This is the latest film from writer, director and editor Ivan Kavanagh, who has now assembled a body of work that is impressive in both its quality and quantity, including four other features (Francis,2 The Solution, Tin Can Man and Our Happy Home) completed on extremely small budgets. In the course of making both the features and many shorts, he has evolved what seems like a stock company of collaborators and a singular way of working with actors. Although Kavanagh performs many of the creative roles behind the camera himself, he has left the cinematography of all of his features to Colin Downey – himself a director of considerable talent. Often choosing actors he has worked with before or performers who resemble the characters in a skeletal script, Kavanagh presents them not with the script itself but with a detailed biography from which to develop their character. While this process resembles the improvised performance methods used by Mike Leigh, unlike Leigh, Kavanagh only reveals to his actors the relevant parts of the plot on the day of shooting, and individual actors do not know what direction the other actors in the scene have been given.3 This method aims to capture as far as possible the spontaneity of performers responding in character to unfolding events.

Set at Christmas (but with little sense of the festival of the returning light here) and taking place principally in a comfortable but also gloomy and dated 1950s-era suburban house, the narrative proceeds largely chronologically as Cathy (Emma Eliza Regan) and Yvonne (Valene Kane) arrive back to their family home to say goodbye to their terminally ill mother (Bibi Larrson). Now bedridden by chronic pain, the mother can no longer care for her son, Peter (Patrick O’Donnell), who suffers from a mental disability. Receiving palliative care from a visiting nurse, the mother admits that she has neglected to tell Peter that she is going to die, and it becomes clear that the responsibility for informing him will devolve to her daughters and that this will be just the first stage in the greater responsibility of deciding on Peter’s fate after their mother’s death. At first, it seems that Yvonne will have to care for him because Cathy – although closer to Peter – is a struggling actress and waitress who has neither a large enough flat nor the likelihood of financial security to allow her to look after him. Married and with a well-paid professional job, Yvonne, by contrast, appears to be in a position to take Peter into the stylish London home she shares with her husband, Tim (Henry Garrett).

Although Patrick O’Donnell deservedly won the Dublin Film Critics Circle award for his performance as Peter,4 in many ways this is Yvonne’s story, with particularly Kane as the adult Yvonne but also Jodie Boyle as the young Yvonne most often commanding our attention. It is most frequently her motivations that we must decide from the fragments of the narrative that are presented to us. Despite Yvonne’s apparent success, all may not be as stable as it seems in her life. An unsettling pre-title sequence whose full significance is only revealed in the film’s closing minutes suggest that she has problems that extend far beyond her upset at her mother’s imminent death. Her arrival back to her family home immediately invokes black-and-white visions of the young Yvonne. These scenes, in which she interacts with a loving father (Cillian Roche) who appears to have predeceased her mother, evoke both an acute sense of loss – of the father, of the rapidly fading mother, and of the happy little girl – and foreboding of a traumatic revelation to come. Nevertheless, living seemingly carefree in a house full of light, these ghostly projections of Yvonne’s past seem at first to be enjoying sunnier times, in many senses, than Yvonne herself. Visiting her mother’s dim bedroom on her return for the first of their emotional encounters, she says that they have once again become “one big happy family,” a phrase that resonates hollowly between them.

Two further scenes in this bedroom between Yvonne and her mother complicate this initial image of the successful emigrant daughter guiltily returning to the mother left to care alone for a son with special needs. Before the first, we are shown the young Yvonne discovering the body of her father hanging from the hatch to the attic. In the bedroom, Yvonne touches the hand of her sleeping mother, who, waking and crying, asks if Yvonne remembers her father and his love for her, before apologizing for the fact that she was the one who found him. Affecting as the scene undoubted is, the outpouring of emotion has a cathartic effect, allowing Yvonne and her mother to come to some kind of resolution to the strain in their relationship caused by the father’s suicide. The visions of young Yvonne become less frequent after this point, but the occurrence immediately after this scene of the other irruption into the otherwise linear narrative – the image of Yvonne from the pre-title sequence, standing leaning on her kitchen counter with her back to the camera – clearly signals that not everything is resolved. In their third encounter, the mother elicits a firm promise from Yvonne that she will look after Peter and not put him into care.

While these encounters occur, several scenes show the growing closeness between the three siblings but also Yvonne’s emerging role as the surrogate mother. In a joyful scene following Yvonne’s cathartic scene with her mother, Peter puts a record on the gramophone – an anachronism that seems to suggest that music and joy are a thing of the past – and he and his sisters dance in the living room and with the music continuing on the soundtrack, play outside in the snow. Such scenes offer a return to childhood intimacy, a temporary respite from the fact of their mother’s pain and a vision of an alternative family. When they return to the house in high spirits, however, Yvonne tells Peter that their mother is dying. He becomes distressed, and while Yvonne successfully calms him by reassuring him that she and Cathy will look after him, an upset Cathy leaves the house and finds a doll on a muddy river bank. Parallel cuts show Yvonne holding one of her own dolls, and although this causes her to again think of her father, it also creates a link with Cathy that suggests that they can together reconnect with their youth, perhaps by coming to an arrangement to look after Peter.

Two disruptive events – one expected, the other not – alter the dynamic among the siblings. The first is the awaited death of the mother, which occurs after several further scenes, which although harrowing, show the siblings’ intimacy in grief. What is remarkable in the context of an Irish death, however, is the lack of a funeral scene. The effect of this is to emphasize the isolation of the family from a supportive community, the only help they receive coming from such professional carers as nurses and doctors. Instead of the growing cohesion of the surviving family being nurtured by the comfort of neighbours and friends, Yvonne’s husband, Tim, arrives to brutally force them apart. At the precise narrative point where an Irish audience would have expected to have seen a long shot of an assembly of mourners, a closeup of Tim’s profile as he scornfully watches Peter signals the unlikelihood of any happy ending. Tim is played as a strident bully, who with very little resistance from the grieving Yvonne and Cathy, takes control of the family’s affairs, selling the house and putting Patrick into care. The orderly who arrives to take Peter away has to spend much of his time calming Tim, who shouts at Peter, Yvonne and Cathy to make them comply with his plan. “Are you ready to come on home now?” he asks Yvonne, crying in Cathy’s arms. “Have you had enough?” Ominously, we see a vision of young Yvonne with her mother before she answers “yes.”

The conclusion confirms that it is to Yvonne as much as her mother that the title refers. We return to the shot of Yvonne in her kitchen before she opens the gas on her cooker and gets back into bed with a sleeping Tim. The fates of Peter and Cathy are less certain. Peter leaves the hospital and walks away into the night. That we should fear for his safety is suggested when Cathy wakes in the family home where a phone is ringing. When she answers, there is nobody there. She dresses, packs, takes a last look at her mother’s deathbed and leaves the house. A slow fade to black.