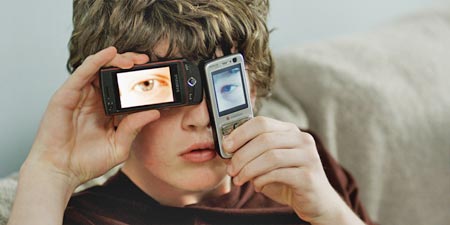 Awarded best Irish film, and best Irish director for Carmel Winters at the Jameson Dublin International Film Festival, Snap is arguably the most impressive Irish feature of 2010. The film’s narrative revolves around a mother’s relationship with her teenage son, a theme that Winters visited previously in her script for Collette Cullen’s short film Odd Sock (2000) which also dealt with secrets and a confusion of identity between mother and son. Snap, however, is a darker, more ominous tale that engages the familiar tropes of Irish dysfunctional families, child abuse and the malign pervasiveness of the past through our present life.

This deployment of multiple lenses in the film’s cinematography invokes a fragmented reality that is provisional and unstable. Its juxtaposition of various shooting styles, from a mixture of faux ‘found footage’ and amateur documentary, with mobile phone recording and conventional drama techniques, supports a patchwork narrative that looks back over past events. The film thus underscores the fallibility of the photographic image and foregrounds the unreliability of memory itself. It suggests that even in the contemporary world, when memory no longer resides in our imaginations but is tangibly on record in photography, film or tape, there can still be no claim to veracity. The fractured effect of narrative and cinematography is further emphasised through rewinding, fast-forwarding and pausing the action in the edit, as though we are seeing the filmmaker in the process of reviewing his footage. This might suggest an experimental, esoteric approach to telling this story, but in fact the end result is a film that engages the attention throughout and allows the viewer to be led through the twists and turns of the plot without any major confusion or real disorientation. What this rupturing of narrative, visual and editing structures does achieve is a strengthening of the forceful characterisations and performances which illustrate the ubiquitous presence of the camera in everyday modern life and the mediated nature of reality on-screen.

Snap, however, is primarily a new take on that old perennial: the Irish mother; and in this sense it is a conventional Irish film. It is a dialogue with the prevailing cultural stereotypes of Irish femininity, in which women are “desexualised and venerated as pure mother” in a dependent, passive and domestic selflessness (Nash 1997: 110-114). As Elizabeth Cullingford (2002: 186) points out, the enduring myth of the mother in Irish culture has been used to symbolise a conflict between tradition and modernity and as an icon of nationalist sentiment. Most often embodied in the figure of the Virgin Mother, the Irish mother ideologically links Catholicism and Irishness,1 and is an image that resonates through Irish cinema. In Snap, Sandra’s (Aisling O’Sullivan) choice, or her regret, that, rather than a mother, she wanted to be a nun, can be read as revolving around this fundamental cultural contradiction. It could also be argued that the absence of any explicit reference to Stephen’s (Stephen Moran) father bears out the notion of a virgin birth, or at least an Irish version of a virgin birth, where the woman hasn’t had pleasure in the sexual act, maybe as a result of force, or, at best, coercion. The virgin mother becomes a subtle presence in this film and reinforces its links with The Butcher Boy (Neil Jordan, 1997) through the casting of Aisling O’Sullivan, who played Francie Brady’s mother in that film as well as by physical similarities between Stephen and Francie Brady (Eamonn Owens).

O’Sullivan’s performance also reminds us of popular culture and cinema’s stereotype of the feisty Irish female, which originated in Hollywood star Maureen O’Hara. Sinead O’Connor is an obvious example, outspoken and challenging convention, she is also the quintessential Irish single/virgin mother. Having embodied the virgin mother both in The Butcher Boy, and in its original incarnation in Hush-a-bye-baby (Margo Harkin, 1988) she is well known as a single mother who also serves as a priest. In addition she has been “Ireland’s most visible crusader against child abuse” (Cullingford 2002: 193). This characterisation of a feisty Irish woman can be found to encapsulate the contradictions in Irish femininity: aggressive and defensive women, who also suggest something of the pure, unsullied, devoted and chaste nun. Snap further deploys ideas of the Holy Trinity, in its rendering of the relationship between the Father, the Son and, rather than the Holy Spirit, the Virgin Mother, who takes her rightful place in the centre of this triad. Indeed, the grandfather’s (Pascal Scott) parental relationship to Stephen and his status as patriarch in the film, reconfigures this Catholic idea by invoking the essential “incestuous edge” of oedipal conflicts at the heart of Irish national identity (Curtin 1999: 39). Thus the film offers a counter to stereotypes of the Irish family and to the staple Irish matriarch, like the one played by Brenda Fricker in My Left Foot (Jim Sheridan, 1989) or its opposite, the put-upon wife, as, for example, played by Angela McCourt in Angela’s Ashes (Alan Parker, 1999). Snap’s construction of the Irish mother is a much more complex and layered representation than such conventional portrayals.

In this way, Snap can be found to flesh out the strong female characters of Irish cinema, with an intimation that Sandra’s defensive aggression results from a past trauma. Her shades of the stereotypical feisty Irish colleen also suggest cinema’s ambivalent relationship to such characters, fetishizing “the strong female while simultaneously working to undermine her” (Barton 2006: 145). The film’s play on the mediation of reality by cinema, and media in general, highlights the scapegoating of women, and especially of the mother, in culture. We are reminded of the documentary techniques of confessional talk shows and reality television, popular intermediaries in contemporary women’s lives. We also sense Sandra’s familiarity with these genres, on the one hand she is aware of how to perform for the camera, on the other there is a certain naivety in her understanding of how this performance might be managed in post production. For example, in one scene she asks the filmmaker to delete her swear words and replace them with something more acceptable. In this way she ascribes a sort of power to the filmmaker to construct a version of her, and this points to her awareness that the camera distorts, but not how it distorts.

Throughout the film Sandra is at once suspicious of the camera’s power and confident in her ability to make use of it to get her story across. Her suspicion of the camera is a reminder of Nora Barnacle (Susan Lynch) in Nora (Pat Murphy, 2000), who is aware that the writer James Joyce twists her words and who struggles to retain her own identity in the face of his appropriation (Barton 2004: 118). Sandra’s mixture of resistance to, and complicity in, the camera’s objectification of her signals a similar complex interaction with the subject/object position of women in cinema. Her shock at how she sounds, and how she looks, when she sees herself on tape is a reminder of her powerlessness, echoed later when she fails to recognise herself in the snapshot of the child. Furthermore, likeNora, Snap suggests a conflict between word and image in the pause, fast-forward and rewind sequences, early in the film. Whist these sequences foreground the role of the filmmaker in fabricating reality, they also demonstrate a tension between the words she speaks and her face as spectacle, and how her image is privileged over her words by the force of this male gaze.

Although Snap can be seen, as in Sandra’s own words, to ‘set the record straight’ by lending a voice to the mothers who have been elided in these narratives of “the abused child of history” (McLoone 2000: 213), this is not a simplistic corrective to previous exclusions. The use of camera and editing devices to foreground the mediation of her account remind us that such direct, ‘straight’, representations of her side of the story are impossible. We learn that the camera is wielded, not only by a male, but by one who is far from disinterested and who has his own dysfunctional obsession with the object of his gaze. Ultimately she remains trapped in the camera’s gaze, despite her attempts to assert, or to bury, her truth. Snap, whilst it dismantles some of the shibboleths of Irish culture, does not unravel the primacy of traditional social and family relations but implies that we all end up as victims of these same power structures.