by Seán Mac Liam. This text may be archived and redistributed both in electronic form and in hard copy, provided that the author and journal are properly cited and no fee is charged for access. 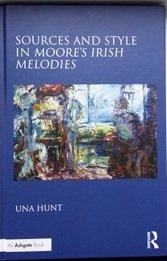 One would have thought that research on the subject of Moore’s Irish Melodies had been exhausted and that little of consequence remained to be discovered. However, Una Hunt’s latest book not only extends the scholarship on this subject but also contextualizes newly discovered insights within a synthesis of existing knowledge on the topic. Professor Harry White’s forward and the author’s own introduction set an ambitious expectation of the book that, for the most part, is realized in subsequent chapters. The book is logically structured and includes consideration of Moore as poet, musician and song writer, the political and literary imagery within the song texts, the poet’s collaboration with composers Sir John Stevenson and Henry Rowley Bishop, an analytical overview of the songs and a discourse on sources. Her conclusions are original and significant. The work is liberally referenced, contains 66 musical examples in addition to pictorial illustrations and includes a comprehensive appendix of sources, a useful index and a wide-ranging bibliography.

In situating her research within the panoramic context of existing knowledge, the author challenges some accepted beliefs about the melodies. Referring to the militarist and rebellious imagery in the texts and the use of surreptitious code words and motifs redolent of the songs of the United Irishmen, she ponders the association of Moore’s songs with Victorian drawing room songs. Although, given the prevalence of folk song arrangements at this time – a lure that attracted even the great Haydn and Beethoven among others – Moore’s market was essentially the early nineteenth century Irish, Anglo and Anglo-Irish middle and upper classes, and such sentiments would have been perceived to be in poor taste and even traitorous among this clientele. However, in her consideration of “the power of song in promoting ideology” (135), particularly that of the United Irishmen, the author shows how Moore had a particular capacity to conceal such sentiments in songs of love and loss, of minstrelsy and within Irish story and legend of gentler hue. Because of the prevalence of such concealment one might question the extent of awareness of Moore’s particular subtext. Hunt’s belief, however, is that Moore’s texts were so skillfully crafted that their hidden rebel sentiments represented “a tactic of unspoken collusion between all the participants – Moore and the consumers of his songs, both performers and listeners” (27).

The author’s re-evaluation of Moore’s primary sources extends previous scholarship. Its “most significant conclusion reached is that Holden, and not Bunting, was Moore’s most utilized source” (105), thereby undermining many of Bunting’s accusations regarding alterations made to the character and tempi of the original source airs. Au contraire, Hunt shows that “the source material used in the Irish Melodies was multifarious, coming from printed collections and manuscripts while other tunes were notated by Moore from memory.” (138) Furthermore, Moore was remarkably faithful to the original except where a tune needed to be adapted to best suit its conversion from instrumental to sung mode and “in every case … Moore drew attention to such substantial amendments in footnotes” (131). Because the Irish Melodies were written as songs, it is the song genre and the interrelationship between words, melody and accompaniment that are central to Hunt’s discourse.

One of the more interesting aspects of the book – the composing process involved in creating the Irish Melodies – is curiously the one that might be considered most contentious. Hunt’s analysis throughout chapters 2, 3 and 4, is insightful and affirms the consensus view that the songs are better than their reputation suggests. In identifying supporting musical evidence for this belief, the author alludes to various musical features characteristic of art songs that insinuate arguments favouring a reclassification of Moore’s songs. This debate is of course an important one given the metaphysical and inspirational nature of the creative process. However, the implication that these essentially parlour songs deserve reclassification as art songs sits somewhat uneasily with an art song’s promise of the highest quality and craftsmanship where there is a high degree of musical organization, imaginative interaction and interdependence between poem and music – in short where each element of the mix, composed concurrently, serves a composer’s inspired musical vision. While the author’s points are undeniable and well made, others might argue that, in the case of the Irish Melodies, these features are neither sufficiently endemically present nor systematically employed throughout the composing process to warrant reclassification – nor could they be, given the distinct and separate involvement over time of each of the parties in the enterprise. Hunt’s implication untangles further with the widespread perception of Stevenson’s and Bishop’s work as unsatisfactory, which led to new settings possessing greater musical significance by William Balfe, Charles Villiers Stanford and Benjamin Britten, among others (4-5).

Considering the central role of composers Stevenson and Bishop in the enterprise, Hunt re-presents the well-established reasons for the bad press accruing in particular to Stevenson. Apart from his failure to engage wholeheartedly with the project resulting in many errors, Stevenson was “caught in a compositional time warp” and “slavishly followed Haydn as his model, even though this approach was patently unsuited to traditional music” (75). The more fastidious Bishop, on the other hand, because he was a more accomplished composer with greater experience in theatre music, was more successful in integrating elements of the melody into his piano parts and, in this way exhibited greater unity within the songs. Hunt also notes a trend, not present in Stevenson’s contributions, where in some of the later songs “the material used by Bishop in the vocal accompaniments is also altered from one verse to the next, subtly complementing Moore’s text and elevating the strophic verse towards a more sophisticated art song” (90). In mimicking aspects of the Romantic art song Bishop’s accompaniments offset Stevenson’s over-stylized and somewhat careless approach to the piano accompaniments. However, while acknowledging Stevenson’s flawed contribution to the solo settings of the melodies, Hunt gives a more positive assessment of the composer’s part song arrangements of the airs. “Not only did Stevenson write his more interesting settings for the part songs in the Irish Melodies cycle, he generally took more care over these, as there appear to be fewer printed errors” (67). Because at this time the money followed the prevailing fashion for folk song arrangements for solo voice and piano – hence the initial popularity of Moore’s Irish Melodies – Stevenson’s part song arrangements were considerably less in demand, although on Hunt’s account, they are,

almost without exception, fine compositions providing a snapshot of some of the composer’s best work … Had he been judged on his part song writing, in which he excelled, his reputation might not have been irreparably damaged by the criticism that came his way. (137)

And so, how might future scholarship on Moore’s Irish Melodies be accomplished, given the exhaustive and groundbreaking nature of Hunt’s research? Curiously, she may have unwittingly given a pointer in her preliminary references to the melodies’ afterlife and their positive reception beyond the English-speaking world affirmed by several noted nineteenth-century translations into French, Spanish, and German. Notwithstanding this, there was at least one attempt to reclaim Moore’s work for Gaelic Ireland when in 1871 the Rev John McHale, Archbishop of Tuam, published Irish language translations of selected melodies. In spite of McHale’s now largely forgotten translations, and with the growth of the Irish cultural imperative during the early years of the twentieth century, the popularity of Moore’s melodies waned chiefly because they were associated with an Anglo-Irish rather than a Gaelic-Irish tradition. During this period, the songs survived extinction by going culturally underground, and re-emerged decoupled from their piano accompaniments during the early years of the Irish Free State as Irish national songs in English. With this newly acquired status, Moore’s Irish Melodies were celebrated by an entirely new generation encompassing all social classes although, as befitted the national cultural objectives of the time, it was the song texts rather than the tunes that dictated significance and value. This was especially so during the period 1922 up until the 1960s when Moore’s marching songs, laments and songs linked with ancient Irish lore became an indispensible part of the national repertory and were taught in schools the length and breath of the country. Thus, songs like “Avenging and Bright”, “The Minstrel Boy”, “The Harp that Once through Tara’s Halls”, “Let Erin Remember the Days of Old”, “Tis the Last Rose of Summer”, “Believe Me If All Those Endearing Young Charms”, “Oh! Breathe Not His Name”, “She Is Far From the Land”, and “Silent, Oh Moyle!” became cemented into the national repertory.

It is no coincidence that the survival of Moore’s input into the project (i.e. tune selection and composition of words) is inversely proportional to the demise of Stevenson’s and Bishop’s contributions. However, on Hunt’s account, this was not a matter of chance because Moore was extremely fastidious in composing words for his chosen tunes. Citing Ronan Kelly’s 2008 epic biography Bard of Erin, she reveals Moore’s working method:

Of paramount importance was the matching of the pace and manner of the music, as he perceived it, and a surprisingly close bond was achieved between words and text through the process of walking and pacing, which were crucial activities in his song-writing process. (35)

In this way, the words emerged naturally to closely fit the configuration of the tune, a characteristic that is noted in most folk songs and this is key to understanding their endurance over time as well as their survival within the national repertory. Hunt’s concluding assessment of Moore and his Irish Melodies is relevant.

The alliance between words and music, added to the successful translation from one performance mode to another, must surely mark him out as a songwriter of note. These very qualities continue to ensure that Moore’s Irish Melodies will endure as long as Irish song is celebrated. (139)

This was an enjoyable and engaging read. While the author’s enthusiasm for her subject shines consistently throughout the book, her complex and deep understanding of her topic is never in doubt, nor is her ability to communicate with clarity and insight.