by Maureen Hawkins. This text may be archived and redistributed both in electronic form and in hard copy, provided that the author and journal are properly cited and no fee is charged for access. 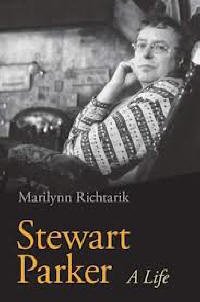 Meticulously researched and engagingly written, Richtarik’s biography of the stellar Northern Irish playwright, Stewart Parker, does an excellent job of cementing the reputation of a writer who died too young (Richtarik 2012: 47), at the height of his powers, just as the full quality of his work was being properly recognized.  She draws on his diaries, an autobiographical novel he never published but kept returning to, and other private writings as well as extensive contacts with his friends and associates and a thorough knowledge of everything he ever staged, broadcast, and/or published.   The author paints a picture of a Protestant working-class Belfast youth who overcame obstacles, including the amputation of his leg for cancer at age 19, and disappointments that would have felled most people, in order to create a body of work that has led many to compare him favourably to Brian Friel.

Born in 1941, he was fortunate enough to begin his secondary education after the British government’s educational reforms had established a route to university for promising working-class students.  Bright and gregarious, he took to university like a duck to water and soon became the centre of numerous creative groups at Queen’s University, where fellow students included Seamus Heaney and Michael Longley.  Partway through a Master’s thesis on poetic drama (which he later finished and submitted), he took the opportunity to broaden his horizons further by teaching at a university in the United States. After three years, he decided it took too much time from his creative work and returned to Belfast.  There, often in penury but always surrounded by friends (he had a gift for friendship), he wrote for radio, television, and the stage as well as a column on pop music for the Irish Times against the backdrop of “the Troubles” in the North.   Later he moved to Edinburgh and, finally, London.

Like most writers, he received his share of rejections, but his being a playwright made it worse; much of his story is one of repeated disappointment as production after production–even of commissioned work–is cancelled, usually due to lack of money, change of producers, or unavailability of actors, directors, or venues.  The only major plays that actually debuted as scheduled with the groups that commissioned them were Northern Star (Belfast’s Lyric Players) andPentecost (Field Day).  Despite all this and family problems to boot, he kept up a staggering writing schedule, revising constantly, and keeping a cheerfuldemeanour, though bad reviews wounded him deeply. His focus and his ideal audience, even after he moved to Britain, was Belfast, though until Northern Star andPentecost, he had to rely on Dublin and London for premieres.  Influenced by Sam Thompson’s Over the Bridge, he worked to give voice to his people and the agony caused by sectarianism while, at the same time, attempting to ameliorate it, in works ranging from early BBC Schools Department broadcasts likeThe Bus Stories (1972-3) to late plays like Northern Star and Pentecost.  Richtarik points out that even plays like The Kamikaze Ground Staff Reunion Dinner, “a send-up of British films of the immediate post-war period,” have their Northern Irish dimension; she says: “its real targets were fanatical nationalism, hero worship, and the cult of blood sacrifice, all of which sustained the Troubles.”  This is not to say that Parker is a dull, humourless propagandist; one of the striking features of his work is its humour, indeed its “light-heartedness”; even his darkest play, Nightshade, a “meditation on how people confront  — or fail to confront — loss and the fact of mortality,” incorporates magic tricks and music.

Richtarik seamlessly interweaves the events of Parker’s personal and professional life, his reading, the public events that he lived through in the North that affected his work, and the intellectual currents of the time with critical discussion of his works in ways that illuminate not only the significance of their context but also draw attention to their artistic quality and major themes.  The result is to make the reader want to rush to read or reread every one of them (which, thanks to the publication of his collected Plays in 2000 and the publications of his television plays and selected non-dramatic writings and music reviews in 2008, is now possible for his major work). She also creates a portrait of a man whose death was a human as well as artistic loss to the world. When one reads of his personal happiness and professional success in the last few years of his life, it is with the pleasure that one would feel for a dear friend.

Richtarik has accomplished the very difficult task of writing a biography that will appeal equally to the scholar and the general reader.  Its great, well-documented detail will make it an invaluable tool for the specialist, while its general readability and feeling for the subject will recommend it to a larger audience.  For the benefit especially of the latter, she provides generous plot summaries not only of Parker’s work but also of other works referred to from the Deirdre legend to Behan’s The Hostage, as well as detailed accounts of important events in Northern Ireland during Parker’s life that are reflected in his work.  This breadth of audience, however, leads to one disturbing quasi-omission.  She completes her account of Bloody Sunday without mentioning the results of the Saville Inquiry, saying only that “The soldiers claimed to have been fired on first, but those on the march had a starkly different perspective.”  Although she corrects that omission in an endnote, the general reader is unlikely to read them because most of the endnotes are source notes only, and one may come away with the impression that what happened is still in dispute and that the marchers may have fired on the troops.

That minor quibble aside, this is a welcome and exemplary critical biography of a playwright who clearly deserves the love, skill, and effort she has put into it.  She dedicates it to “the friends of Stewart Parker, old and new,” and I predict that it will make many new friends as well as rewarding the old ones.