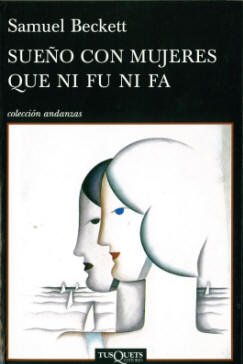 Samuel Beckett wrote Dream of Fair to Middling Women in the summer of 1932, in Paris, when he was 26 years old and after having resigned from his teaching post at Dublin’s Trinity College. Aware of the fact that Irish censorship would not tolerate its sexual explicitness and linguistic eccentricity, Beckett sent the manuscript to different British publishers, with no luck. He decided, then, to include some of its material in the collection of stories that was to be published in London, in 1934, as More Pricks than Kicks. After his initial desire to see Dream published, and as he progressed along his literary career, Beckett became more and more critical of his early work, forbidding the publication of this text in his lifetime, so that it did not appear until 1992, three years after his death.1  This work, hence, has long been unavailable for the general public, and its Spanish translation is indeed to be celebrated, even more so if we bear in mind that it has only been translated into three other languages: Japanese, Dutch and German.

When he wrote Dream, Beckett had only published the essay “Dante… Bruno. Vico.. Joyce” (1929), his prize-winning poem,Whoroscope (1930), the monograph, Proust (1931), and a few other minor poems and short prose pieces. Therefore, as the Spanish translators point out in their insightful postscript to the text, this work belongs to the very first Beckett, the Beckett before Waiting for Godot (1949) and the Trilogy (1951, 1953), whose style was very different from the austere and purified one he was going to adopt in his maturity. Dream is an erudite, allusive and macaronic text, characterized by narrative and linguistic playfulness, inventiveness and exuberance. In this sense, it constitutes a quintessential modernist work with an obvious influence of James Joyce, in whose circle Beckett had been accepted when, from 1928 to 1930, he worked as English teacher at the École Normale Supérieure in Paris, and whom he had assisted in the French translation of his Work in Progress (later to becomeFinnegans Wake). Beckett’s first novel poses, then, a huge challenge in terms of translation, and José Francisco Fernández, a scholar specialized in Beckett, and Miguel Martínez-Lage, well-known for his translations of English literary works and other texts by the Irish writer, have indeed accomplished an impressive achievement.

In terms of narative features, Dream of Fair to Middling Women subverts and undermines many of the traditional conventions associated with plot, characterization and narration. As put by Pilling, “Beckett’s Dream makes use of so many negational strategies that they virtually defy classification” (2005: 172). The novel is divided into five sections, entitled “ONE”, “TWO”, “UND”, “THREE” and “AND”, and translated as “Uno”, “Dos”, “Und”, “Tres” and “Y”. By keeping the original German connective “und”, the translators maintain the multilingual dimension of the titles, a right move on their part. The incorporation into the Spanish version of an index with the sections’s titles may give, at first, the impression of some kind of structure and order in a text that lacks any coherent and balanced structure whatsoever, as the varying lengths of the sections highlight: “Uno” (1 page), “Dos” (124 pages), “Und” (36 pages), “Tres” (108 pages) and “Y” (3 pages). In the first section, the whole of Belacquas’s childhood is told in only two paragraphs, whereas the subsequent ones deal with Belacqua’s abortive attempts to establish a meaningful relationship with three women, Smeraldina-Rima, Syra-Cusa and Alba, and with his journeys from Dublin to Vienna, Paris, Germany and back to Ireland. But those external incidents are just a tiny part of what King (2005) has called a “plotless” plot, given the lack of meaningful relationships between characters and of causal relations between events. For the most part, what we encounter are Belacqua’s confused thoughts and disordered perceptions, constantly interrupted by a collective narrator whose metafictional comments suggest that s/he is almost as lost as the reader: “El hecho es que no sabemos muy bien dónde nos hallamos en esta historia” (21). Hence, as Pilling has stated, the sections’s titles, far from being genuine connectives, are “simply the means whereby additional material can be conveyed”, since we are not provided with actual motives and reasons for continuity (2005: 172).

In terms of language, the text’s multilingual quality is one of its most conspicuous features. Together with English, the reader will come across words in French, German, Italian, Spanish and Latin. Though in the original text Beckett did not italicize foreign words, the Spanish translators have opted both for italics and for the introduction of the Spanish translation in explanatory notes. This has the advantage of facilitating a too demanding and possibly even frustrating reading, though it goes against what we assume may have been Beckett’s desire to keep all the different languages at the same level in a homogenized amalgamation. There are even passages entirely written in a foreign language, like the letter in French that runs along several pages (20-22) and that Fernández and Martínez-Lage present in Spanish (33-35), probably due to its length. They maintain, however, the French language in the shorter conversation at the beginning of section “Tres” (173-175). In the case of foreign words or phrases easily intelligible to the Spanish reader, no translation accompanies them, as in “pianissimissima” (45), “choquant” (55), “per faecula faeculorum” (63), “ami unique” (67), “Domine, non sum dignus” (95), or ‘merde’, a word that keeps appearing throughout the text. In other cases, the translators have turned the non-English word into a Spanish one: “Anatomiestunde” (14) becomes “clases the anatomía” (27); “Stefanskirch” (30), “catedral” (45); or “recueillement” (119), “recogimiento” (146). Hence, in the “tension between comprehension and opacity” created by Dream’s “multilingual amalgam” (Lalor 2010: 53), Fernández and Martínez-Lage have strengthened the former, but without excessively domesticating or simplifying the text. They also enhance comprehension by indicating in the explanatory notes which phrases belong to other literary works, thus alerting the reader to the high amount of literary allusion that this narrative contains.

Throughout the Spanish text, the reader can feel the great extent to which the translators have become infected with Dream’s “turmoil of language” and Beckett’s “delight[s] in language” (O’Brien 1992: xvii) – often going together with a strong sense of humour –, which infect the reader as well. As regards Beckett’s “sheer joy of inventing new words and coining new phrases” (ibid.), his playful manipulation of sounds, spelling and morphology, the solution, on some occasions, has been to find an equivalent in standard Spanish words. Thus, “pizzicatoing himself” (18) becomes “sirviéndose del pizzicato” (32); or “whirlijiggery-pokery” (137), “vertiginosos tejemanejes” (165). But in most cases, the translators adopt Beckett’s irreverent and inventive stance towards language, which is materialized in words such as “sienpre” (74), “clitoridiano” (137), “trogloditizarse” (151), “uterotumba” (161) or “pedincurabilidades” (162), and in wondeful moments such as this one: “Su mirada era lasciva; giraba y rondaba luxuriosa y golossamente; sus ojos eran agentes de su celo, ojos de basilisco, cazadores y garras de Amorrr” (68). Beckett’s fascination with sounds and their combinations can be felt throughout Fernández and Martínez-Lage’s brilliant translation of English onomatopeias, alliterations and rhymes, as in “blop-blop, blop-blop a cada paso, todo blandenguería” (27); “polvos de pecho de pichón” (137); or “el intríngulis, el meollo de toda la maraña, por la mismisimosidad de nuestro galán” (139). Last but not least, Fernández and Martínez-Lage are faithful to Beckett’s convoluted syntax and “cluttered style” (King 2005: 135); to his playing with spaces of varying length (55, 79, 161) and asterisks (74, 77, 80, 83) to separate chunks of text, with capital letters (85, 86, 117, 183, 252), and with punctuation (104, 261); and to his introduction of elements such as musical scores (131, 271).

With the translation of Dream of Fair to Middling Women into Spanish, all major works by Samuel Beckett are available in this language now, which we hope will contribute to the continuity and growth of Beckettian studies in this country and to the  re-edition of old  and  unavailable translations.  In  a superb exercise of linguistic and stylistic virtuosity, Fernández and Martínez-Lage have produced a text that will provide readers with  an  exhilarating and challenging experience that only Belacqua’s last word in the novel can encapsulate:  “Himmisacrakrüzidirkenjesusmariaundjosefundblütigeskreuz!” (281).

King, John. 2005. “Reading for the Plotless: The Difficult Characters of Samuel Beckett’s A Dream of Fair to Middling Women”.Journal of Modern Literature 29.1. 133-152.

Pilling, John. 2005. “Something for Nothing: Beckett’s Dream of Fair to Middling Women”. Beckett, Joyce and the Art of the Negative, ed. Jaurretche Colleen. Amsterdam: Rodopi. 171-179.