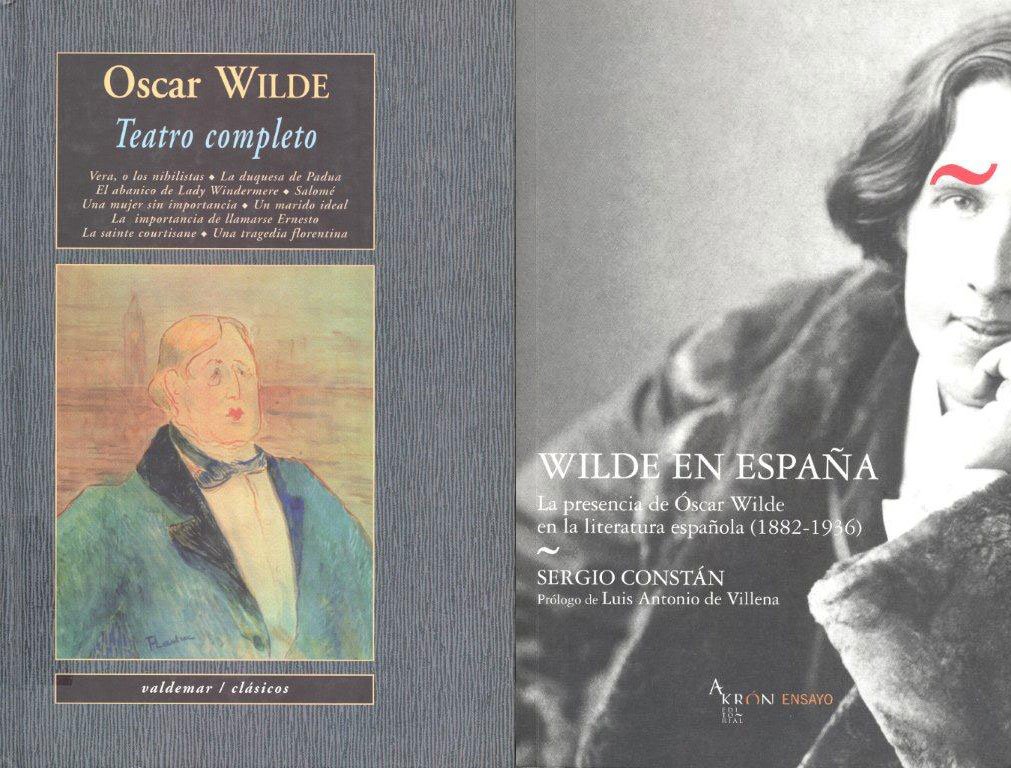 Literary critic and translator Mauro Armiño has edited the complete plays of Oscar Wilde. The Irish writer’s dramatic works are of course well known in Spain and there are several editions of his plays on the market, but so far nobody had edited all his plays in an unabridged single volume in Spanish. Mauro Armiño has to his credit previous experience translating Wilde; his are the recently published El retrato de Dorian Gray (Austral Espasa, 2000) and Cuentos completos (Valdemar, 2007). Armiño was also responsible for a celebrated version of Salomé, which was brought to the stage by the famous director Miguel Narros in 2005 and starring María Adánez, published by Valdemar in 2006.

The relevance of the present volume is that it has the benefits of a critical edition while at the same time offering Wilde’s plays in an accessible text. It begins with a well-informed introduction, a chronology of Wilde’s life and a bibliographical list, although this one is perhaps too basic.

All the plays that constitute Wilde’s canon have been translated by Armiño: his two initial tragedies, tentative approaches into the world of drama: Vera, or the Nihilists and The Duchesse of Padua; his four comedies, prodigies of verbal orchestration: Lady Windermere’s Fan, A Woman of No Importance, An Ideal Husbandand The Importance of Being Earnest; and two unfinished plays:La Sainte Courtisane and A Florentine Tragedy. The volume also offers Armiño’s version of Salomé, that “miracle of impudence” as an English censor dubbed it. Each play is accompanied by erudite notes at the end of the book.

The prologue to Teatro completo is really remarkable, a complete lesson on Wilde the dramatist in more than 50 pages. Armiño begins his introduction by rightly asserting that young Wilde created a mask with all the elements of dandyism that he aspired to, and he spent the rest of his life trying to live up to those expectations. Wilde became firstly attracted to the theatre because of the glittering glamour of the stage and the fashionable world of actors, only to later discover it as his true vocation. Once installed in the world of theatre, he moved effortlessly in it, establishing friendships with the great artists of the day, like Lillie Langtry or Sarah Bernhardt.

Although his vast accomplishments were part and parcel of his writing, Wilde conscientiously chose to produce commercial theatre for the upper classes of Victorian London: he was a social event himself and he revelled in the world of high society appearances which he unveiled with his paradoxes. Armiño insists on Wilde’s not being completely original in the plots for his theatre, having the classics, Shakespeare, Restoration Comedy and contemporary French and English authors as his immediate sources. What was revolutionary in Wilde was his use of language, as words were not condiments to season and spice the action, but the full protagonists of the plays.

Armiño carefully proceeds to explain the origin of Wilde’s relatively small number of plays, the theatrical history of each of them and his evolution as a playwright, from the modest premiere of Vera in New York in August 1883, to the great success of Earnest in London in February 1895, a few months before being arrested and taken to prison. Wilde’s fall into the hell of ignominy and public rejection is duly told by the editor. Not surprisingly, Salomé takes up extensive coverage in the prologue, no doubt reflecting Armiño’s fascination with Wilde’s amoral one-act piece. With the description of this play he even enters into the territory covered by the second book recently published on Wilde, Sergio Constan’s Wilde en España.

Researchers who work in reception studies face a particularly demanding job, as they have to trawl through scattered archives in order to discover the traces left by their authors’ presence in a wide range of places: in the periodical press, in literary journals, in memoirs, etc. It falls within their responsibility to study the influence that their admired figure left in the writings of other authors too. Once the book is published there is always the gripping fear that one has left an important connection unveiled. Given the breadth of scope and the attention to detail put intoWilde en España, it seems safe to say that Sergio Constán has succeeded in his ambitious enterprise. His aim in the present book has been to explore Oscar Wilde’s presence in Spanish literature in the more than 50 years that span the period when he was first mentioned by an author writing in Spanish, until the beginning of the Spanish Civil War in 1936, which deeply altered the cultural landscape of the country. The difficulty of Constán’s research must have been doubled by the distance that separates us from those early years when the influence of Wilde was beginning to take shape.

Wilde’s flamboyant attitude and attire were first noticed not by a Spaniard, but by a Cuban, and not just any poet, but José Martí, one of the fathers of Cuban independence and national hero. Martí wrote a newspaper article about Wilde in January 1882, after attending one of his talks in New York. This is the first of the highly interesting details about Wilde and Hispanic culture that is revealed in the four chapters of the book. The initial section reviews Wilde’s reception in Spain, with frequent references to South American authors, and the fact that Wilde was mentioned by Martí when the young Irish aesthete had published hardly anything is an indication of the curiosity that he provoked in those who were in contact with him, however indirectly, and there could hardly be two more disparate personalities than Martí and Wilde.

Some Spanish writers actually made the acquaintance of the Irishman in their visits to Paris in the early 1890s. Wilde sometimes stayed for long periods in the French capital, and there the arch-bohemian Alejandro Sawa met him, a contact which greatly enhanced the credentials of modernity for the Sevillian writer among his peers on his return to Spain. Other writers who met Wilde were Antonio and Manuel Machado, Pío Baroja and Benito Pérez Galdós, but these were mostly punctual encounters. Wilde, however, was very much in the critical writings of other intellectuals of the day, like Leopoldo Alas “Clarín”, or Emilia Pardo Bazán. Decadentism was viewed with suspicion in Spain in the final decade of the 19th century, and Wilde’s tendency to produce extravagant views was normally criticized, although there was little doubt about his enormous talent.

Nicaraguan poet Rubén Darío, an exponent of Hispanic Modernism, was one of the first writers who defended Wilde against his critics. It was common to assign a perverted, insane mentality to decadent authors, and for many these opinions were confirmed when Wilde fell into disgrace. It was Darío who first wrote an obituary about Wilde in the Spanish language, unashamedly defending his work when almost everyone repudiated him.

In Wilde en España Constán presents the evidence of long lost editions of books, forgotten literary journals and innumerable prologues of his works in which Wilde is mentioned and discussed. Only on a few occasions does he venture to imagine what perhaps happened in a particular situation, as in Wilde’s funeral with the possible presence of some Spanish writers (p. 61). The overall tone of the study is of a consistent academic preciseness. His research becomes especially relevant for literary scholarship in his account of Wilde’s writings translated into Spanish, the first being, not surprisingly, Salomé, in 1902. The scandal that surrounded the author was still an ominous presence in the decade after his death, but this did not prevent the efforts of some intellectuals in the promotion of his work.

Ricardo Baeza must occupy a predominant place among the enthusiastic admirers of Wilde in his capacity as a translator, critic, editor and theatrical entrepreneur. In the first decades of the 20th century, he would translate all of Wilde’s works and his name became permanently associated with the Irish author. As it happened in many other countries, Wilde’s talent attracted the attention of the champions of heterodoxy in each national culture, and that role was fully played in Spain by Ramón Gómez de la Serna, who paid Wilde constant attention in his writings (Ramón’s brother, Julio, was another early translator of his work).

The second chapter tackles the influence of Wilde on Spanish prose writers. Indeed, many important essayists wrote about him: Rafael Cansinos Assens, Ramiro de Maeztu, Ramón Pérez de Ayala or Eugenio d’Ors, among others. Cansinos Assens was one of the many who used the term “wildiano” despectively about other writers with homosexual tendencies. But Wilde’s influence was unstoppable, and Constán convincingly defends the presence of Wilde’s The Picture of Dorian Gray in Miguel de Unamuno’s Abel Sánchez (1917) and in Azorín’s Doña Inés (1925). The third chapter focuses on the connections between Wilde’s plays and the Spanish theatre of the day. Quite surprisingly, the weight of the Irish dramatist’s work on Nobel-Prize winner Jacinto Benavente is not as heavy as has been normally considered. There was no real influence of Wilde on Benavente, Constán claims, despite the personal and literary affinities between both authors. It is more a question of sharing similar stylistic strategies and of belonging to the same cultural environment. The imprint of Wilde’s plays on the other important playwright of the period, Enrique Jardiel Poncela, however, was outstanding.

The book is complemented with a short final chapter on Wilde and the Spanish poets. Although Wilde does not appear among the literary mentors of Juan Ramón Jiménez, one of the greatest Spanish poets of the 20th century, the Andalusian poet did know the Irish writer’s work well, and mentioned him to his students at San Juan University, Puerto Rico, where he taught in the early 1950s. The valuable and complete reference list, at the end ofWilde en España, is an appropriate conclusion for an excellent piece of research.