by Emilie Pine. This text may be archived and redistributed both in electronic form and in hard copy, provided that the author and journal are properly cited and no fee is charged for access. 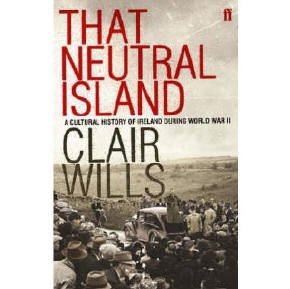 To read Clair Wills’s cultural history of Ireland during the Second World War, That Neutral Island, is a rare pleasure.  With a depth of research and understanding and a lightness of touch, Wills creates a multi-layered picture of the realities of living in a neutral country that was «both in and not in the war».

What is clear from the outset is that neutrality is not a simple term with a single meaning.  Though the decision to keep Ireland neutral was primarily a pragmatic one, the interpretation of, and attitude towards, neutrality shifted over the course of the war, both within Ireland and outside it. At the opening of the war, both Britain and the United States were sympathetic to the Irish decision to pledge neutrality, considering the weakness of the Irish army and the general sense, in the media at least, that Ireland was «backing Britain to the best of her ability».

Yet as the war progressed and the Irish ports became vital to the war at sea, British attitudes changed until, at the end of the war, Churchill implicitly cast Ireland in a collaborationist role.  The same pattern is traced by Wills in terms of US attitudes. At first, of course, the US itself was also out of the war but as it too entered the war, post Pearl Harbour, enormous pressure came to bear on the Irish government to give up its neutrality. Yet, while there were plenty of demurring voices, what did not shift over the course of six years was the support of Irish neutrality by the majority of Irish adults, reflected in De Valera’s huge electoral win in 1944.

Neutrality certainly did not mean that Ireland was immune to the effects of war.  As Wills points out, there were many Irish volunteers in the British army, in addition to the thousands of Irish workers in British factories and cities. Indeed, though the figures are difficult to interpret, Wills estimates that one sixth of the Irish workforce was employed in Britain during the war.  At home, though the emphasis on self-sufficiency in the 1930s had in some ways prepared the country for the depleted circumstances it found itself in from 1940 on, the severe shortages of food, coal, batteries, rubber and, perhaps most importantly, of tea, meant that in many ways Ireland was suffering the same, if not worse, material deprivations as Britain.  While many contemporary visitors’ accounts conjure up the banquets and blazing lights of Dublin, Wills tempers these with accounts of the poverty and hardship of the majority, revealing the nineteenth-century standards of living that many Irish were reduced to.  Though the government might counsel frugality and Ireland’s Own publish imaginative recipes for countering the shortages of flour with Indian meal (associated, of course, with the Famine), there was no way round the fact that many people in rural areas were close to starvation.

The balance of Wills’s account is due to the inclusive nature of her source material, from official reports and archives to local and national media; many of the illustrations are adverts or cartoons from Irish and British papers, lending each chapter a real sense of the texture of the time.  In addition, Wills accesses the subjective side of history with not only personal letters and diaries, but also by including the creative writing and art of the period.  Through drama, poetry and fiction Wills attempts to «give word to the silent majority».  This strategy pays off not merely in terms of referencing well-known works such as Elizabeth Bowen’s The Heat of the Day, but also by giving these works a new and broader context, and this comes through particularly strongly in her readings of Patrick Kavanagh’s epic poem ‘The Great Hunger’ and Máirtín Ó Cadhain’s novel Cré na Cille as works expressing a country deeply inflected by war and entrenched in neutrality.

It is through the wide-ranging consideration of the role of imaginative literature that Wills brings into focus the debate over Ireland’s intellectual stasis – or paralysis – during the war.  For here lies a crucial paradox; while on the one hand, Ireland was cut off from the rest of Europe and writers suffered under the tyranny of war-time censorship, at the same time there was a vibrant internal dialogue about literature and art going on in the country, not least because of the influx of writers and artists from Ireland and elsewhere, fleeing the war.  This intellectual and artistic debate was also far from monolithic, varying from the liberal, Euro-centric The Bell edited by Sean O’Faolain to the Catholic philosophy of The Capuchin Annual discussion group which, as Wills tells us, met in the Ritz Café.  It is this level of detail that makes this book exceptional and gives the reader both an engaging and a learned view of the period.  Wills is also determined to be as true to the specifics as possible, from pointing out anomalies in contemporary accounts, to giving the reader an insight into the range of interpretations of different versions.  In this, Wills exposes the process of history making itself.

Perhaps the most notorious image of Ireland’s neutrality is of De Valera visiting the German embassy to deliver his condolences on the death of Hitler.  As Wills states «Allied attempts to discredit de Valera paled in comparison to this.»  Yet this is far from being the central image of the book; instead readers are given a nuanced reading of a period in which the meanings of neutrality veered from nobility to insularity and, overall, were based on practicality.  This is a brilliant and erudite study, yet also a human one, as Wills weaves a complex history of the «edgy experience» of Ireland during the ‘Emergency’.