by Kate Antosik-Parsons. This text may be archived and redistributed both in electronic form and in hard copy, provided that the author and journal are properly cited and no fee is charged for access. 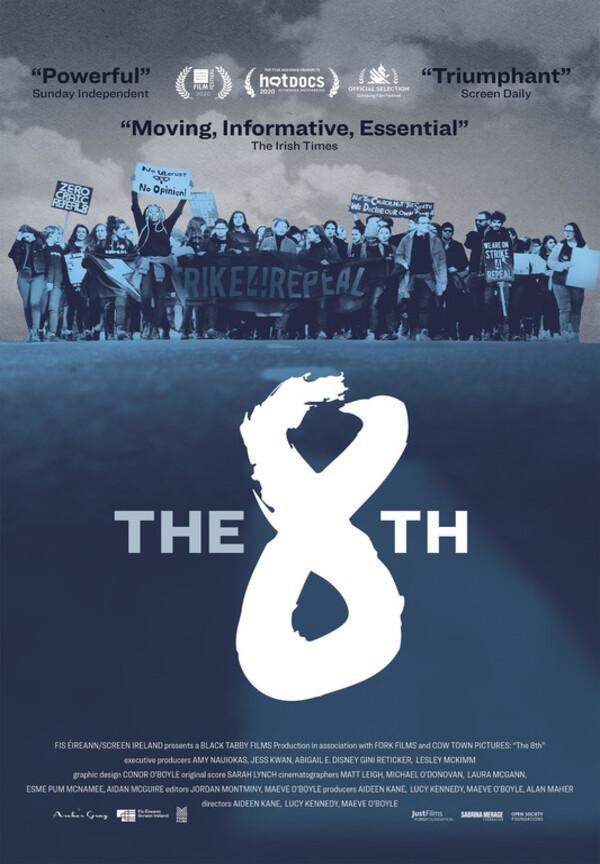 In 2018, Ireland voted by national referendum to overturn the pro-life 8th Amendment (1983) to the Irish Constitution which prohibited abortion in nearly all circumstances. The 35-year struggle for bodily autonomy was punctuated by key moments that marked the shift attitudes that eventually led to the referendum to repeal the 8th Amendment and the subsequent legalisation of abortion in Ireland. The documentary film, The 8th (1hr 35min), directed by Aideen Kane, Lucy Kennedy and Maeve O’Boyle, aims to tell the story of the repeal of the 8th Amendment. It weaves a complex and vibrant tapestry of contributions from pro-choice campaigners supporting the repeal of the 8th Amendment, pro-life campaigners who wished to retain the 8th Amendment, interspersed with commentary from public figures, academics and medics and complimented by with archival footage and materials.

From the start, the viewer is immediately drawn into the tension of the issue of abortion. With the opening scenes of the film an airplane lands and we see a parked bus emblazoned with “Rosa Bus4Repeal” and “Safe Abortions With Pills”. Anti-abortion campaigners from the Centre for Bio-Ethical Reform put large posters bearing controversial imagery at the Dublin Bus stop outside Belfield. The camera focuses intently on the passengers of a bus, one of whom wears a black sweatshirt with a white 8th crossed out. A text sets the stage for the film by explaining that in 1983 the people of Ireland voted to insert the 8th Amendment into Irish constitution. Next at a crowded junction on Dublin’s O’Connell Street, people argue back and forth. The cries of “murderers, murderers” are pitched against a woman’s voice over a loudspeaker calling out “women must decide their fate.” Several people offer their opinions to camera with one woman pointedly refuting abortion is “not a motherly thing to do, the natural motherly instinct is to save lives”. Within the opening sequence there are references to travelling to obtain an abortion, the historical nature of the 8th, the referendum to repeal the 8th and, importantly, the entrenched views of those both for and against abortion.

The narrative arc of the film centres on the Together For Yes (TFY) referendum campaign which occurred between March – May 2018. TFY was the civil society campaign comprised of member organisations such as the Coalition to Repeal the 8th, the Abortion Rights Campaign, and the National Women’s Council of Ireland. The film picks out two individuals as focal points, activists Ailbhe Smyth, chair of the Coalition to Repeal the 8th and one of the co-directors of TFY and Andrea Horan, the owner of the popular Dublin nail bar Tropical Popical and co-host (with journalist Una Mullaly) of the “Don’t Stop Repealing” podcast. On a quiet Dublin morning we are introduced to Smyth, in her home talking on the phone about campaigning. To camera, she speaks candidly about her own daughter and granddaughter as part of her motivation to remove the 8th Amendment and her own bodily experiences with anorexia nervosa earlier on in life and the subsequent awakening of her feminist consciousness. Smyth is featured throughout much of the film whether it be encouraging people participating in the Abortion Rights Campaign’s March for Choice (September 2017), addressing a large gathering at the International Women’s Day March (March 2018), offering sound bites to media at launch of the TFY campaign and knee-deep in strategising as the viewer is privy to intriguing glimpses inside the TFY headquarters.

Breaking a sweat at the gym, we meet Horan, who contemplates that she doesn’t really know what her feminism is but identifies that pro-choice politics filled with anger weren’t particularly appealing. Horan seeks to challenge ideas about what constitutes a feminist and argues narrow definitions of feminism serve to alienate those who support bodily autonomy especially if they don’t see themselves reflected in traditional pro-choice politics. Horan identifies a cohort of young women disenfranchised with the current Irish political system and discusses how this sparked the idea for her that repeal needed to speak more broadly to a cross-section of contemporary Irish society. Horan’s PR savvy and marketing expertise enabled her to specifically appeal to would-be voters with her website Hun Real Issues. Throughout the film, Horan is depicted engaging in a variety of campaign activities including canvassing, her podcast, and poignant conversations with co-workers on the issue of abortion. Smyth and Horan act as a foil for one another and the decision to spotlight these fascinating individuals is surely to give a sense of the range of people involved with pro-choice activism from the more experienced to the newer, emerging activist. Although it gives a certain structure to the film, it may also inadvertently have led to the perception that the overarching movement to repeal the 8th was not particularly diverse. In actuality, the movement included a broad spectrum of activists such as migrant women, Traveller women, trans people, people with disabilities, and people seeking asylum living in direct provision centres, amongst others, and importantly without whom, repeal could not have been achieved – these voices, however, are not prominently featured.

The 8th also includes commentary from high-profile pro-life supporters like Cora Sherlock, chairperson for the Pro-Life campaign, John McGuirk, the communications director of the Save the 8th campaign and Wendy Grace, a broadcaster for Dublin’s Christian Spirit Radio. Grace features in the film talking about feminism and equality and considers how she came to adopt a pro-life stance. In her workplace, Grace rapidly scans multiple newspaper articles and heads into studio on air highlighting for listeners key ideas in the development of the referendum. The inclusion of people like McGuirk and Grace, and footage from a Rally for Life of Katie Ascough, impeached President of the UCD Student Union, underscores that the sometimes sketched out division of old vs young in abortion rights politics is a false one. However, as the film progress it becomes clear that this is the story of the pro-choice victory.

A major feature of the campaign was canvassing, as people across the country sought to engage the sway the undecided voter. The 8th portrays campaigners engaged in thoughtful conversations on doorsteps and in town squares, and highlights some of the difficulties and complexities that voters grappled with, specifically in reference to the proposed 12-week cut-off point in legislation should the referendum be passed. Key arguments are extracted from broadcast television debates such as those on RTÉ’s Late Late Show and Claire Byrne Live. The TFY team are filmed watching a television debate, totally engrossed, communicating the feeling that this could be a tipping point. It is at this stage that the film turns to the harm caused by the 8th Amendment, reflected in newspaper headlines such as those relating to Michelle Harte, a woman who was undergoing cancer treatment and was denied an abortion in Ireland. Focusing on the death of Savita Halappanavar, a 31-year-old Indian woman who died of sepsis in University Galway Hospital after she was denied an abortion while miscarrying her pregnancy at 17 weeks, the film includes a contribution from her husband Praveen and the candle-lit vigils held for Savita when the public learned of this horrendous tragedy. This was a particularly important moment of public outrage that galvanised emerging activists in 2012, which, like the X-Case (1992) mentioned at a different stage in the film, renewed the efforts of pro-choice movement in Ireland to remove the harmful amendment.

The film touches on the strategy to focus on the “hard cases”, those with wanted pregnancies who terminate for reasons of Fatal or Severe Foetal Anomaly, as a way of winning over the undecided voters. Sinead Kennedy of the Coalition to Repeal the 8th and TFY executive, and John McGuirk both contribute to understandings of how this issue became understood as central to winning over the undecided voters. Of particular interest is McGuirk who openly muses that if the referendum was solely about the hard cases the 8th Amendment would be repealed by an overwhelming majority. It is striking however, that there is no inclusion of the voices of the parents of Termination for Medical Reasons (TFMR), the support group and campaigning organisation of parents who have direct lived experience of this issue. The directors have missed an opportunity to include insight from TFMR who publicly and repeatedly told their harrowing stories over a number of years in the lead up to and during the the referendum campaign to draw awareness to the unanticipated impact of the 8th Amendment on wanted pregnancies.

The film captures different cultural moments that intersected with the repeal the 8th campaign such as the unveiling of Maser’s Repeal the 8th mural on the side of the Project Art Centre and its subsequent censorship. Collectivity and solidarity in the film is manifested in the gathering of people opposing the removal of the mural shouting “you can take down the mural but you can’t take down the movement” and in the collective body of large groups of people of all ages filling the streets holding banners in support of their cause. One of the most powerful moments in the film is use of the cacophony of women’s voices speaking out about their experiences under the 8th Amendment. This is presented in the build-up of the frenzied activity in the final days before voting day on the 25th of May and this mirrors the outpouring of stories from people whose lives had been negatively impacted by the prohibition of abortion in Ireland.

The film’s aesthetic of moving between present day and past, where it considers key historical moments in the 35-year struggle for abortion rights through archival materials such newspaper headlines and connected by animated transitions, conveys the sense of “living histories”, enabling such histories to be read as part of a continuum rather than discrete events that remain in the past. An example of this is when Smyth reflects on her age and the legacy of the 8th Amendment, the viewer is taken back in time through the use of illustrations dissolving to archival materials, like newspaper headlines on microfiche, black and white photographs of protestors and then television footage from 1983.

Time in this film moves across different temporalities, though the date is often signposted for the viewer. This traversing of time can be a little confusing, particularly with regards to the commentary of those of TFY executive who appear to be speaking post-referendum, while the pro-life campaigners are speaking of the referendum campaign as it happened. This also raises a point specifically related to some of the commentary from TFY organisers, in that the film gives TFY the opportunity to address criticisms of their campaign without really explaining who those criticisms were from or what they consisted of. Recent publications like the Feminist Review: Abortion in Ireland (2020), After Repeal: Rethinking Abortion Politics (Zed Books 2020) and Feminist Encounters Special Issue on Repealing the 8th: Irish Reproductive Activism (2022) have sought to flesh out the nuances of the multiplicity of efforts that contributed to repeal. As such there are some important exclusions of the range of activists that worked for repeal and the varying strategies to ensure they brought repeal over the line, though undoubtedly the filmmakers faced a mammoth task in condensing down the complexities of the history of the 8th Amendment and covering the breadth of the campaign. The 8th paints with broad brushstrokes the compelling story of the repeal of the 8th Amendment and the central role of the TFY campaign. It offers a good starting point for those who want to learn about the 8th Amendment and to grasp the enormity of this historic victory for the people of Ireland at a time when hard-won reproductive rights world-wide face constant threat.