The Atlas of the Great Irish Famine

The Atlas of the Great Irish Famine 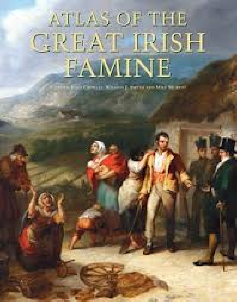 The Atlas of the Great Irish Famine does not claim to speak for the one million men, women, and children who starved or succumbed to related diseases in Ireland between 1845 and 1852. It begins with Eavan Boland’s poem, “That the Silence of Cartography is Limited”. This seems to represent an acknowledgement of the near-futility of attempting to represent the reality of the Famine, of hunger, pain, fear, and death experienced in cabins and huts, in bogs and ditches, in workhouses and fever hospitals, and by roadsides. Many of the victims remain anonymous, hidden from history by mass graves. Yet this sophisticated volume does as much as any history can and deserves the highest praise. It is a worthy treatment of its monumental subject, and offers a tour de force synthesis of interdisciplinary scholarship from the fields of art, geography, literature, and indeed cartography, as well as from diaspora, Irish, memory, and migration studies. No fewer than fifty essays from sixty contributors provide a vast body of local, provincial, national and international analysis on pre-famine society, contemporary relief efforts, and the legacy of the haemorrhaging of the Irish people through emigration. This latter phenomenon has been central to Irish self-understanding and to how others have perceived the island. At least those who survived, whether they went or stayed, could tell their tales, as long as guilt or trauma did not prevent them. The book is beautifully produced and visually striking. Computer-generated parish maps of population decline blend seamlessly with contemporary paintings and illustrations, as well as with more recent photographs.

Irish population expansion from the mid-eighteenth to the mid-nineteenth-century, in the face of agricultural depression and the de-industrialisation of the island outside of the north-east, was overwhelmingly reliant on the cultivation of potatoes on increasingly marginal land. The destruction of successive crops by blight meant that the food supply was abruptly and drastically reduced. Famines, however, can result from an inability to access available food as opposed to an outright scarcity of all types of food. The Great Famine was distinguished by its longevity and the associated scale of its mass excess mortality, but also by the location of its occurrence. Appallingly, this was at a time when Britain boasted the leading empire in the world, and the United Kingdom of Britain and Ireland was the richest and most powerful state yet known. There is no fudging. Dogmatic administrators and economically-motivated evicting landlords are not absolved of responsibility, but as in all good history, misperceptions are challenged where they may exist. Death did not discriminate on the basis of religion. Often, Irish Catholic professionals and tenant farmers benefitted at the expense of those less fortunate. The catastrophe was exacerbated by the undaunted adherence to laissez-faire economics of the British political elite. Doctrinaires even withheld food supplies from Ireland at critical junctures. The intellectual position of Charles Edward Trevelyan, the Treasury official leading the state’s response, was that humanity should be left to the mercy of the free market. According to his thinking, government intervention was not warranted or desirable. His cohort anticipated a highway to modernity through the famine roads. Their inhuman policies of wilful neglect failed the Irish people. The result was the worst humanitarian catastrophe in nineteenth-century Europe and perhaps the defining development in national history. Its impact was not confined to Ireland and its shadow looms large, home and away. Within a decade, two million people had fled to destinations around the globe in pursuit of something that was not available to them in Ireland, whether that was simply enough to eat, or something more abstract, like happiness.

The mapping of the Famine at parish level allows for new interpretations of traditional perspectives and folk-memory. The identification of intricate and interlinked local and regional dynamics raises questions about the social conditions which prevailed around the country and the diverse responses in terms of relief efforts. In tandem with the provincial case studies, they demonstrate clearly the variety of causes and effects at play. Also traced are the routes followed by those who had to undertake a journey of the heart and mind as part of their physical travel, to learn a new tongue and forge a new identity in an attempt to make a new home. It is the stories of the fates of individuals and their communities that are the most affecting, and which for many readers will be the most interesting.

Of particular appeal to me was John O’Connell’s short piece on Donoughmore, Co. Cork, the home place of my father. Reliant in some parts on “spent bog in a state of tillage”, as many as 1,400 people died in Donoughmore between November 1846 and September 1847. Valuation Office records suggest the suffering of the entire population of the townlands of Bunkilla and Monavanshire, twenty families all told, who had been evicted by 1851. One of the landlords was John O’Callaghan, with whom my father and I share a name but, I feel compelled to add 160 years after the fact, to whom we are not related. By the 1860s one of the Bunakilla families had made their way to Minnesota, where they purchased Winnebago Indian Reservation land from which the native people had themselves been removed.

In contrast to the Great Irish Famine, most modern famines occur in marginal economies. The concluding section of the Atlas devotes weighty consideration to the historical resonances between the Irish and contemporary famines. The most pressing question it raises is not a new one, but it is one of only a few to which it can provide a definitive answer: why are famines still happening? This is the authoritative reference work on the Famine. It will serve Irish people and all others well, wherever they may be. It will be a powerful teaching resource and will no doubt inspire future research.