The Bell Magazine and the Representation of Irish Identity: Opening Windows by Kelly Mathews

The Bell Magazine and the Representation of Irish Identity: Opening Windows by Kelly Mathews

by Malcolm W. Ballin. This text may be archived and redistributed both in electronic form and in hard copy, provided that the author and journal are properly cited and no fee is charged for access. 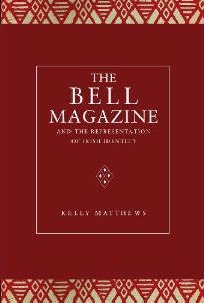 It was part of The Bell’s implicit assumptions that the Ireland its readers lived in had not been described and that too much of Irish life had been seen through the haze of nostalgia for an invented past or idealism about a projected future (2012: ix).

A little later, in her own Introduction, Matthews suggests that

The Bell proposed for Ireland a multi-faceted identity, a multiplicity of voices that had been interwoven throughout history and carried into the present day. As such, the magazine represents a break with the narrow forms of nationalist discourse which predominated in the 1930s … (2012: 26).

Matthews identifies a creative tension between “representation’” The Bell’s original documentary objective − to describe and analyse the conditions of Irish life during the post-revolutionary era under de Valera’s government − and “transformation”, the creative act of influencing the future of Irish society and culture along more liberal lines.

The Introduction outlines The Bell’s distinctive  character, including its focus on literary realism, efforts to establish an active dialogue with its readers, its relations with contemporary journals (such as Studies and Christus Rex) and with predecessors (including The Irish Statesman  and  Ireland To-Day). Matthews defines The Bell’s “inclusive” approach, avoiding an over-emphasis on Dublin’s role but also resisting the eternal verities of rural Ireland invoked in de Valera’s iconic St. Patrick’s Day broadcast. The Bell’s global perspective, registered through “International Numbers” and O’Faoláin’s “One World” editorials, established “a post-colonial context “(23). Post-colonial theorists such as Fanon and Bhabha are cited as relevant to The Bell’s twin missions while work by Luke Gibbons on culture as a transformative force supports her contention that “The Bellconsciously tried to create a more complex and inclusive version of Irish identity” (25).

Matthews ends the introduction by reviewing earlier critical work on The Bell (28-34). She suggests that some commentators, over-influenced by “O’Faoláin’s powerful personality” have underrated the contributions of others, such as Frank O’Connor and Geoffrey Taylor, and that they have given “comparatively little attention” to the eight years of O’Donnell’s editorship.  She accepts, however, that O’Donnell was not highly effective, and in practice, something of an absentee editor.

The next chapter, about the perceived tensions between “representation” and “transformation”, gives close attention to O’Connor’s series, “The Belfry”, describing his reluctant acquiescence in O’Faolain’s project of encouraging new poets to submit work. His “bluntly critical commentary” on submissions by Hewitt and Greacen discouraged neo-romanticism and underlined his preference for “the reality of everyday life” (48). This approach, together with O’Faolain‘s “New Writers” series (focused on short fiction) and Michael Farrell’s articles on “The Country Theatre”, “aimed to transform the arts in Ireland”’ (51). Placement of articles in the magazine was carefully structured “to provoke the reader to reflect on the multifariousness of life in contemporary Ireland” (58). Special issues, such as the “Ulster” and “International” numbers developed The Bell’semphasis on “the more direct forms of commentary on Irish literature, politics and culture” (64).

These themes are developed in detail in Chapter 3 (“The Evolution of The Bell”) and, most significantly, in Chapter 4: “Representations of Irish Identity in The Bell” − which lies at the core of the book. Attention is paid to circulation levels within Ireland, Britain and America (69), and to the review section’s project of “national education” in literary matters (85). A discussion of O’Donnell’s “under-debated” editorship confirms some falling-off of quality and a shift towards more literary material (93). Matthews emphasises The Bell’s material on slum-dwelling and town planning, the constructive debate about the Gaelic question and the sympathetic discussion of the problems of Northern Ireland.

Matthews turns in Chapter 5 to discussion of “The Belland transformations of Irish identity”. She initially gives priority to wartime neutrality and the accompanying censorship, drawing on the work of Clair Wills. O’Faoláin’s view that “Irish moral judgement and intellectual engagement had been ‘starved’ by the censorship” was reinforced in his ten outward-looking editorials on the “One World” theme (144-45). Matthews goes on to praise the modernising debate in the magazine about radio, press and cinema (158). Considerable space (166-70) is given to James Plunkett’s realist fiction concentrating on Irish urban experience, and associated “isolation and frustration”. The book is rounded off by a brief Conclusion (171-78) – “The legacy of The Bell” −looking “unflinchingly on the realities of contemporary Irish life”, offering “a forum for both the representation of new realities as well as considerations of how they would impact Irish identity.”  It is “a story of editorial doggedness and perseverance”, aiming at what Luke Gibbons describes (173) as “transformation from within.” Its successors, magazines like Envoy, Threshold or Rann were short-lived. Longer term inheritors of The Bell’s tradition are Atlantis and the Field Day movement − both seeking to unite a divided society and see Ireland in an international context.

Kelly Mathews has produced what is likely to be the fullest and most authoritative text on The Bell for some time to come. I have very few cavils. It seems a pity that she does not acknowledge contemporaries such as David Marcus’s Irish Writing (1946-57) − which also published seminal work by James Plunkett and Sean O’Faoláin. The Bell inherited a tradition of Irish miscellanies, such as Standish O’Grady’s All Ireland Review, which invoke a carnivalesque opposition to established opinion. Even today, Chris Agee invokesThe Bell as a model for his Belfast-based Irish Pages.  The structured opposition Matthews proposes between “representation” and “transformation” is somewhat complicated by The Bell’s practice of advocating change (or “transformation”) precisely through its realist representation of the nature of existing Irish society. In my view, The Bell helped to prepare the way for eventual public acceptance of the radical reforms associated with T.K. Whitaker and Sean Lemass, leading up to Ireland’s entry into the European Community.