by Maria Pramaggiore. This text may be archived and redistributed both in electronic form and in hard copy, provided that the author and journal are properly cited and no fee is charged for access. 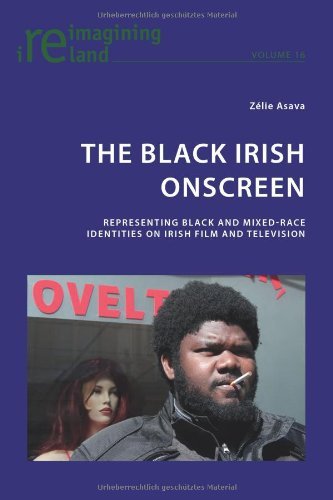 In this ambitiously conceived book on the intersectionality of black Irish identities, Zélie Asava trains her gaze on the intercultural, the outsider, the migrant, and the diasporic subject, as envisioned within contemporary Irish film and television from the Celtic Tiger into the twenty first century. Asking “how is the relationship between white and black Irish expressed in Irish visual culture?” (2), Asava focuses variously on mixed-race characters, interracial couples, black men in film and “mixed” women on television. The films and television programs examined range from familiar international releases  ̶  Neil Jordan’s The Crying Game (1992) and John Michael McDonagh’s The Guard (2011), for example  ̶  to homegrown horror films [Isolation (Billy O’Brien, 2005) and Boy Eats Girl (Stephen Bradley, 2005)], to popular television series (Fair City), to short films Moore Street Masala (David O’Sullivan, 2009), Cactus (Alessandro Molatore 2007), and Milo (Berend and Roel Boormsa, 2012)].

What unites these texts, in Asava’s view, are common threads such as “a new focus on the individual and their [sic] relationship to society,” emanating from “the excesses of capitalism which led to the label Celtic Tiger Ireland” (5). Moreover, in contemporary Irish visual culture, “the personal is political and a European aesthetic is often privileged over the Americanized style of cinema popularized by Neil Jordan and Jim Sheridan” (6). Despite this statement, Neil Jordan’s continuing influence can be inferred from Asava’s frequent mention of his films throughout the chapters. Summing up the book’s position, the author explains: “Irish screen culture remains quite monolithic and rarely positions the black Irish as part of the collective ‘we’ of the nation” (21).

The exploration of contemporary films and television programs is shaped by Asava’s chosen emphasis on “black/white heterosexual mixed race” (11) characters, a choice based not on a desire to replicate binaries but one necessitated by “the material available and identity politics”  (12). This assertion calls for a further elaboration of identity politics as they evolved within Celtic Tiger Ireland in the 1990s and 2000s. The accompanying definition of this concept, which emerged from the 1970s in the US, does not go far enough to historically and theoretically ground the book’s analysis of black identities in contemporary Irish popular culture. A discussion of the particular ways in which gender, racial and sexual diversities began to be articulated in political discourses in Ireland during the period in question would be welcome.

With a stated interest in representations of the “new Irish” of the Celtic Tiger era, the author promises a Critical Race/Ethnicity Studies approach to “how screen images correspond with real life histories and how this affects concepts of Irish identity, history and nation” (2).  The central position of this sociological perspective, pairing reality with representation, explains the author’s frequent movement between fictional texts and social history.

In this regard, one strength of the book is its interest in the relationships among texts, performers, and social practice. Discussions of the social and semiotic significance of actor and performers such as Samantha Mumba and Ruth Negga are scattered across several chapters. If pursued in a more deliberate fashion, the topic might have yielded a fruitful analysis of the intersection of star persona and raced identities in the contemporary Irish context. The actors’ performances and their cultural resonances  ̶ which will also inevitably be related to gender, sexuality and race  ̶  are shaped by the industry and fan cultures that brand and individuate them, as Richard Dyer’s pioneering work (alluded to in the book) addresses. Stardom’s emotional cathexis is one important route by which fictional works create a lasting impact on culture. The book’s stated interest in the way popular culture texts both reflect and contribute to material and political culture might be more fully articulated through a firmer theoretical foundation in active spectatorship practices.

In general, a clearer statement of the author’s view on the relationships between texts and social practice would be helpful for clarifying the larger significance of the individual textual readings, which tend to focus on plot and character. This is especially important given the underlying political motivation for the project: the author writes that it is “crucial to explore these relationships, and their representations on screen, as Ireland moves forward to become an intercultural society and strives to avoid the problems of other European states regarding hate crime and social division” (26). Given this instrumental outlook on the role of film and television, it would be helpful to understand the author’s position on the way fictional representations have influenced the economic and cultural shifts of the last two decades in Irish culture and might influence them in future. It is non-controversial to propose that films both reflect and shape cultural attitudes and practices; explicating those mechanisms in specific contexts would have produced a richer analysis.

The book’s sociological basis, its implicit quest for positive images (the author notes, for example, that Jordan has never created a “normative interracial or homosexual love story” (59), and its strict focus on characterization inform its textual analyses, which tend not to differentiate between fiction and documentary modes of representation, or between film and television. For example, might there be different types of engagement with “black Irish” characters in serial television, a mode that generates ongoing discussion in the Irish press and social media, as opposed to individual feature-length or short films, the latter of which might be screened primarily at festivals to a smaller audience? Furthermore, the visual analysis rarely moves beyond the general (e.g., chiaroscuro lighting in thrillers) to account for the way film and television make meaning. The mention of a medium close up in Chapter Four (116), jumps out as an anomaly, yet this type of detailed reading is precisely what is required throughout the book in the analysis of visual texts because it provides access to cinema’s visual strategies of enunciation, which carry its political implications.

Drawing upon the work of Irish film scholars and cultural historians, including Luke Gibbons and Diane Negra, and critical theorists such as Julia Kristeva and Dominique Quessada, Asava asserts the importance of whiteness to contemporary Irish screen representation. The author addresses Ireland’s implication in whiteness, frequently with reference to slavery and African American culture, but stops short of fully developing these linkages in the context of the Celtic Tiger economy and migration specifically.  Situating whiteness in Ireland calls forth a variety of potentially contradictory contexts  ̶  British colonization and empire, the triangular slave trade, Irish emigration, US neocolonialism, contemporary European migration. A legitimate question to ask is whether the critical axes for defining Irish whiteness, growing from academic writing of the 1980s and 1990s, should be reconsidered in light of the massive immigration, primarily from Europe, that Ireland witnessed during the Celtic Tiger period. If theories and practices related to a globalized African American culture remain important (for example, because they are embraced by characters in these films), do they fully articulate the racial dynamics of contemporary, multicultural Ireland?

Fairly late in the book’s introduction the author mentions the traditional understanding of the term “black Irish” as the descendants of the survivors of the wreck of the Spanish Armada in 1588 (23). In an attempt to privilege “the new Irish”. the author misses an opportunity to historicize contemporary ideologies and practices. A concept of black Irishness existed prior to the twentieth century, prior to the inaugural event that the author points to as a frame for the historical situation of the black Irish  ̶  the first deportation of a black man in an independent Ireland in 1925 (18). Additionally, the allusions to Esclave maître  ̶  a concept originating with Hegel’s master-slave dialectic (which remains unmentioned) that has been rearticulated as a simultaneous construct rather than a sequential dialectic within Dominique Quessada’s theory of ontological non-separateness in an autophagic consumer culture   ̶  are potentially intriguing, but the concept itself, adapted to the Irish context by Michael Cronin, is far too briefly treated. The stated goal of interrogating and disturbing monolithic notions of Irish identity with assertions of its longstanding diversity might be furthered by examining the historical record and engaging in a fuller explication of fewer theoretical terms.

The book is at its most compelling when discussing moments of contemporary popular culture that confront Irish diversity of various kinds  ̶  in the visibility of actors such as Ruth Negga, rappers such as Rejjie Snow, the first black Irish mayor, Rotimi Adebari of Portlaoise, and in the rise of film festivals tied to a national heritage  ̶  as emblems of the social shifts of twenty first century Ireland. It is as its weakest when visual culture texts are mapped onto reality in a straightforward way and it suffers from numerous typos and grammatical errors (two egregious examples are the misnaming of Ella Shohat as Ezra and the confusion of inference and implication).

Asava’s book, though flawed, represents an important first step in examining diversity in popular culture in post-Celtic Tiger Ireland. Perhaps unwittingly, she reveals a film culture that remains in thrall to the imperatives and racial dynamics of a global market. Asava writes that she chose the texts in the book in part because they possess “an innovative approach to racial representations which challenges dominant Western cinematic tropes” (5) whereas her analyses reveal that, with the exception of the “Masala style filmmaking” of Moore Street Masala, Blaxorcist (Edward King, 2007), New Boy (Steph Green, 2007), and of Cactus and Milo, this is actually not the case. Instead, the Irish moving image culture she documents in relation to depictions of blackness,seems to be entrenched in the politics of exclusion and exoticism.