by Vanessa Silva Fernández. This text may be archived and redistributed both in electronic form and in hard copy, provided that the author and journal are properly cited and no fee is charged for access. 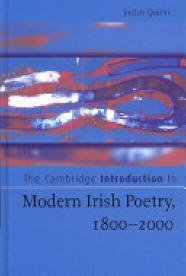 Ever since its launch in 2002, the series of Cambridge Introductions to Literature has released over 50 titles on a wide range of literary topics. One of the last additions to the series has been a volume dedicated to modern Irish poetry, written by Justin Quinn, an Irish critic and poet himself. Given the aim of the series, which is primarily to provide a work of reference for students, we should not expect beforehand to find in-depth essays on the topic. Nevertheless, Quinn succeeds in providing a refreshing overview of the authors and themes of modern Irish poetry, by abandoning the usual homage to well-established canonical figures and focusing rather on the contradictions and intersections featuring in this literary moment. Since the work is organized taking into account its prospective readership, every chapter is divided into subsections dealing with specific authors. However, in spite of these clear divisions, the volume reads well as a whole, thanks to an informed and well-chosen series of quotations, an original analysis of representative poems and a preservation of thematic unity throughout.

Curiously enough, the work starts with the question “What is Irish poetry?” (1) and with Quinn’s acknowledgement that he can only provide provisional and contradictory answers to that question. For the purposes of his account, modern Irish poetry will be Anglophone, produced between the Act of Union and 2000, and characterised mainly by a variable attitude towards the concept of nation.

The first chapter, dedicated to ‘The Appearance of Ireland’, can be summarized as a chapter on intersections. Quinn focuses on the adoption of the English language and the loss of Gaelic and on the ambiguous attitude towards the Empire. As the author reminds us, despite their interest in Ireland and all things Irish, the poets of this era were actually writing for a British audience. Quinn gathers together the ambivalent views of Thomas Moore, J.J. Callanan and J.C. Mangan, authors who would excel, as Quinn puts it, “in keeping the pot warm, and never bringing it to the boil” (11). The ambiguity present here goes a step further in the times of ‘Tennyson’s Ireland’ with the creation of apparent contradictions such as the ‘Victorian Gael’ or the Gaelisation of Anglophone poetry. Quinn presents authors, such as Samuel Ferguson or William Allingham, who swung between their connection to the Victorian Empire and their self-identification with the Irish National sentiment.

The following three chapters, ‘Revival’, ‘W.B. Yeats’ and ‘Wild earth’ deal with the Irish Literary Revival. Especially relevant to chapter 3 is the connection between the Revival and Modernism, clearly seen in coinciding concerns such as the revision of tradition, the importance of indigenous culture, the inadequacy of language and the limits of the Victorian poetic mode. Having dealt with the confluence with modernity, Quinn focuses on the confrontation of modernity in the chapter dedicated to Yeats, which emphasizes the role of Irish culture as refuge and describes the new relations between literature and nation. Successively, chapter 5 deals with the generation that followed Yeats chronologically and with the different reactions towards the legacy of the Revival. Always interested in the numerous contrasts and contradictions present in the history of Irish poetry writing, Quinn includes in this section very different responses, such as Patrick Kavanagh’s or Louis McNeice’s. The cluster of chapters then receives a closure in Chapter 6, ‘The ends of Modernism: Kinsella and Irish experiment’, where Quinn discusses the mid-century born experimentalist generation which created a poetic of chaos and conflict and subverted the Irish nationalist ideology.

Subsequent chapters account individually for other great concerns of Irish modern poetry. ‘Ireland’s Empire’ stresses the situation of poets of Protestant background who both feel the need to claim their Irishness and the unease of being identified with the colonizing Empire. This section discusses the work of Belfast-born Derek Mahon and Michael Longley, and Quinn remains focused on the North of Ireland by dedicating chapter 8 exclusively to Seamus Heaney. Quinn pays special attention to Heaney’s moments of crossing, be it between Catholicism and Protestantism, Irish and English language or politics and literature (conflicts which are enacted in the extensively commented poem ‘Act of Union’).

In ‘Irsko po Polsku: poetry and translation’ Quinn deals with the negotiations between Anglophone poetry and the Irish language. He looks at the ways in which Gaelic and the community of Irish speakers have become a theme, and gives voice to the controversy arising from the translations of contemporary poetry written in Irish. Chapter 10 is in turn dedicated to the effects of the relation between ‘Feminism and Irish poetry’  —  especially its impact on the work of male poets and its achievement of a re-evaluation and revalorisation of those women poets who featured prominently in the feminist debate of the 1970s and 1980s, poets such as Eavan Boland, Medbh McGuckian or Eiléan Ní Chuilleanáin. In a following chapter, ‘Out of Ireland: Muldoon and other émigrés’, there is a discussion of the expectations Irish exiles meet out of the Irish borders (specially in America) and how these expectations are subverted. There is also a space in this chapter for hybridity and for the experience of inner émigrés who cross the invisible borders within Ireland.

Finally, chapter 12 witnesses ‘The disappearance of Ireland’ after the profound transformations taking place from the 70s onwards and up to the roar of the Celtic Tiger. Quinn presents the reader with a nation which has reacted to the impact of feminism, a nation where the Irish language has become independent of nationalism and the sense of place is no longer pervasive. The nationalist agenda long forgotten, Quinn’s impression is that the disappearance of the old Ireland of rigid borders should be seen as a liberating experience for the poets. Paralleling this experience, in The Cambridge Introduction to Modern Irish Poetry we can witness the disappearance of the rigid borders of traditional scholarship. The selection of material presents some debatable choices, such as the predominance of twentieth-century authors or the exclusion of Irish poetry written in Gaelic. These choices and absences are nonetheless explained by Quinn’s initial definition of the Irish poem and to be expected in an Introduction which has to deal with such an extensive scope. Quinn’s main achievement will not reside in his ability to cover the ground of Irish poetry from 1800 to 2000, but rather in his enlightening approach to the ground he does cover. There is no doubt that the future scholars for whom this volume is produced will benefit greatly from Quinn’s multiple perspective, which focuses on subversion, intersection, contradiction and boundary-crossings. After all, that is what really lies at the core of modern Irish poetry.