by Nicholas Grene. This text may be archived and redistributed both in electronic form and in hard copy, provided that the author and journal are properly cited and no fee is charged for access. 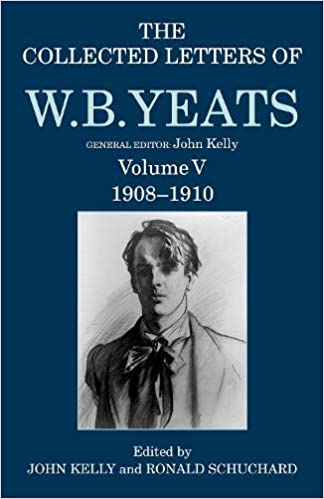 “It is very pleasant here”, Yeats writes to Lady Gregory in March 1910 from Dunsany Castle, where he was staying with Lord Dunsany, then a recently produced Abbey playwright. “I am left alone for my working hours & have written a poem ‘The Fascination of What’s Difficult’”. He did not get much such leisure time to write poems in the three years covered by this volume, largely because of the distractions he lists in this lyric: “Theatre business, management of men”. There were specific reasons why so much of his energy had to be devoted to the Abbey in this period. The Fay brothers, who had largely created the acting company, were edged out in January 1908, and Yeats as Managing Director had to assume many of Willie Fay’s day to day responsibilities of taking rehearsals and directing the performers. With Lady Gregory away in Coole much of the time, and Synge increasingly ill with the cancer which killed him in March 1909, Yeats was often left in sole charge. For a brief time the playwright Norreys Connell was installed as Director, and eventually in 1910 the twenty-three-old Lennox Robinson, with almost no theatrical experience, was given a managerial role. But Yeats remained in the thick of it throughout.

And it certainly was a thicket. There were legal wrangles with the Fays as to what rights they had to perform Abbey plays in the US, and under what title they might perform them. There were constant decisions to be made as to which plays to stage in which venues when they toured in Ireland and Britain, restricted as they were by a number of the part-time actors who could not travel because of their day jobs. Within the company itself, there was always friction and discontent, part professional, part personal. There were rivalries between Arthur Sinclair, leading man after the Fays left, and Fred O’Donovan, the personable young actor taken on in 1908, who was to go on to a career in film and television. There was bitter jockeying for position between Sara Allgood and her younger, more attractive, sister Molly (Maire O’Neill), as O’Neill began to move into some of Allgood’s previous parts. And then there were the love affairs: Allgood feuding with Sinclair (who was in love with her and jealous of her relationship with another actor), O’Neill, courted simultaneously by the manager of the Manchester theatre where the company played and the theatre critic G.H. Mair, whom she subsequently married. It is no wonder that Yeats, in “The Fascination of What’s Difficult” called down his curse “on plays / That have to be set up in fifty ways / On the day’s war with every knave and dolt”, though reading these letters there can be little doubt he had a real taste for those day’s wars.

There is an interesting passage in a letter to Gregory about the possibility of hiring a “young Trinity College man” who had made his mark in student drama. Yeats is very reluctant to take him on, largely for reasons of class. “I have always considered that the class we draw our actors from is an essential part of our success. A young man from Trinity College would be very unlikely to join us, to continue with us. A living wage to Kerrigan would not be a living wage to him”. Many of the company resented the Directors’ speaking of having taken the actors from “workshops and desks”, including J.M. Kerrrigan, a regular member of the ensemble, who had been a journalist before becoming an actor. But with average wages of £1 a week, the actors were earning at an artisan level very different from the income to be expected by Trinity graduates. Yeats distinguishes between the mainstream commercial theatre and the Abbey with its need for a commitment to the enterprise by all involved – actors, playwrights and directors: “There must be corporate fealing” – the spelling is as eccentric as ever. Yet it is evident throughout that the Directors belonged to a management class quite distinct from the performers they managed.

Whatever his class, in terms of actual earnings Yeats was by no means well off. There is a touching passage in a letter of July 1908 to Mabel Dickinson, the physiotherapist with whom he was having an affair: “I am poorer that I ever was in my life. I was plunged in misery the other night by dreaming I had spent 3/6 on strawberry ices – only my collected edition can lift me into opulent air again. Till then I must sigh for that 3/6”. His eight volume Collected Works published by A.S. Bullen’s Shakespeare Head Press in 1908 necessarily features prominently in the letters, notably in the decisions about the portraits to be included and their location. (Besides making use of an existing drawing by his father, J.B. Yeats, and an etching by Augustus John, he was to sit to several artists at this time, including John Singer Sargent and the sculptor Kathleen Bruce). Though the Collected Works did not definitively lift him up into “opulent air”, it was a marker of his literary status as the leading poet in English of the time, famously in his own words “King of the Cats” after the death of Swinburne in 1909. His social stock was rising also; he dined with H.H. Asquith, the Prime Minister in November 1909, as part of manoeuvring by Edmund Gosse to get him a Civil List Pension from the government. This was a sensitive issue for an Irish writer of Yeats’s nationalist convictions, and the £150 a year he was awarded in 1910 was to earn him the contemptuous soubriquet of “Pensioner Yeats” in later hostile press. But it meant a great deal to him at the time, as he acknowledged in a grateful letter of thanks, setting “me free from anxiety and from the need of doing less than the best I can”.

“I long for a life without dates and without any settled abode”, Yeats wrote in September 1910. “If I could find that I could write lyrics again”. Given the degree of his practical commitment to the theatre in this period, and the paucity of poems he was able to write as a result, the feeling is understandable. But location in one settled abode was hardly a problem for him. Nominally, home was Woburn Buildings near Euston, the rooms he rented for many years, and he habitually spent the summer months with Gregory in Coole Park. Yet he was always on the move back and forth between Dublin and London, with side trips to Manchester, Oxford or Cambridge, when the Abbey was playing there, lectures in Liverpool or Harrogate. Public transport of the time made this relatively easy. A new day service introduced in April 1908 meant that Yeats could leave Euston at 1.20 in the afternoon and be in Dublin at 10.15 that night. (Many a contemporary passenger making their way out to wait for hours in Heathrow or caught in traffic coming in from Dublin Airport might wish for as speedy a trip). Communications were equally rapid, with several postal deliveries daily, and the immediacy of the telegram service – though in one notorious case the fate of the Abbey was affected by a telegram boy being delayed by stray cattle blocking the road to Coole Park. The the wire to Lady Gregory asking should the theatre close on the occasion of King Edward VII’s death was thus delayed, the Abbey stayed open, and its English patron Annie Horniman resolved to discontinue her subsidy.

The waspish Horniman was Gregory’s rival as Yeats’s patron. Both were devoted to the poet and his work, supporting him with emotional encouragment and practical help. Horniman gave a subvention to the costs of producing the Collected Works as well as her capital investment in the Abbey and the ongoing subsidy which was to be stopped abruptly in 1910. But in the end, it was no contest. Gregory had so much more to offer: the shared involvement in the Abbey, in which she was not only co-Director but prolific playwright, the comfortable quarters at Coole Park where Yeats did his best work, and their longstanding personal friendship. All of Yeats’s closest relationships were with women. Though he told Dickinson that “Synge’s illness has for the first time in my life made death a reality to me”, he went on to confess “not a little to my wonder (considering how intimate we have been) it was the death of his imagination that has set me sorrowing”. In spite of the affair with Dickinson, it is the relationship with Maud Gonne that remained paramount. The editors of this volume cast doubt on what has been the recent scholarly consensus that Yeats and Gonne did briefly consummate their love in 1908, but there is certainly a new tenderness in her letters to the man she calls “Dearest” for the first time. And she did appreciate the poems he wrote for her in the Green Helmet collection, responding to an advance copy of the book: “There is a danger of my growing very vain when I read these beautiful things created for me – thank you”. The years from 1908 to 1910 were not a happy time for Yeats – when much later he published extracts from a diary kept in 1909 he entitled it “Estrangement” – but it was a very active period and one of considerable achievement, not least in keeping the Abbey going against all the odds.

With this volume as with the four before it, one stands in awe at the sheer scale of the project and the enormous diligence of the editors. From the beginning, the principle was to publish not only all of Yeats’s extant letters, but to record every act of written communication from him, reconstructing lost letters from other evidence. This includes letters written by those acting as his agents, as in the case of a long, densely reasoned argument by the American lawyer John Quinn on an issue of copyright. Simply assembling the material from libraries all over the world, from booksellers’ catalogues, and from private collections, must have been a huge undertaking, and transcribing Yeats’s all but illegible handwriting a nightmare. The editors’ overview offered by the fifty page introduction to this volume is masterly, making deft use of the detailed knowledge Kelly and Schuchard have accumulated. The text itself, all 975 pages of it, can be quite hard hacking for the conscientious reviewer trying to read it straight through. Inevitably there is a good deal of repetition, as Yeats fills in several correspondents with the same news. The annotation is utterly comprehensive; every single individual mentioned by Yeats, however glancingly, is identified and a detailed bio supplied. This means that quite often the footnotes, in their minute font, occupy half or two thirds of the page and Yeats himself, with his poor eyesight, would never have been able to read it. Sometimes one feels that less might have been more. At this time, Yeats was making his way through the 40 volumes of his collected Balzac in translation; do we really need a detailed synopsis of the plot of Les Chouans, which the poet himself dismisses as bad early work? However, it is ungrateful to carp. Volume V of the Collected Letters, like its predecessors, is invaluable as a reference work to scholars interested in any aspect of the literary and theatrical life of Ireland and Britain of the time. The Collected Letters, the first volume of which was published in 1986, still has twenty-eight full years of Yeats’s life to come; it must stand as one of the last great monuments of twentieth-century scholarship in a mode which will probably never be repeated.