by Michael Lydon. This text may be archived and redistributed both in electronic form and in hard copy, provided that the author and journal are properly cited and no fee is charged for access. 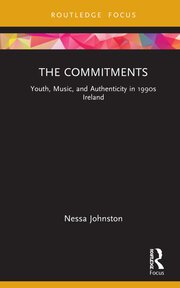 Nessa Johnston’s intriguing short monograph on Alan Parker’s film The Commitments (1991) begins with an observation about the cover of Ruth Barton and Harvey O’Brien’s edited collection Keeping It Real: Irish Film and Television (2004). The cover image of the collection is a still from The Commitments, featuring the Commitmentettes (Angeline Ball, Maria Doyle Kennedy and Bronagh Gallagher) and a crying baby being rocked in a buggy. Upon viewing the cover and title of the collection, one would assume that an assessment of The Commitments features prominently in the collection of essays. But as Johnston observes, this is far from the case, with no mention of the film in the collection at all. Barton acknowledges that “so determining of Irish cinema was The Commitments […] the publisher insisted on illustrating the volume with an image from it” (2019: 221). The film thus serves as a fitting visual representation of Irish film, or at least in the eyes of this specific publisher, albeit not deemed appropriate for academic consideration. Johnston uses this observation to enforce a central premise of her work; namely that academics have been reluctant to engage with Parker’s The Commitments, more often treating the film as an “inferior adaptation” of Roddy Doyle’s 1987 novel (2021: 2). Despite positioning Parker’s film as under scrutinised, Johnston proceeds throughout The Commitments: Youth, Music, and Authenticity in 1990s Ireland to outline pertinent academic assessment of the film. This illustrates the strengths and weaknesses in Johnston’s monograph. It is a work expertly researched, albeit at times inconsistent and incomplete in its analysis.

Fundamental to Johnston’s The Commitments: Youth, Music, and Authenticity in 1990s Ireland is an assertion that an appraisal of The Commitments should not solely view the film as text, “but also as a set of processes and shifting discursive formations” (2021: 4). Johnston notes: ‘My approach not only treats the film as the primary object of enquiry, it embraces its broader popular cultural significance, and moves beyond the film text to explore The Commitments as an event in 1990s Ireland’ (ibid.). In utilising Rick Altman’s notion of “cinema as event” (1992: 2), Johnston proceeds to outline in detail the cultural significance of the film. Central to this event-focused analysis, is the idea that despite the film’s British creative direction and American financial backing, it persists as “an Irish musical youth film” (Johnston 2021: 6). A point of analysis, Johnston insists is evident in the centrality of working-class Dublin youth culture to the film. She draws upon this point to position the film as a moment of Irish cultural awakening, made and released at a transformative period in Irish society, with the country on the cusp of the new European single market and the Celtic Tiger economic revival. Johnston writes: “the film reflects the reservations and aspirations of a young generation looking increasingly outward and beyond the social repression of the Catholic Church” (2021: 1). As an event-focused analysis, the chapters proceed to labour this central premise with primacy given to assessing the creation of the film; “investigating the extent that the process entered into dialogue with Dublin, its culture, and its inhabitants” (ibid. 3).

In Chapter One “A commitment to Dublin? From transnational co-production to locational specificity Beyond”, Johnston explores The Commitments as a “case study of transnational film production”, and the “marketability of the film’s conspicuous localism” (2021: 17). Johnston achieves this by assessing the film from various academic viewpoints, all which filter her findings through the event-centred analysis. An example of this is seen with the use of ethnographic input provided with interviews with Doyle, Gallagher, Ball, and others. These interviews are inserted throughout, but in the opening chapter are used effectively alongside newspaper reports to outline the film’s casting process and its significance to Dublin youth culture. Of particular interest in the assessment of the casting process, is the central role played by Ros and John Hubbard as casting agents. Johnston highlights the importance of the local knowledge the pair provided, as they worked closely with Parker to assure his vision of Dublin was brought to screen. The pair are shown to have found several of the cast from local music venues, providing the film with the “authentic” musical skillset required to play onscreen musicians. In another intriguing insight, Johnston uses her access to Parker’s personal papers to reveal the late director’s vision of Dublin, with Johnston observing a recurrent comment of “not our language” in the margins of early drafts of the script. While in a humorous comment, Parker insists that “a passing kid” mentioned in the script should be changed to kids as “It’s never just one kid in Dublin” (27). In all, the opening chapter is a fascinating insight into an energised Dublin youth culture, and Parker’s attempt to bring this energy to the screen.

In Chapter Two “’Say it loud, I’m black an’ I’m proud’: Intersections of race, class, gender, and youth on Screen and Soundtrack”, Johnston both narrows and broadens her event-focused analysis. Initially, this entails a look at Jimmy Rabbitte’s much quoted “I’m black an’ I’m proud” speech, a point in the film that “articulates his choice of black soul music as a form that speaks to a universal urban working-class experience, regardless of race” (Johnston 2021: 36). In focusing on the speech, Johnston observes that it in “itself is an act of interpretation” (2021: 38), arguing that this point of interpretation has seen the speech continually been re-interpreted to align with shifting views. An example she gives is the caustic use of the speech by one the film’s cast Michael Aherne at an anti- abortion rally: “Say it now, say it loud, I’m anti-abortion and I’m proud!”. Johnston’s assessment of the speech is a specific highpoint of the book. Nevertheless, as with much of the analysis in this short monograph (134 pages including bibliography) it feels incomplete. The chapter also incorporates in the film-as-event analysis, its commercially successful soundtrack albums. Although, this feels like an unnecessary broadening of the initial analysis. In another notable section in the chapter, Johnston astutely observes that throughout the film: “Moments of privacy for individual characters are rare” (2021: 46). She argues this lack of privacy is befitting Dublin’s social-economic environment at the time, with The Commitments’ ensemble cast to be understood as an expression of unity and marginality (ibid.).

In Chapter Three, “Youth culture and music scenes in 1980s and 1990s Dublin”, Johnston explores the “vibrant young music scenes of Dublin in the 1980s and 1990s and the influence of US and transnational musical subcultures” (2021: 58). As noted, Johnston’s The Commitments: Youth, Music, and Authenticity in 1990s Ireland often feels incomplete in its assessment. This results in moments where real insight is offered, but only in passing. This is certainly the case in the third chapter, where Johnston looks to position the success of the film alongside Irish popular music’s “embrace of African American music and blues-based rock” (2021: 59). Of specific interest in the chapter’s broad assessment of Irish popular music is the films embrace of “retro” music, with Johnston’s arguing that the film embraces “retro aspects” in the use of 1960s soul music; “the music is quite distinctly not of the young people’s time” (2021: 68). This idea is certainly of interest, albeit the assessment would have benefited by a consideration of existing work on “retro” and youth culture – such as Jean Hogarty’s Retro Culture in the Digital Era, a work which includes interviews with Dublin youth on their embrace of “retro” culture, and Simon Reynolds’ often cited Retromania: Pop Culture’s Addiction to Its Own Past. In another interesting, yet incomplete, assessment, Johnston highlights the interesting gender politics evident in the band The Commitments. She writes that Doyle’s original idea of the band covering “soul” music was it facilitated the inclusion of women in the band, as “rock” music (and other genres) of the era was almost exclusively male. Johnston writes: “If The Commitments had a female bass player or drummer, it would have been an interesting story, but a different one, perhaps not reflective of the unacknowledged male dominance of music scenes” (2021: 73). This fascinating assessment of the “problematic gender dynamic across music scenes” (ibid.) is reenforced with reference to existing work by Mavis Bayton, but again feels frustratingly incomplete with additional reference to Bayton’s “Women and the Electric Guitar” and Mary Ann Clawson’s “When Women Play the Bass: Instrument Specialization and Gender Interpretation in Alternative Rock Music” conspicuously absent. Nonetheless, the chapter continues to offer intriguing insight into the film-as-event, highlighting among other things a near cameo appearance by Van Morrison (2021: 64), and the appearance in the film of Peter Rowan as “Shy Skateboard Auditioner”; Rowan was the boy photographed for the covers of U2’s albums Boy and War (ibid.).

Chapter Four, “Songs and sonic authenticity: Mediating musical performance” looks to the “processes of sonic mediation associated with The Commitments” and explores ideas concerning the essence of soul music, demonstrating the importance of voice and self-expression to “soul authenticity” (Johnston 2021: 81). Again, the chapter offers moments of real insight into the “event” that was The Commitments, but due to the limitations of the short monograph, fails to fully engage with a point of analysis to any great degree. Notable from this chapter is Johnston’s consideration of the importance of technology in mediating people’s reception of music and “a distrust of technology [that] permeates both the rock authenticity that dominates music criticism […] as well as within the narrative of the film itself” (2021: 86). Engrossing also is the chapter’s look to Andrew Strong’s casting, punctuated with an assessment of the sixteen-year-old actor/singer’s raspy voice, which Johnston observes is often received as being an example of a voice indexed with “bad living” (2021: 94).

Johnston concludes her look at “Ireland’s most culturally significant and commercially successful film of the early 1990s” (2021: 108), with an exploration of the fame and fortune narrative metatext at the film’s centre (2021: 100). Specifically looking at Glen Hansard’s subsequent success, while also positioning the film as providing a template for “a recurring Irish youth musical” (2021: 106).  As noted, Johnston’s short monograph is frustratingly just that, short. Although, this is probably more a reflection on the limitations imposed by Routledge’s “Cinema and Youth Cultures” series than Johnston’s critical ability. In summary, Johnston’s The Commitments: Youth, Music, and Authenticity in 1990s Ireland is a skilfully produced body of research that situates The Commitments as an important “event” in the development of Irish, and specifically working-class Dublin, youth culture.

Reynolds, Simon (2011). Retromania: Pop Culture’s Addiction to its own Past. London: Faber and Faber.