The Edinburgh Companion to Irish Modernism

The Edinburgh Companion to Irish Modernism

by Matthew Fogarty. This text may be archived and redistributed both in electronic form and in hard copy, provided that the author and journal are properly cited and no fee is charged for access. 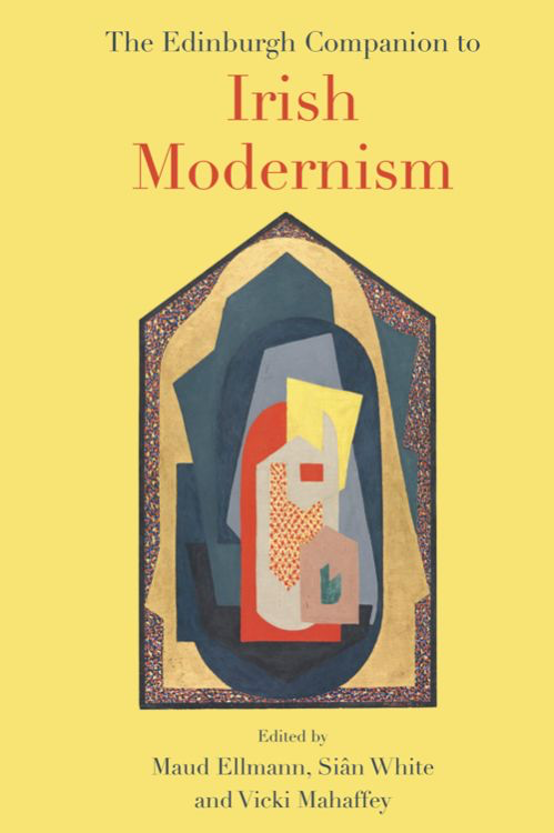 The Edinburgh Companion to Irish Modernism represents a veritable treasure trove of sociohistorical and geopolitical revaluations, inventive theoretical insights, and cutting-edge approaches to modern and contemporary Irish literature. Comprised of an introduction and five principal parts, all of which are five-to-six chapters in length, the volume draws impetus from two distinct but closely related theoretical strands. On the one hand, it sets itself apart from “other handbooks and critical anthologies by highlighting the ‘heresies’ of Irish modernism, its trademark resistance to orthodoxy and tradition” (2). As evidenced by the structural arrangement of the main body – Part I: Heresies of Time and Space, Part II: Heresies of Nationalism, Part III: Aesthetic Heresies, Part IV: Heresies of Gender and Sexuality, and Part V: Critical Heresies – this approach establishes a key theoretical touchstone, which also lends the collection a suitably flexible coherency. On the other hand, these heretical inquiries are frequently informed by the critical expansions described by Douglas Mao and Rebecca Walkowitz in their landmark 2008 essay, “The New Modernist Studies,” that is, “horizontal” expansions, which open the door to writers working outside the metropolitan epicentres most closely associated with aesthetic modernism and to writers working outside of the 1890-1945 time period, and “vertical” expansions, which complicate the distinctions between high art and popular culture. The outcome is a multifaceted and timely meditation upon the backgrounds, complexities, and legacies of Irish Modernism which casts new light on those to whom the term “canonical” has long been applied and foregrounds the significance of authors left too long to languish in the canonical shadows.

Even when this edited collection revisits some of the Irish cultural contexts that are traditionally associated with modernist art and literature, it does so in a nuanced way that highlights under explored dimensions. Using the Ordnance Survey of Ireland (1824-42) to analyse W. B. Yeats’s The Dreaming of the Bones, for example, Cóilín Parsons identifies a quasi-spiritual engagement with the 1916 Rising that blurs the boundaries between the local and the global and complicates what it means to be both “Irish” and “modernist.” Juileann Veronica Ulin observes a similarly complex engagement with nationhood in her detailed exposition of the postage stamp in early-twentieth-century Ireland, noting how it was used to endorse Irish independence and promote Free State values in the decades before and after partition. The puritanical bent of the Free State provides a backdrop for Kelly Sullivan’s critical overview of Irish visual culture, which ranges from the beginning of the Irish Arts and Crafts movement in the late-nineteenth century through to “The Emergency.” Much as Parsons’s and Ulin’s contributions invite reflections upon the tensions between selfhood and nationhood, Catherine Flynn’s analysis of the satirical Cruiskeen Lawn column, written in both Irish and English by Flann O’Brien, using the penname Myles na gCopaleen, for The Irish Times between 1940 and 1966, foregrounds a critique of Irish neutrality that invites correlations to be established between O’Brien’s humour and the subversive strain that Sullivan identifies in the bawdiness of Harry Clarke’s Geneva Window. Wendy J. Truman positions representation of the body in Yeats’s late poetry as a response to this cultural context. For his part, Ed Madden brings this historical backdrop to bear on A. J. Stanley’s under discussed 1940 play, Troubled Bachelors, and demonstrates how this text complicates conventional ideas around masculinity, even though the text itself is not formally or attitudinally unconventional.

Many of the chapters that look beyond these late-nineteenth and early-twentieth-century Irish cultural contexts offer new readings of familiar Irish literature. Emphasising the historical, geographical, and symbolic significance of the ocean, insofar as it operated as a conduit for imperial expansions, emigration, and insular images of “Irishness,” Nels Pearson foregrounds new dynamics in the work of W. B. Yeats, J. M. Synge, James Joyce, and Seán O’Casey, including the relationships between some of their major texts. Using scripture as a critical lens, Vicky Mahaffey reads Synge’s The Playboy of the Western as a blueprint for Irish Christian comedy that subsequently resonates in the humour of James Joyce, Samuel Beckett, and O’Brien, which establishes a heretical fraternity of sorts that revels in the mysteriousness that is often elided by orthodox religious worship. Likewise, in focusing on the gothic novels of Bram Stoker, Dorothy McArdle, and Scottish novelist, Neil Gunn, Luke Gibbons adopts a binocular approach that is informed by the lore of “second sight,” shared by Irish and Scottish Celts, and the traumatic legacy of the Great War. In her analysis of The Importance of Being Earnest, Kathryn Conrad sets Oscar Wilde’s text against a late-nineteenth-century backdrop that includes the activities of Irish revolutionaries and French anarchists, in particular the 1884 explosion at Victorian Station, and uncovers veiled textual allusions to this event that underscore the incendiary qualities that permeate Wilde’s humour. With specific reference to the contemporaneous cultural debate around social degeneration, Seán Kennedy and Joseph Valente identify Max Nordau’s Degeneration as a locus for Beckett’s sustained engagement with bodily and textual failure, citing Winnie’s truncated repetitions in Happy Days, not as a marker of degeneration, as Nordau would have it, but as a vehicle to express that which is most brutal, overwhelming, and inexpressible.

There are also chapters that deploy a broad range of theoretical approaches to reinvigorate our understanding of familiar literary works. Taking a wide-angle approach to Elizabeth Bowen’s fiction, for example, Maureen O’Connor brings new materialism into a productive critical dialogue with contemporary developments in nonhuman studies, which ultimately highlights new ethical dimensions within the depths of Bowen’s literary worlds. Inspired by the notoriously fraught terrain of “commemoration,” Paul K. Saint-Amour reads Ulysses’ “Dublin’s burning” passage as an untimely meditation upon the potential existence of alternative pasts, unrealised presents, and banished futures, one which connects the Easter Rising to comparable societal ruptures, both in Ireland and beyond, and disrupts the national narrative that is conveniently bolstered by the events of 1916. Noting that Joyce’s 1907 essays, “Ireland at the Bar” and “Ireland, Islands of Saints and Sages,” are premised by historical inaccuracies, Jeremy Colangelo positions these prose pieces as precursors for the central role performed by gossip and rumour in Finnegans Wake. Margot Gayle Backus also focuses on Joyce’s writing, alongside that of Yeats, and demonstrates how their respective engagements with “stolen children” establishes a point of resistance to contemporaneous celebrations of British white supremacy. Claire Connolly looks at Yeats as well, setting his lesser discussed 1891 novel, John Sherman, alongside Mike McCormack’s 2016 novel, Solar Bones. Through the lens of ecocriticism, Connolly shows how their respective descriptions of water and waterways offer a poignant snapshot of modernisation and its environmental costs.

There are undoubtedly scholars who might baulk at the prospect of a contemporary novel featuring in a companion to Irish modernism, although one might also question how judicious it is to preserve the integrity of labels, such as “modernism,” if the price involves shutting down avenues of critical debate. Depending on where one stands in relation to this issue, the emphasis placed on literature published in the late-twentieth and twenty-first centuries is either perfectly in keeping with the volume’s definition of Irish modernism as “heretical” or a testament to the importance of keeping open these avenues of critical debate. In her analysis of Eugene McCabe’s “Victims” (1976), Benedict Kiely’s Proxopera (1977), and Anna Burns’s No Bones (2001), for example, Maud Ellmann plots a through line from Joyce’s playful yet pointed reflections on partition in Finnegans Wake to contemporary concerns around Brexit and the future of the peace process in Northern Ireland. Likewise, in focusing on the legacy of modernist experimentation in Emma Donoghue’s Room (2010), Eimear McBride’s A Girl is a Half-Formed Thing (2013), and Anna Burns’s Milkman (2018), Siân White explores how these contemporary writers mobilise literary form in a manner that reaffirms the credibility of survivors’ first-hand testimonies in the context of the #MeToo movement. And in establishing how the constrictive values endorsed by the Irish Free State finds something of a corollary in contemporary capitalism, Ailbhe Darcy examines how the Irish-language poetry of Nuala Ní Dhomhnaill and Eiléan Ní Chuilleanáin rejects simultaneously the remnants of Catholic Ireland and its secular neoliberal counterpart.

There are, of course, essays that expand the horizontal and vertical parameters of modernism in less radical ways. In her examination of consumption in Molly Keane’s 1980’s writing, for instance, Lauren Rich observes both a belated representation of the Protest Ascendancy’s decline and a mode of consolation for those intent on subverting the class and gender roles that bolster Big House culture. Shan-Yun Huang expands both the temporal and spatial boundaries of modernism by tracing Joycean echoes in Wan Wen-hsing’s Family Catastrophe (1972), and in doing so identifies comparable strands of debate around modernisation and cultural nationalism in early-twentieth-century Ireland and post-war Taiwan. Others expand the vertical parameters of modernism by complicating the distinction between “high art” and “popular culture,” such as T. J. Boynton’s detailed exposition of how the image of the pious female reader becomes an emblem of dissidence in the hands of Synge, Denis Johnston, Joyce, Flann O’Brien, and Beckett. Indeed, Matthew Brown further complicates this distinction by showing how the “insurgence romance,” a popular genre in early Irish cinema, drew upon aspects of aesthetic modernism even as it sentimentalised revolutionary activity from the eighteenth and nineteenth centuries. Like Brown, Sarah E. McKibben takes Robert Flaherty’s fictionalised documentary, Man of Aran (1934), as a starting point in a chapter that expands the parameters of Irish modernism to include the Irish-language prose fiction of Pádraic Ó Conaire. Others further complicate the trajectory of modernism in Ireland. Sarah L. Townsend, for example, highlights how the early twentieth-century realist dramas of Rutherford Mayne, Padraic Colum, and T. C. Murray reject Revivalist romanticism. Turning to mid-twentieth-century Irish poetry, Eric Falci observes how long poems penned by Patrick Kavanagh, Brian Coffey, and Sheila Wingfield occupy an experimental liminal space between the lyric and the epic.

In all of these and many other ways, The Edinburgh Companion to Irish Modernism makes a vital contribution to the ever-expanding field of Irish modernism. However, it also speaks to a plethora of topics which resonate with our contemporary cultural moment, both in Ireland and beyond, such as white supremacy, climate change, neoliberalism, precarity, misogyny, and the fragility of peace, to name but a few. In doing so, this collection serves a timely reminder that heretical resistance is both a vital and incredibly potent transformative tool.