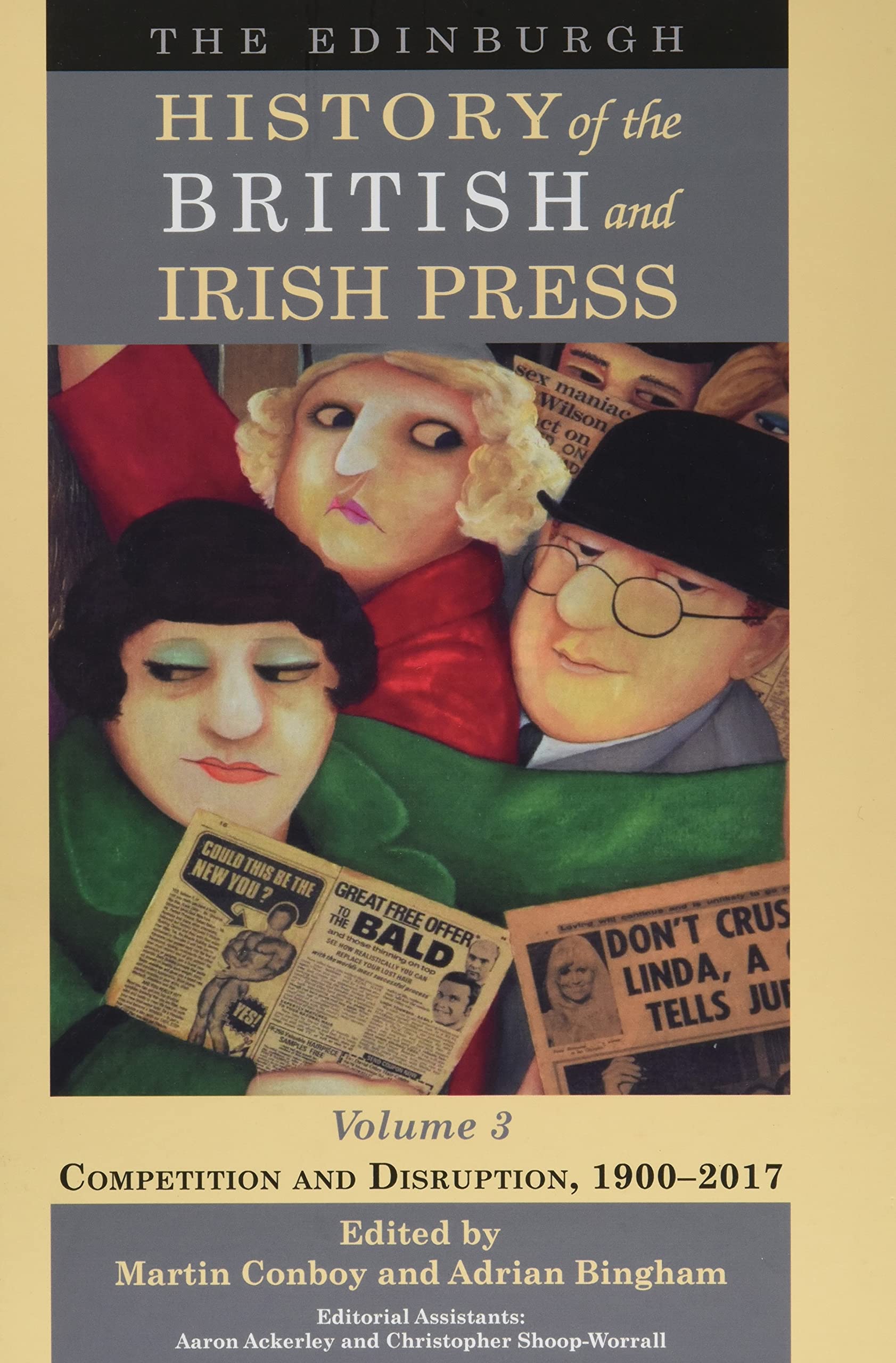 The Edinburgh History of the British and Irish Press is an ambitious three-volume history covering a period from 1650 to the present day. Edited by Martin Conboy and Adrian Bingham, volume 3 examines a “long twentieth century” (xxvii) between 1900 and 2017. Across 33 chapters, the book covers a wide range of topics from the evolution of news production technologies to the characteristics of different genres and presses such as literary journalism and the LGBTQ press. With justification, Martin Conboy notes that the 43 contributing authors have provided “a more comprehensive review than has ever been compiled before in one volume” (662). From an Irish studies perspective, there are many interesting insights into the history and challenges of Irish journalism.

However, the volume is often frustrating. Individual contributions are engaging and relevant, but they collectively suffer from a lack of conceptual clarity and editorial curation. There is an overall failure to grapple with the geographic scope of the title and the complex identities it entails. In the preface, the editors state that contributors were asked to be “expansive in their coverage” (xxvii), but only 12 of the 33 chapters attempt to engage a history that includes both Britain and Ireland. Strangely, given his role as co-editor, Adrian Bingham’s introduction has a singular focus on the “British press” and its relationship to “British politics, culture and public life” (4). Yet, the period in question is one in which Ireland became independent; devolved governments emerged in Wales, Scotland, and Northern Ireland; and the movement for Scottish independence has grown.

The editorial inattention to regional identity is exemplified by lack of precision in chapter titles and the selection of opening chapters to contextualise “the central features of the environment”. Too many of these chapters are restricted to a narrow focus on England or the UK. For example, Tom O’Malley’s chapter on “readership and readers” is specifically about “newspapers and their readers in the UK” (83) while Julian Petley’s chapter on “regulation” is exclusively about England and Wales. Readers seeking to understand the devolution of press regulation in Scotland and the history of Ireland’s draconian libel and defamation laws will have to look elsewhere.

Across the remaining thematic chapters, it is hard to understand why the editors did not use cross-referencing to highlight overlaps and broader geographic coverage. For example, Maggie Andrews and Fan Carter’s chapter on “women’s magazines” concerns “women’s political, economic and cultural position in British society” (299). In contrast, Kaitlynn Mendes and Jilly Boyce Kay’s chapter on “feminism and the feminist press” focuses on both Britain and Ireland in order to “challenge what has been identified as a highly London-centric approach to the history of the women’s suffrage movement” (468). In this and other cases, the lack of cross-referencing is a missed opportunity to acknowledge the regional scope of the contributions.

Notably, numerous contributors highlight the need to counterbalance histories that have, as Robert Campbell observes, neglected “the nations and regions of the British Isles” due to “the perceived hegemony of London’s newspaper business” (69). Similarly, Simon Gwyn Roberts argues that the Welsh press has been neglected by media historians while the fragmentation of Welsh identity “is often not fully appreciated outside the nation” (316). The tricky issue of identity is also explored in Nora Moroney and Stephen O’Neill’s chapter on the Belfast press. Elsewhere, many contributors invoke Benedict Anderson’s (1983) seminal thesis about the role of national print media in the formation of nation states. However, Simon J. Potter critiques Anderson’s concept of an imagined community as “a radical simplification” if “useful shorthand” (434). It is regrettable that the editors did not pay more attention to the identity issues raised by their contributors or order the chapters in a way that highlights the historical contexts of the regions under consideration. Mark O’Brien’s chapter on the metropolitan press highlights “the intricate web of connections within the press industry linking Ireland, England, Scotland and Wales” (626) including individual editors and “newspaper markets that operated on and between both islands” (627). This geographic contextualisation is left until the penultimate chapter.

The above criticisms do not imply that the volume lacks interest for scholars of Irish studies. In contrast to Scotland, Ireland is well served. Aside from specific chapters about Ireland, some contributors embraced the geographic scope of the volume’s title. Jonathan Hardy’s engaging chapter on economics successfully combines an analysis of Britain and Ireland by highlighting commonalities and differences between the two regions including the unique dynamics of an Irish market structured around the “religious affiliations of owners, readers and advertisers” (37). Olive Vassell’s chapter on the black British and Irish press notably includes an Irish case study even though Ireland generally lacked “a critical mass of individuals and black scholars advocating for having a voice” (408). In the process, Vassell astutely comments on the class distinctions evident in Irish-African publications, which contrast with “the asylum seeker and immigrant narrative so popular in white Irish society” (409).

Mark Hampton’s chapter on transatlantic exchanges charts the “shared cultural ideas and institutional practice” (164) that informed journalism on both sides of the Atlantic. He notes that Ireland has been “a significant contributor to the “Anglo-American’ model of journalism” (155) given its relationship with Britain and history of emigration to the US. The chapter includes a case study of Niall O’Dowd, the Irish-born journalist who founded Irish America and The Irish Voice. Other chapters discuss news agency coverage of the Troubles; the merger of An Phoblacht and Republican News into AP/RN; news photography and Irish independence; and the reading cultures of literary and review journalism.

Perhaps one of the more intriguing chapters from an Irish studies perspective is Regina Uí Chollatáin’s contribution on Irish language media. Contrary to the impression of animosity between Irish and English language media, she argues that “the English-language press [was] a valuable ally” (334) to Irish-language writers through Gaelic columns and the serialisation of short stories. Uí Chollatáin puts emphasis on transnational exchanges by migrant writers and, citing Máire Ní Chinnéide, the role of Irish print journalism “as a medium for ‘expansion of thought’” and “those important ‘conversations’” (351) at the core of a public sphere. Nevertheless, she points to the marginal role of Irish-language print media in contrast to Irish-language broadcasting, which has “moved to the centre of the broader Irish mediascape” (336). The chapter makes an interesting companion to Robert Dunbar’s analysis of the Scottish-language press.

There is much to value in the individual contributions to The Edinburgh History of the British and Irish Press including the chapters that investigate the media history of regions beyond Ireland. Unfortunately, readers may have to do the hard work of piecing together different histories and themes across the chapters.

Anderson, B. (1983). Imagined Communities: Reflections on The Origin and Spread of Nationalism. London: Verso Books.