The European Avant-Garde: Text and Image by Selena Daly and Monica Insinga (eds.)

The European Avant-Garde: Text and Image by Selena Daly and Monica Insinga (eds.)

by Jonathan Owen. This text may be archived and redistributed both in electronic form and in hard copy, provided that the author and journal are properly cited and no fee is charged for access. 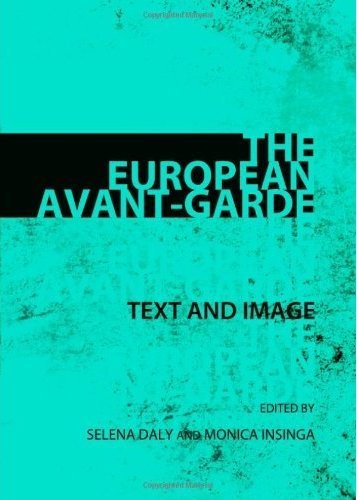 Introducing this original, well-researched collection of texts by emerging scholars about Europe’s avant-garde movements, King’s College Emeritus Professor of German John J. White identifies a telling tendency in earlier literature on the subject to refer to “the avant-garde” – as though the internally unstable, geographically dispersed and sometimes ideologically opposed range of artistic-political groupings that dotted interwar Europe could be considered a unified and monolithic ‘macro-movement’. Clearly this collection is concerned with the avant-garde as a plural, conflicted phenomenon, and with extending our awareness of avant-garde activity beyond familiar reference points. Thus the book includes chapters on countries not generally acknowledged to have produced avant-gardes of note – Poland, Ireland – and on artists who are either little remembered or whose alignment with avant-garde modes and creeds may be controversial – Joyce, Pirandello, even George Bernard Shaw.

White’s introduction gives a welcome précis of the current state of Avant-Garde Studies, commending the discipline’s profitable interaction with other academic fields such as “gender-, translation- and reception-studies” but suggesting that it could benefit from further exploration of exile as a determining and widely shared condition of twentieth-century avant-garde artists. In this way White adumbrates some of the major themes of this collection, which is divided into sections covering, in order, the representation of the body; the translation of avant-garde texts (as well as the avant-garde translation of texts); identity and exile; and the transnational relations and legacy of the avant-garde. Of all these concerns, the focus on bodies and gender is the least original, even if Fiona Noble’s discussion of Dalí’s “violated bodies” in the first chapter offers a corrective to prior scholarship, for which Surrealist dismemberments were merely misogynist attacks. This first thematic section might also seem slightly out of place considering the inter-cultural emphasis that makes the other three sections a coherent whole. In practice, however, these early chapters do connect to themes pursued in the later ones, with, say, the study of the dissolution of gender binaries by Dalí or fellow Surrealist Claude Cahun (in Rebecca Ferreboeuf’s chapter) complementing the issues of cultural and aesthetic liminality explored elsewhere.

Indeed, this book offers rich thumbnails of some of the avant-garde’s more complex and awkward personalities, of artists, famous or obscure, who stood between countries or continents and between different national movements – for instance Italian poet and artist Ardengo Soffici, torn between the bellicose Futurist movement and the melancholic French poet Apollinaire, or Beat poet Lawrence Ferlinghetti, self-conscious son of American and European literary heritages. We encounter displaced, eccentric and individualistic characters such as French-based, Surrealist-influenced Irish poet and publisher George Reavey,  and Polish writer, painter and psychic adventurer Stanisław Ignacy Witkiewicz (“Witkacy”), as well as figures at the edge of the avant-garde who enriched it in defying its key tenets, like modernist luminary Ezra Pound, discussed by Giovanna Epifania. Rejecting the scorched-earth anti-traditionalism of a Marinetti, Pound believed in the power of translation to remodel classical poetry in contemporary, experimental terms, to uncover the modernity of the past.

Alongside the artists’ own straddling of cultural and national borders, this focus on translation makes for a study of how a single text may be pulled this way or that across aesthetic as well as linguistic boundaries, moulded to new avant-garde affiliations, its experimental character emphasised or attenuated. One of the most interesting chapters is Chih Hsien Hsieh’s analysis of two Mandarin translations of Joyce’s Ulysses, which reveals how conflicting interpretations of Joyce’s achievement and its relevance for Chinese culture resulted in two very different translations, variously stressing the book’s “ugly” realism and its formalist beauty.

Valid and engaging as the book’s study of liminalities and hybridities is, the question of how precisely to define and delimit the avant-garde might have been addressed more consistently, especially when discussing such debatable exponents as Joyce and Shaw. In these chapters avant-garde credentials are more or less assumed, the question of what these comprise bracketed, even as such hard definitions as those of Peter Bürger are examined elsewhere. For example, while David Clare’s discussion of Shaw’s “reverse snobbery” makes for an entertaining and perceptive chapter, the extent to which this characteristic is avant-garde in any more than a generalised sense of “modern” and provocative is not satisfactorily answered. The potential for apposite connections is there – Shaw’s Life Force as offshore counterpart to the continental avant-gardes’ cult of barbarism and folk vitality? – but these connections could have been made explicit.

The book’s chapters are short, often around ten pages or so, and this bite-sized approach makes the book an accessible read, as does the contributors’ generally lucid and assured writing (the fact that most of the authors are still doctoral students or recent PhD graduates is betrayed only in the occasional tendency towards theoretical over-exposition or, conversely, in rare clusters of unglossed technical terms). In places, the chapters’ brevity has not enabled much extension beyond introducing a fascinating set of artistic alignments, but for the most part the authors use the limited space successfully, mixing close, penetrating textual analysis with wider cultural and historical perspectives. Chih’s chapter, for instance, wisely restricts its comparison of translation styles to a single chapter of Ulysses (the daunting “Oxen of the Sun” chapter). The authors ingeniously locate the philosophical devil in the textual detail, as when Selena Daly uses Marinetti’s decision to repeat the exclamation ‘Higher!’, in his Italian translation of his own play Le Roi Bombance, to confirm Marinetti’s re-orientation of the work towards Futurism and its “striving for the Absolute”.

If the formidable Marinetti is a slightly over-dominant presence here, this collection nonetheless offers an enjoyable array of lesser-known personalities and canonical figures seen from new angles. Similarly balanced is the attention paid to the two components of the book’s subtitle, text and image, with consideration too for the relatively under-examined avant-garde medium of drama. The subtitle’s conjunction itself proves telling, for the collection also does justice to yet another form of boundary-crossing, that intermingling and blurring of verbal and visual media that was so characteristic of the avant-gardes’ still potent, still not fully assimilated, artistic radicalism.