by Elke D’hoker. This text may be archived and redistributed both in electronic form and in hard copy, provided that the author and journal are properly cited and no fee is charged for access. 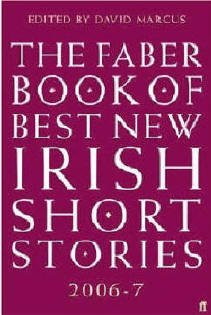 Ireland has always been proud of its short story tradition – and quite rightly so. If in England the big, looming presence of the novel traditionally outclassed shorter forms, in Ireland the short story has been able to flourish as a separate artistic genre. Writers as diverse as Frank O’Connor, Mary Lavin, Liam O’Flaherty and Sean O’Faolain published their best work in this form and many other great Irish writers have contributed significantly to the genre. And even though Irish writers in general seem more committed now to the form of the novel, the short story has certainly participated in Ireland’s literary boom of the last two or three decades. The literary editor who played a major role in promoting this renewed attention for the short story is David Marcus. Since the 1980s he has edited and issued a steady stream of anthologies, dedicated to “new Irish writing” or “best Irish short stories” in one form or another. The latest product of his seemingly tireless zeal is The Faber Book of Best New Irish Short Stories 2006-7, the follow-up of a similar volume published in 2005.

Although the title promises the “new”, Marcus returns in his introduction to the glorious past: from the ancient Irish tradition of seanchai to “some of the great Irish women writers of the past”, who –in a gesture towards redressing the gender bias – receive special attention. Apart from a vague reference to the “Irish women writers of today who also write stories and novels”, Marcus has nothing to say about the writings he has collected in his new anthology. If this odd silence in the introduction can still be explained in terms of the marketability of Ireland’s glorious literary past, it is far worse that this orientation towards the past also seems to have determined the selection of the short stories itself.

It is true of course that the “new” in the title does not necessarily refer to new writers. But surely, the greatest joy of reading anthologies such as this is the discovery of new voices among the more established ones? In fact it was this book’s predecessor which led me to the discovery of such marvellous new Irish writers as Molly McCloskey, Claire Keegan, and Sophia Hillan and I have sought out and enjoyed all their work that came out. Sadly, however, this book has yielded no new discoveries for me. The great majority of the 24 writers published here are (more or less) well-established old hands in their fifties and sixties  and only one, Emma Donoghue, is under 40 (39 to be precise). I am quite sure there is more “new” literary talent to be found in Ireland, but perhaps David Marcus is – after publishing over 30 anthologies – no longer the person best placed to find it?

As for the quality of the stories that have made their way to this collection, it is fair to say that there are a few gems, a fair number of good stories but also quite a few who fail to pass the mark. Moreover, there are some stories which do not really qualify as short stories, such as John Banville’s “First Light”, which turns out to be the first chapter of a new novel he is writing, and Eilis Ni Dhuihne’s entertaining sketch of the Dublin art milieu in “A Literary Lunch”, which reads like a try-out for the novel she has just published.

One of the true gems in this collection is Carlo Gebler’s “Room 303”, which describes a divorced couple’s slow rapprochement as they come to grips with the death of their only son some years ago. Equally breathtaking is Joseph O’Connor’s rendering of the last thoughts and conversations of a middle-aged Dubliner, whose wife has left him. The man’s depression is spelled out in touchingly understated prose as he takes leave of his father and prepares for his suicide. A quite different approach towards ‘the end’ can be found in Mary Dorcey’s “Another glorious day”. It is the first-person account of a demented old lady, whose short-time memory is totally gone. At first, the reader struggles together with the narrator to make sense of her surroundings – “When I wake in the morning, if it is the morning, I don’t know where I am or who I am”. Yet when the situation becomes clearer – through rather absurd conversations with nurse and daughter – one comes to marvel at the spirits of the old lady whose limited life is cheered up by her remaining knowledge of poetry and songs and by her quiet enjoyment of every ‘glorious day’. The great sensitivity and artistic exactness of Dorcey’s story becomes all the more pronounced when it is compared with a similar first-person account of an equally disoriented woman who wakes up in a mental institution. Yet this monologue – in Mary Leland’s “Waking in a Strange Place” – is more angry and artificial and somehow fails to convince. Another story I was pleased to discover here was Anne Enright’s “Yesterday’s Weather”. It admirably captures that curious compound of tiredness and love, of tenderness and indignation of a young mother who finds her world – and relationship – turned upside down by the arrival of a new baby.

Confronted with an anthology of new writing, a reviewer is always tempted to try and trace patterns or discern new trends. However, there is little to be gained from this collection. There are some striking similarities, such as the first-person monologue in Leland’s and Dorcey’s stories or the melancholy tone in the stories by Anthony Glavin and Joseph O’Neill, which both feature middle-aged men looking back on their lost youth. There is also a group of stories about writing or the writing life itself: Michael Farrell’s “The Written Word”, Aidan Matthews’ “In the Form of Fiction”, Harry Clifton’s “A visitor from the Future” and Eilis Ni Dhuibhne’s “A Literary Lunch”. Yet with the exception of the last story, these are all rather boring stories, too much enclosed within the writer’s own world.

The other stories, luckily, roam more widely: from Wexford to California and from Dublin to the Baltic states. The topics addressed are of a startling variety too: from gold-digging in Yukon over dark deeds in the Dublin underworld to a struggle with dementia in Bray. It is true, there are few ‘familiar’ stories of sexually repressed priests (Patrick McCabe) or the tragedies of nationalism (Dermot Bolger), but on the whole this collection provides ample proof of the fact that the Irish short story has gained considerably in scope, if not always in quality, since the heydays of the “three O’s” so glorified by David Marcus.