by Meg Tyler. This text may be archived and redistributed both in electronic form and in hard copy, provided that the author and journal are properly cited and no fee is charged for access. 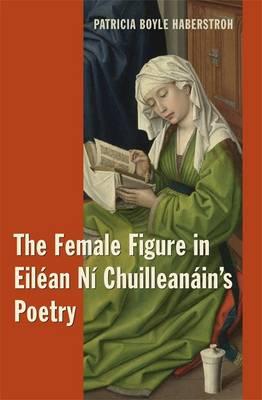 Patricia Boyle Haberstroth’s monograph, The Female Figure in Eiléan Ní Chuilleanáin’s Poetry has lucid force. Unlike other volumes of criticism devoted to literature and gender studies, jargon does not interfere with the readability of her prose. And even if you are not necessarily absorbed by discussions or conceptions of gender, her prose is clear and workmanlike enough that the book deserves attention. She is more interested in the poems than in doctrine. Haberstroth looks at Ní Chuilleanáin’s verse with a quiet and likeable conscientiousness, as if she were carefully studying a portrait or landscape, trying to read as much out of it as she reads into it. It comes as no surprise then that she teaches in a department of Fine Arts. Her eye attends to balance and proportion. Her sensitivity to the details of the poems – as poems – and the oblique quality of their beauty pays off. This is in many ways an admirable work of criticism, not bogged down by its politics.

As Haberstroth remarks at the outset, “Ní Chuilleanáin’s intention is not to write only for and about women, nor to present any unvarying truth about women’s lives” (1). Instead, we are told, the poet argues for the “psychological importance of images.” Ní Chuilleanáin “believes” that “a woman artist may also aspire towards creating an image of herself and her sex from a feminine point of view, and by a logical progression she arrives at an outlook on the whole of human experience which, by that originality of perspective, is able to explore what has been missed by the male vision.” Haberstroth delineates the historical representation of women – as speakers and subject in Irish poems – as being one-dimensional. Ní Chuilleanáin, on the other hand, foregrounds them as “subjects and speakers.” This creation of new images of women provides an alternative to a “relentless narrative of male heroes” (3). Of male subjects in her poems, Ní Chuilleanáin once said: “I tend to see male faces in my poems as averted. Perhaps because I want to stress that I AM LOOKING AT THEM as usually the woman is being looked at” (13). Haberstroth envisions Ní Chuilleanáin as one who emphasizes the “materiality and sexuality of the female, reaching into folklore and myth to create new versions of older images, refocusing our views of the lives of nuns and saints so we see them in a new light” (21).

A strength of the book lies in the sections on Ní Chuilleanáin’s incorporation of folklore, legend and myth into the poems. Folklore and fairytale play with and try to disrupt convention. Haberstroth cites the poet:

I think women in general are inclined to use folklore…the folk imagination is never able to leave women out. The structures and institutions find it easy to omit women, but I think that because of the way the folk imagination works, it always seems to come up with striking female images (71).

Like Wallace Stevens, Ní Chuilleanáin’s eye is on the threshold of realms, the actual and the dream, the factual and the fictive. She is intrigued by crossings over into the other, where human and animal meet. She inverts the image of male hunter pursuing a female deer in “The Girl Who Married a Reindeer.” But is the emphasis as much on the gender transmutation as on the messy divide between people and beasts?

There is a respect here for Ní Chuilleanáin’s vision and understanding, especially about the poet’s unwillingness to have her poems necessarily categorized as female. This is where balance enters the argument. Haberstroth also credits Ní Chuilleanáin’s questions about the poststructuralist arguments concerning voice – she feels her “poetry ha[d] a coherent subjective voice which she recognized as her own” (33). The gesture of foregrounding the female figure in a work of art may seem passé — we are no longer first-time readers of Betty Friedan. But it is worth remembering how vital a role Ní Chuilleanáin played in the arts in Ireland in the sixties and seventies, when few women poets featured largely or even visibly on the poetic scene. No doubt it took strength and resilience to craft a voice and give shape to a way of seeing that did not conform to traditional representations of the female (and by this I mean angel or shrew).

That being said, it is hard to think of many collections of poetry in which the female figure is not a central image. But there are plenty of poets who may give it less dignity than mystique. As Haberstroth writes,

In working against stereotypes, Ní Chuilleanáin takes advantage of the possibility for renewing an image. Not only does she undercut gender constructions as she portrays confident women working both in and outside the home, she also gives importance to domestic work, challenging the division of private and public realms and action which gives less importance to work inside the home (152).

What makes Ní Chuilleanáin a poet to reckon with is that the poems do not depend upon representing the female (image or otherwise) for their vitality. Her poems have an otherworldliness and astuteness that is beyond any gender categorization. For me, the poems do not announce a gender-affiliation but instead successfully lose the identity of the author (if anonymity is a condition of good poetry). Haberstroth is right to laud Ní Chuilleanáin’s ingenuity and persistence. While my sympathies lie entirely with the predicament of women poets who must write alongside men who receive perhaps undue amounts of public acclaim, I also worry about trying to persuade readers that a woman poet’s value lies primarily, or even largely, in her depiction or reinvention of the feminine or the female in the text. Invention is “the action of finding out.” There is still much to be discovered in Ní Chuilleanáin’s poetry, which has, as Heaney says “second sight.” The breadth and reach of it move beyond circumscribed boundaries. As Ní Chuilleanáin writes in “Fireman’s Lift,”

We saw the work entire, and how the light

Melted and faded bodies so that
Loose feet and elbows and staring eyes
Floated in the wide stone petticoat
Clear and free as weeds.