by Flicka Small. This text may be archived and redistributed both in electronic form and in hard copy, provided that the author and journal are properly cited and no fee is charged for access. 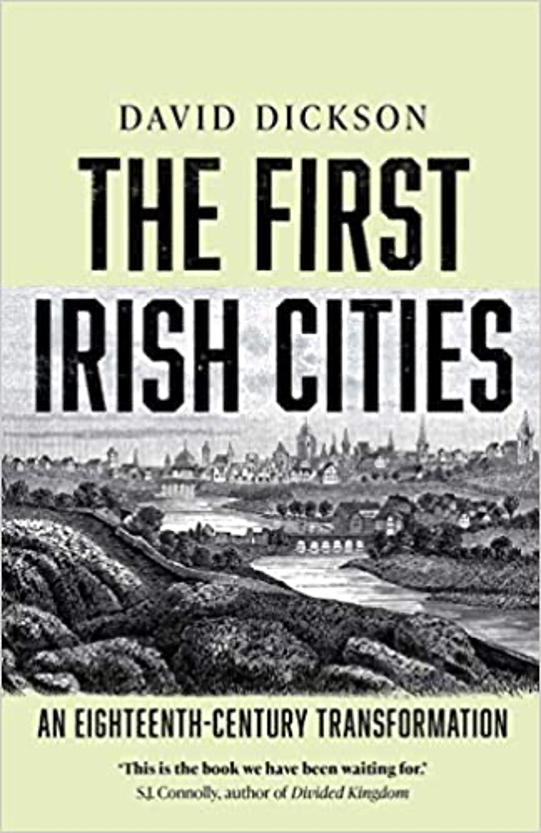 I came to this book with two overriding interests: food and its commodity culture, and Cork City. I work in one and live in the other. However, nothing exists in a vacuum, and this book is packed so full of charts and comparisons that I became totally immersed in every part of the book. Invasion, settlement, colonisation, and shipping are all strong contenders for contributing to Ireland as we know her today, particularly the development of ports and urban areas of Dublin, Derry, Waterford, Drogheda, Belfast, Kilkenny, Limerick, Sligo, Galway, and Cork, which are all covered in this worthwhile publication. This is not a coffee table book but a very well researched analysis of the commerce and social life of the First Cities of Ireland replete with black and white photos, colour plates, maps, tables, and appendices and a comprehensive bibliography divided into sections. There are also copious footnotes.

Where to start, for the book is packed with interesting facts and figures, especially when comparing and contrasting the diverse range of influences and conditions of the given Irish cities. However, this book is divided not by city but by chapters that chart their development from walled enclosures through foreign trade, manufacturing, religious rivalries, urban improvements, print culture, and social conflict. Sometimes it is easy to forget the industries that are now lost or that went before, or why a city is renowned for its butter, for example, or why the small inland town of Kilkenny became a city. We know that we have plenty of grass for grazing and the resulting cattle trade, but could we enumerate all the industries that this grazing spawns, or the wealth that ensues from kitting out crews and ships on their way to Newfoundland or the Caribbean?

My first mistake was to turn to Chapter 8, “Food for Thought” (184), thinking it was a chapter about food. I was wrong. Food matters are in fact discussed in great detail in the chapter named “The Keys of the Kingdom” (54). “Food for Thought” is actually about learning and the significance of a book trade of which I was quite unaware. It is about the literary legacy of Ireland and the primacy of the book, symbolised by Trinity library, a “great warehouse rising out of the marshes,” which was visible to mariners entering Dublin Port as early as 1732 (184). The other great library of the time was Archbishop Marsh’s library, located next to St Patrick’s Cathedral.

Dickson charts the transformation in size and function of the first cities of Ireland during the “long” eighteenth century, from the 1660s to the 1820s, and their active participation in trade and far reaching significance. He assiduously deals with issues of religious composition, education, economy, commerce, law and order, and social change. He also considers how the geographical ebb and flow of migrants to and from Ireland has impacted on the social and cultural diaspora worldwide. This book is not Dublin-centric, but having said that there is a massive emphasis on Cork. This is hardly surprising, having as it does such a deep water and safe harbour on the route from Africa to Bristol to the Caribbean, facilitating ships taking on board cargoes of salt bacon and butter en route. Cork was the larder of the British slave islands, controlling all aspects of the beef trade and the centre for butter exports (60). In the late seventeenth-century, three quarters of the vessels sailing from English ports to the Caribbean stopped off either in Cork Harbour or Dublin. Similar to the fast fashion industry of today, there was a middleman, so that those making the profit from engaging with the slave trade were not the actual owners of the ships that transported the cargo.

Limerick benefited from Cork’s pre-eminence, by proximity and filling the gap in supplies when Cork ran short (64). Indeed, several Limerick families became major traders in France and the Caribbean. One, David Creagh, bought a plantation in Barbados and in 1718 the Prosperity sailed into Barbados with 92 slaves (65). Limerick also traded with the Dutch whereas Waterford tended to trade with the European Continent. Cadiz in Spain had the largest Waterford colony anywhere on the continent (66). Waterford was also a stopping-off point between the West Coast of England and Newfoundland for the fishing on the Cod Banks, resulting in many Waterford firms having family connections in St Johns (67).

Belfast was not ideally positioned for trade with southern Europe or transatlantic trade stop-overs, but developed a linen industry taking delivery of flaxseed, rum, flour, sugar, and tobacco on ships returning from America. Transporting indentured servants from Belfast to North America was a form of human trafficking that also flourished in Derry. Kilkenny, the only inland city, was not lacking in commodities and services, and the growth of Dublin led to its vitality. A workshop economy based on textiles meant that worsted blankets were the staple manufacture up to 1820. Valuable agricultural land supported the growing of large quantities of wheat, making it the breadbasket of Dublin. In addition, coal was mined in Castlecomer and polished black marble was highly sought after for chimney pieces and tables (69). Kilkenny was strategically located on the main Cork, Waterford, Dublin road, which led to a flourishing business in wholesale beers and an influential provincial newspaper. Grocers, predominantly Catholic, dominated the retail trade, and there was a healthy service industry in the roadside inns (70). Drogheda was well placed for cross-channel trade, particularly with Liverpool. The trade in linen yarn was superseded by food exports of oats and oatmeal, wheat, and flour. By 1780 Drogheda had become the largest grain market in the country. However, this led to food riots directed at exporters and the ships on the quay.

This development of the cities through commerce and expansion led to advances in architecture and the arts. The 1720s saw the first shops to have glass windows and the introduction of a browsing space and display cases. The Wide Streets Commission, established in 1757, assumed the presence of shops and gave a European boulevard ambience to the city. Present-day friends of the Crawford will be interested to read that a short-lived group called The Cork Society for Arts and Sciences, engaged a local architect Daniel Murphy to produce a city map with proposals for new streets and bridges. He proposed to establish a street from Fenns Quay to the Custom House which would add beauty and health to the city, but it was never realized (166). The Custom House now houses the Crawford Art Gallery at Emmet Place.  I also discovered that flooding in Cork is not a new phenomenon; a great flood occurred there in January 1789 (167).

By the nineteenth century, Irish cities were radically changing again. Firstly, by the Act of Union in 1801, which took away the need for the affluent and the influential to maintain their town houses, especially in Dublin, and to repair to London where the seat of government now resided, and secondly by famine. In one case, the Moira House on Usher’s Island in Dublin, which had been a literary and political sanctuary under the patronage of the Countess in the late 1700s, became the Mendicity Institution in 1820 (241-47). Dublin was never to recover architecturally, and the buildings that came after were never as grand as those such as the Customs House or the Four Courts. Fortunately, there was a spread of skills in the technical sphere as artisanal people had to move onwards and outwards. Woollen weavers from Dublin and Cork were recruited to Mexico where they formed the basis of a royal manufactory. Waterford tanners settled in the Basque country, while mezzotint engravers brought their techniques to London; Irish wallpaper manufacturers could be found in Bordeaux and Philadelphia; silk weavers and dyers moved to England. Training in the Dublin Society schools of design and architecture had far reaching influence such as James O’Donnell’s New York brick houses, and the gridiron street scheme that distinguishes many older North American cities, but which originated in Limerick (253).

Events over the last decade have made us re-evaluate our cities. Recessions, Celtic Tigers, Brexit, and COVID have all had profound consequences on city life and affected the way we live in, or away from, them. The race to urban centres after the famine is only reflected in the exodus to the country when we could work from home. The 5km limit imposed in the early stages of the COVID pandemic either kept us within the city limits or alienated us from the city for nearly eighteen months. Personally, locked-down in Cork City with a job that eventually petered out, left me with time to roam deserted streets and harbour walls and appreciate the laneways and foodways that have made Cork a city of food. During a couple of months in the Liberties while I awaited the arrival of my first grandchild, I immersed myself in reading as much as I could about Dublin City. In conjunction with other publications – I am thinking in particular of Peter Sirr’s Intimate City: Dublin Essays and The Coastal Atlas of Ireland, edited by Robert Devoy – David Dickson’s overview of Irish urban development in The First Irish Cities has been a very valuable and intriguing resource that answered many questions and gave satisfying explanations.