by Eileen O’Carroll. This text may be archived and redistributed both in electronic form and in hard copy, provided that the author and journal are properly cited and no fee is charged for access. 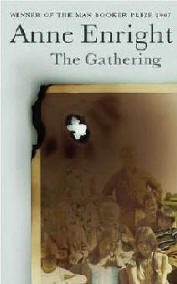 Members of large families scarcely recognize the story of  their lives as told individually by their siblings: each family member will have lived a life entirely different except for maybe a brother or sister very close in age. Veronica Hegarty and her brother Liam were born only eleven months apart. «Sometimes I think we overlapped in there, he just left early, to wait outside.» This closeness (in what is assumed to be a ‘close’ family), along with a genealogy of sex and emotion, is at the kernel of The Gathering.

The pain of the loss of her brother and her boiling rage at what led to his suicide drive Veronica a little mad herself. She lives oppositely to her husband and children, sleeping by day and doing her actual living at night. Her ‘vague’ mother is blamed for much, but Veronica’s descent into her own kind of vagueness is almost like a genetic imprint. Anne Enright’s main character mirrors much of what is distasteful about the newly rich Irish and is not very likeable when ruminating on property or the trappings of the beneficiaries of economic boom.

Sometimes  you  feel  like  shouting  «Cop on to yourself woman, yourself and your Saab!», much as one of her less loving siblings might, but Enright’s bleak humour lets Veronica off the hook. Veronica is too canny and possesses too great a sense of the ridiculous to fully endorse her own lifestyle, and Enright manages to express what a great many of her generation feel about having struck their own seam of gold: this too will pass.

Behind the story of a sister dealing with a beloved brother’s suicide is a conjectured version of what led to that final act. This story is imagined by Veronica to begin with her maternal grandmother, Ada, and the connections she made in her voluptuous youth. The Dublin of the 1920s is wonderfully imagined, and is depicted through silences and inevitable interruptions. Imagine a time when a man could recognize the sound of a friend’s approaching car in the centre of Dublin city, only to have it driven away in the opposite direction: «Nugent cocks an ear after the escaping motor. There is a pause as the engine fades, and then the silence starts to spread. It seeps into the foyer of the Belvedere; the distant rustle of streets turning over from day into evening, as the night deepens and the drinking begins – elsewhere.» Reading the account of Ada’s first meeting with Nugent is like being one of a group held hostage: tension and fear stalk you, and every tick of the clock seems to hasten an inevitable tragedy, the victim of which is as yet unknown.

Anne Enright’s descriptions of happenings from childhood are translations of child-life, both funny and intensely scary. When Liam, Kitty and Veronica trespass in the bus station Veronica is caught by a busman on top of a double decker: » … inside there was the sound of a man on the stairs, and the sight of his hand on the chrome rail as he hauled himself up, step by step, his torso finally rising out of the stairwell like an expanding balloon. …  He walked this stomach down the aisle at me, as I backed away, until I was tripped into sitting by the back seat of the bus. Then he pushed it at me – and even though I doubt all this can be strictly true, I do remember the surprising tautness and bounce of it, as he jabbed at my face with its leading white button…» Such episodes recall her 2004 work of non-fiction, Making Babies; Enright’s meditations on children and their particular logics have added hugely to her portrayal of the child mind in The Gathering. These are some of the most amazingly written parts of the book, the whole of which is a exercise in the catching of thoughts before they recede to unconsciousness.

As an entity the Hegartys are a durable, stout-hearted lot («The Hegartys didn’t start kissing until the late eighties and even then we stuck to Christmas.»), as fine an Irish family as you will get, but they are of course soaked with individual failings and petty competitiveness. The ‘gathering’ is Liam’s wake, a set-piece with its list of types (another alcoholic, the sane one, a lapsed priest etc), bitchiness, the need for drink and the unavoidable merriment. ‘Truth’ is in the air, but is sidestepped where possible. Veronica still connects with Liam and adopts his mannerisms and partly fulfils his role, while his body lies in the other room. Sex and death commingle but at the funeral a surprise redemption is issued forth.

A deserving winner of the 2007 Man Booker Prize, Anne Enright has gone to the dark core of the family and has revelled in it.