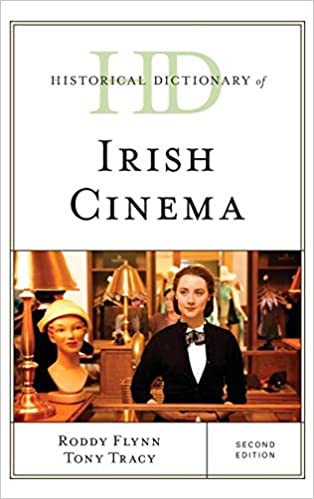 The first edition of this book was published in 2007 by Scarecrow and written by Roddy Flynn and Patrick Brereton. Whilst the original edition was 393 pages long, this second edition is 657 pages long which reflects the significant amount of additional material in the text. The Historical Dictionary of Irish Cinema (THDIC) is now published as part of Rowman and Littlefield’s fascinatingly eclectic “Historical Dictionaries of Literature and Arts” series of reference texts. Tony Tracy and Roddy Flynn’s tome provides the reader with a wider range of entries and references than its previous incarnation whilst also updating existing entries. As the authors note in their preface, “this second edition … is effectively a new book. It is twice as long, and virtually all of the original entries have been substantially revised or rewritten” (xi). The authors argue for the relevance of the work in the age of the Internet Movie Database and Wikipedia by stating their belief that their dictionary can compile academic knowledge “between two covers in a way databases cannot” (xi).

In their introductory remarks the authors discuss the self-imposed limits they placed on the work regarding what the notion of an “Irish Cinema” actually means within the confines of this dictionary. Tracy and Flynn argue that their choices are “influenced by a common sense definition of a film text: live action, structured by narrative, feature length and intended for big screen exhibition” (ibid). They do not necessarily stick to these definitions; their “common sense” definition therefore still includes entries on some documentary films and documentarians. They also include entries on long discussed American and British productions which often have more substantial entries than some   twenty-first-century Irish films. This tendency has become a fixture of the study of Irish cinema from Rockett, Gibbons and Hill’s seminal Cinema and Ireland (1987), to McLoone’s excellent Irish Film: The Emergence of a Contemporary Cinema (2000) and Lance Pettit’s Screening Ireland (2000). The reason for this relates to a relative absence of production in Ireland until the 1970s and 1980s and the consequences of this are eloquently described by Ruth Barton in the essential Irish National Cinema: “if we are to talk of a national cinema … we have to engage in a series of acts of creative bricolage; that is, to see how an image of Ireland on screen emerged out of the national industries of other countries” (4). The authors follow Rockett’s premise in his compilation of The Irish Filmography and engage in similar acts of bricolage in defining what still constitutes an “Irish” film when they include entries on Far and Away (Ron Howard, USA, 1992) or Yves Boisset’s 1977 French film The Purple Taxi. The debate over what constitutes an Irish film is far from over. Ruth Barton recently introduced her new book, also reviewed in this issue, with a similar discussion about the merits of Yorgos Lanthimos’s The Lobster as an Irish film (1-3). Tracy and Flynn argue that their “broader definition includes mainly American and British pictures that have defined the acceptable limits of how things Irish may be represented” (xi). The authors also recognise that their text is a “mosaic” which is “partial and imperfect” (ibid).

The second edition of The Historical Dictionary of Irish Cinema is easily the most comprehensive and accessible work of reference within the discipline, even if Kevin Rockett’s almost 800 page long The Irish Filmography: Fiction Films 1896-1996 still retains excellent research value for its scope and detail. THDIC is aimed at a variety of readers but it will be most useful as a work of reference for researchers, undergraduates or even postgraduates approaching the subject for the first time. Apart from the dictionary section, the features of the book include an introductory essay (which will serve as a great introduction to the field for undergraduates), a chronology of relevant events, and a wide ranging bibliography that provides information on many publications within the field. The dictionary entries are broad and varied serving as introductory overviews and including sections on major actors, production and distribution companies, film festivals, cinemas, and filmmaking initiatives and legislation. This edition includes updated and new sections on contemporary filmmakers such as Lenny Abrahamson and John Carney, actors such as Michael Fassbender, Orla Brady, Amy Huberman and Saoirse Ronan, and more recent films such as Zonad (John Carney, 2009), A Date For Mad Mary (Darren Thornton, 2016), and Handsome Devil (John Butler, 2017). An expanded section has also been provided to the burgeoning Irish animation sector and the international successes of the production companies Brown Bag and Cartoon Saloon.   The book is particularly useful when discussing areas relating to industrial legislation, filmmaking initiatives, and Irish and European policy with regard to film production. This is reflected in highly informed entries on Filmbase, the Irish Film Board (now Screen Ireland), the Irish Film Institute, and industrial policy such as the Creative Capital report and Creative Europe. Tracy and Flynn also offer brief critical appraisals of many of the film entries

Some interesting people and films have been left out of the book or are not provided with a dedicated entry. For example, although her film Hush a Bye Baby is present, one of Ireland’s most important feminist filmmakers, Margo Harkin, is not provided with a dedicated entry although she was deemed worthy of a section in the Wallflower Guide to Contemporary British and Irish Film Directors (2001).   Whilst it is true that much of Harkin’s work was in television documentary, this is no less true of filmmaker Alan Gilsenan who is provided with a 2 ½ page entry in the book. Margo Harkin was also a producer on Joel Conroy’s exhilarating narrative driven and highly cinematic surf documentary Waveriders (2008) which does not have an entry in the book. Waveriders was supported by the Irish Film Board and N.I. Screen and is amongst the most successful Irish cinema releases over the last 20 years (Boyd, 2014, 2018).

THDIC is highly comprehensive but the willingness by the authors to broaden the subject matter to provide entries to films such as Braveheart (Mel Gibson, 1995), Captain Lightfoot (Douglas Sirk, 1955), or Barry Lyndon (Stanley Kubrick, 1975) may have resulted in slightly less focus on contemporary Irish films. As Michael Patrick Gillespie argues this kind of focus may ultimately contribute to the myth of a “unitary” Irish cinema (xi -xii) rather than offering a tangible analysis of something culturally “Irish”. As a result some contemporary films go unmentioned or are not provided with a full entry, for example, The Honeymooners (Karl Golden, 2003), Get Up and Go (Brendan Grant, 2014), The Truth Commissioner (Declan Recks, 2016), The Lodgers (Brian O’Malley, 2017), The Hardy Bucks Movie (Mike Cockayne, 2013), Sing Street (John Carney, 2016), and Yann Delague’s Troubles film ’71 (UK, 2014). Also absent is the cult curiosity martial arts film Fatal Deviation (Simon Linscheid, 1998) which is clearly a cinematic film even if it never gained a theatrical release. It could be asked why other British or American films are not included, for example, The Devils Own (Alan J. Pakula, 1997) or Fifty Dead Men Walking (Kari Skogland, 2008), or why a film such as Young Cassidy (John Ford, Jack Cardiff, 1965) should not have its own entry. Irish produced films could now sustain a dictionary such as this regardless of their perceived quality or value.

The authors include a number of Northern Irish films such as Good Vibrations (Barros D’Sa, Leyburn, 2013) as part of their “Irish Cinema” without providing a critical context as to how or why or how these films should be regarded as “Irish” or how differently they may be regarded by audiences in both territories. Brian McIlroy noted the importance of these critical contexts almost twenty years ago when he discussed how Northern Ireland’s identity is often forgotten within definitions of Irish cinema (17-41). There is an entry on NI Screen but no clarifying entry on Northern Ireland and its relationship with the cinema. Again, it is unclear why some Northern Irish films have been selected over others.

This book is steeped in the collected knowledge of academic works in the field. One of the curious aspects of Irish cinema is the disparity between the relatively small cinematic output of the nation and how comprehensively the field has been studied. Tracy and Flynn’s dictionary reflects this comprehensive work and comprises the accumulated research of academics such as Kevin Rockett, Ruth Barton, Luke Gibbons, Harvey O’Brien, and Diog O’Connell, amongst others.

The knowledge presented here, as well as by Ruth Barton in her recent book, is so complete that it could almost be regarded as an intellectual endpoint to the study of the current phase of Irish cinema. As the authors note in their introduction, Irish cinema has become transnational in form (9-12). The era of an Irish National Cinema that involved a nation communicating with itself through the popular form of cinema has passed, if it ever truly existed. Much of what we think of as Irish cinema has become part of global and transnational systems of production. This calls attention to the field of study itself. There are unexplored areas within Irish film studies and these must now be developed in order to progress the discipline.

The Historical Dictionary of Irish Cinema is an excellent contribution to the field by two of the most active scholars in the area of Irish film and media studies. As Barton points out in Irish Cinema in the Twenty-first Century (20), Tony Tracy and Roddy Flynn’s annual “Year in Review” of Irish cinema in Estudios Irlandeses is one of the few places in which contemporary Irish cinema is still critically catalogued and it is an important resource within the field. This knowledge and experience has allowed the authors to produce one of the most informed and authoritative reference texts on the subject. This book significantly improves on its predecessor and it will enrich the study of Irish cinema whilst benefiting anyone with an even casual interest in the field.