by Craig Simpson. This text may be archived and redistributed both in electronic form and in hard copy, provided that the author and journal are properly cited and no fee is charged for access. 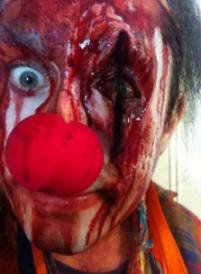 The second feature film from Irish director Conor McMahon (who made his promising feature length debut in 2004 with Dead Meat) deals with that horror staple: fear of clowns.  Or, to give it its medical title: Coulrophobia. While some suggest this fear arose from negative experiences we may have had as children with these apparently harmless figures of fun (and indeed that’s where Stitchesseems to land on this), popular culture has embraced the clown as something that manages to stoke our deepest, darkest fears.  In music, bands like Slipknot and Insane Clown Posse have cultivated their image based on this theme while Stephen King did for clowns what Peter Benchley did for sharks with the publication of his novel It (1986) − later made into a TV film(1990).  It was King who set the benchmark for all contemporary malevolent clown incarnations with It’s Pennywise: a sadistic inter-dimensional predator who terrorises a group of children by preying on their individual phobias.

In American cinema, B-movies like Blood Harvest (1987) and Killer Clowns From Outer Space (1988) have attempted, in ways that were often tongue in cheek and camp, to add to this growing mythology of the ‘evil clown’.  Even in the real world the figure of the clown became synonymous with evil after it emerged that the serial killer John Wayne Gacy worked as a children’s clown at charity events and children’s parties.

Stitches therefore enters into an established horror sub-genre but, unfortunately, seems to have little to add to it. McMahon’s film recycles a whole set of horror tropes without originality or ingenuity and overall is a disappointing effort that fails to deliver on the early promise of his debut zombie featureDead Meat.

The plot of Stitches could not be simpler. A child’s party in what appears to be a contemporary house in rural Ireland goes horribly wrong when the drunken, cigarette smoking clown ‘Stitches’ (played by popular English comedian Ross Noble) manages to fall face first onto a protruding knife from perhaps that most banal of middle class appliances, the dish washer. In an effect that is used extensively throughout the film, blood sprays in jets all over the face of protagonist Tom (played by young English actor Tommy Knight) thereby establishing the films ‘traumatic event’ and serving as the reason for Stitches’ vengeful return from the grave.

A transition introduces us to the kids ‘6 years later’, now all teenagers in the full pangs of puberty, a distance in time unsubtly rammed home by a match-cut involving a squeezed zit and a cracked egg (you get the idea). From here, Stitches takes the standard route of most teenage horror films by establishing the group’s hierarchy with the stereotypes that we expect: ‘the stoner’, ‘the horny jock’, ‘the promiscuous girl’,  ‘the nice but geeky protagonist’ and so on.  Every box is ticked by McMahon but without any real cleverness or deftness of touch. Borrowing heavily from American teen films like Mean Girls and TV shows like Glee we even have a camp figure in Tom’s friend ‘Bulger’ (Thomas Kane Byrne) though this never amounts to more than cheap mimicry of a ‘gay’ screen stereotype.

Stitches then begins to work through scenes that ‘homage’ successful horror films but without adding anything original or remotely clever. The classroom dream sequence for instance − in which Tom’s teacher in clown make up tears off a pupil’s genitals and ties them to a balloon, invokes Wes Craven’s Nightmare on Elm Street − is neither shocking or disturbing, but rather (unintentionally) comical.  Another scene in the gym echoes De Palma’s Carrie, complete with tracking camera shot, all of which only serve to illustrate that while McMahon is clearly well versed in the classic horror cannon merely quoting his favourite films is not enough to hold a film like Stitches together.

Indeed this non-descript referencing of American classics of the genre points up one of the films central problems  —   a lack of clearly defined place or indeed any sense of real ‘Irish-ness’, something that made his earlier Leitrim-set feature Dead Meat so entertaining and original. While the setting in Stitches appears to be a generic country town in Ireland, there are regional dialects in the ‘community school’ (ranging from ‘north-side’ to ‘D4’) that seem out of place, while Tom (who seems to be channeling a teenage Hugh Grant) speaks with a posh English accent, which is never really explained. While there is nothing wrong with this cosmopolitanism on the surface here it seems hastily cobbled together and comes across as unrealistic and forced. Even the music and slang used by the characters seems outdated and suggests that some kind of research into the average life of the contemporary Irish teenager may have helped with what is overall a poor script from writers Conor McMahon and David O’Brien.

Once the figure of a resurrected ‘Stitches’ arrives at a second party organised in Tom’s house (a kind of reunion of all those who had been at the original) things get very silly, very fast. Noble makes a game effort as the sneering villain but the script only gives him one-liners that aren’t really bad enough to be good (this was one of the major appeals of Freddy Krueger in The Nightmare on Elm Street series) while the FX for the ‘death scenes’, including the aforementioned jets of spraying blood, are wildly over-used.  One of the films more memorable images is the sight of Stitches chasing Tom and his love interest Kate (Gemma-Leah Devereux) on a mini tricycle into a grave yard but by this stage the film has petered out, culminating in a crescendo of gore for Stitches’ own messy, predictable demise.

This ‘creature feature’ from Belfast-born director Jon Wright will instantly remind many aficionados of the American comedy-horror classic Tremors (1990).  Successfully mixing  ‘buddy film’ tropes with those of comedy, sci-fi and horror, Tremors set the benchmark for this genre, particularly in its use of fast paced action scenes and social commentary. We find such elements transferred to an Irish context in Grabbers, producing a highly entertaining piece of genre filmmaking (it even has 1950s sci-fi ‘fades’ between scenes) that also manages to poke fun at a whole number of Irish cinematic stereotypes.

After opening with an attack on a fishing boat by a tenticled monster we cut to a panoramic shot of Ireland’s beautiful coastline (accompanied by a ‘twee’ musical score) that would make the Irish Tourist Board proud.  Borrowing from Spielberg’s Jaws, Grabbers sets out to establish that this pastoral sleepy town will soon have its peaceful façade breached by an unknown enemy. After a number of dead whales wash up on the beach (another Jaws reference?) and a number of locals are attacked and killed it soon becomes clear that there is something dangerous lurking offshore.

Grabbers is self-consciously parodic, allowing for some humorous send-ups of parochial stereotypes. When one local is asked by investigating Garda Lisa (Ruth Bradley) if she knew a storm was coming because the  ‘seagulls were flying low’ she remarks ‘no, I saw it on the telly’. Another good example of Grabbers’ socially-attuned script is a scene where Lisa admonishes alcoholic colleague Ciaran (Richard Coyle) for his drinking. After offering up the standard defense by saying he is just ‘a social drinker’ she sarcastically replies ‘sure you are’. While some might argue that the central premise of the film − that the monster won’t attack the community if everybody’s drunk − only exacerbates ‘paddywhackery’, I think there is enough in Grabber’s to see it rather as clever b-movie inspired satire on our own perceptions of drinking culture and idealizing of rural community.

Ultimately, Grabbers signals something much healthier on the horizon for Irish horror. UnlikeStitches, it manages to transcend over-familiar genre conventions by smuggling in some social commentary and giving the viewer a real sense of place in terms of its Irish setting.  This lends it an identity and originality all of its own, something much Irish horror fare has sorely lacked over the last decade. While there have been some genuine attempts during this period at giving Irish horror its own voice (Isolation, Dead Meat) too many of the films in the genre (Boy Eats Girl, Shrooms) cannot escape the shadow of their far more successful American counterparts. 2012 also saw the release of ‘found footage’ horror The Inside but, as is often the case with Irish film, we seemed to have jumped on a bandwagon that’s already showing signs of exhaustion.

One of the most appealing aspects of making horror films, for emergent film-makers is that they can be made on a shoestring budget and still retain a certain degree of quality (see the recent Monsterand the Paranormal Activity franchise in America). But by and large the industry in Ireland needs original ideas and scripts with a greater consistency in order for that horror films to become successful overseas. Finding our own identity in this genre will be a major challenge; yet, asGrabbers demonstrates, it would be premature to see this as an unreachable goal.