The Infinities by John Banville

The Infinities by John Banville

by Joakim Wrethed. This text may be archived and redistributed both in electronic form and in hard copy, provided that the author and journal are properly cited and no fee is charged for access. 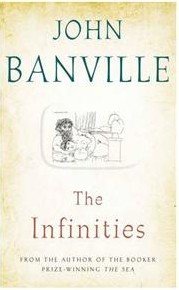 Picture this: A rather spacious house. A dying scientist trying to hold on to melancholy-tinged memories of the life that slowly seems to be slipping through his fingers. A couple of outlandish characters. A handful of not so outlandish characters. A bizarre sense of dark humour, lurking as a ghost in the text. Erudite allusions scattered here and there. All of the above is conveyed to us in a brilliantly crafted prose, with an occasionally almost more than poetic intensity. If we picture this, we know for certain that we are in Banville-land. With The Infinities, John Banville publishes his first novel since the successful Man Booker Prize winning The Sea (2005). In the time between the novels, the author has entered the realm of crime fiction, half-heartedly hidden behind the pen-name/persona Benjamin Black. According to Banville’s own comment on the distinction between these two author-selves, Black writes swiftly and Banville slowly. This may perhaps be applied to us readers as well. The construction “swift Banville reader” is in itself a conceptual violation, which I shall comment on below.

But if we initially stick to the contrast between the last two novels of Banville’s long and triumphant career as a writer, an interesting aspect of his maturation may be revealed. In The Sea, the narration is centred on the experiences of the protagonist Max Morden (male first person narrators, or third person narrators with the point of view of male characters, dominate the oeuvre). In The Infinities, the manner of narration is slightly different. Here, the point of view emanates from the Gods (the voice of Hermes) and is therefore more mobile, not restricted to the mind of old Adam, the dying scientist. We are allowed to float from young Adam (the son) to his wife Helen, to the sad, self-harming daughterPetra, to old Adam’s wife Ursula, and even into the mysterious structures of canine cognition through the family dog Rex. The overall effect of this mobility is partly comical, zooming in on human predicaments from the outside, as it were, which of course raises the ancient question: What is the meaning of it all? The human tragedy presented almost as a practical joke. By introducing this type of narration, Banville achieves two things. Firstly, novelty in terms of possibilities, which, among other things, entails that a great deal of textual space is given to the female characters. Secondly, he maintains faithfulness to his central obsessions as a writer: science, language, reason, the oddity of the ordinary, the intricacies of memory processes, the complexity of perceptual patterns, the mystery of otherness, etc. From a scholarly perspective, this is no mere happenstance. The Banvillean authorship is more than a collection of narratives labelled with that author’s name. There is obviously a master plan (speaking of Gods) behind the differences and samenesses of all his writing. The recycling of names and characters is beginning to reveal a more or less coherent picture.

Already in his début collection of short stories, Long Lankin (1970), there is a story called “Sanctuary” in which we have two female characters, one named Julie and the other Helen (eponymous to young Adam’s wife in The Infinities, which certainly is not a haphazard fact in Banville-land). Furthermore, the two characters are alone in a house when a young man arrives, who obviously is Helen’s lover. The relation between the two female characters is never clearly articulated, more than that they seem to live together and that Helen used to be Julie’s teacher. The short story’s suspense-energy is derived from all that is not said. In The Infinities, we also encounter strange arrivals to the house, particularly that of the Pan-like Benny Grace (one of the more outlandish characters), old Adam’s former colleague, who turns up and stirs the same kind of curiosity-mingled fear in Petra as the young, red-haired man did in Julie in “Sanctuary”. What I am getting at here is some kind of repetitive scheme, which (in typical Banville fashion) is a holding-on and letting-go at the same time. In the early short story we read about Julie:

In the bedroom she lay with her hands folded on her breast and listened to their voices. Once they laughed, and in a while all was silence. She watched the reflections of the water above her on the ceiling. They seemed to have but one pattern which constantly formed, dissolved, and reformed again. A small wind came in from the sea and murmured against the window, and the curtains moved with a small scraping sound. (my emphasis)

The names of characters are both important and irrelevant. Sometimes a name is recycled in a new possible world, sometimes there is a new name, but very similar characteristics and experiences prevail. In Julie’s perception above there is sameness, “one pattern”, but also difference within this sameness, since it “formed, dissolved, and reformed”. In The Infinities, Helen and Roddy Wagstaff are engrossed in a conversation at the faintly lugubrious dinner:

They are conscious of the summer day outside, its soft air and vapoury light . . . . A breeze comes in from the garden and the curtain of white gauze before the open half of the french doors bellies into the room like a soundless exclamation and listlessly falls back.

Humans (characters) come and go in the oeuvre, but the sameness in difference of air, light, rain and weather, billows, dissolves, forms and reforms in intricate perceptual patterns. In the new novel, this kaleidoscopical Banvillean concern is explored from a slightly different perspective. The personification of the Gods, i.e. the fleshing out of the spirit, is a novel way of stretching a dominant and persistent Banvillean preoccupation, which has been there from the start. It is here we may witness the strength of Banville’s writing. How he repeatedly finds new variations of this primary textual matter. It also sheds light on the impossibility of reading his novels swiftly. If the reader does not let herself be pulled into the beauty of the seemingly irrelevant, then most of the reading experience is lost. To actually read Banville is a laborious task.

Even though The Infinities must be regarded as a tour de force — especially considering the fact that it is probably not a trivial business for a writer to know exactly how to proceed after having won the Man Booker — I would still hesitate to shower the novel with praise, and dub it the crown of Banville’s production. I know how to read it and appreciate it as a scholar, but I wonder how Black-readers would read it. I am still waiting for something similar to The Book of Evidence, since I think that Banville in that work brilliantly combined his poetic intensity and philosophic ruminations with a plot-driven energy, which makes it a true literary masterpiece.

The most prominent strengths of The Infinities are the beautiful wordings, which repeatedly astonish even the most fastidious reader, and Banville’s ability to find a viable literary form for the possible world concept. The real–unreal dichotomy is traversed seemingly with ease time and time again. There are other worlds, but they appear in this one. There is sameness in difference. The novel pays homage to the beauty of misery and perhaps we never get closer to life itself than in the form of that oxymoron-like word formation. Banville successfully utilises a chiasmatic rendering of the statement: “For what is spirit in this world may be flesh in another”. Like great thinkers and artists, who have managed to make human life less boring and predictable, Banville knows, and (hopefully) persuades his readers into knowing, that the “real” world is always already metaphysical and vice versa. This may be shocking to some and consoling to others. To be sure, in the intellectual atmosphere of our times it almost comes out as a provocative political statement.