The Irish Buddhist: The Forgotten Monk Who Faced down the British Empire

The Irish Buddhist: The Forgotten Monk Who Faced down the British Empire

by Brendan McNamara. This text may be archived and redistributed both in electronic form and in hard copy, provided that the author and journal are properly cited and no fee is charged for access. 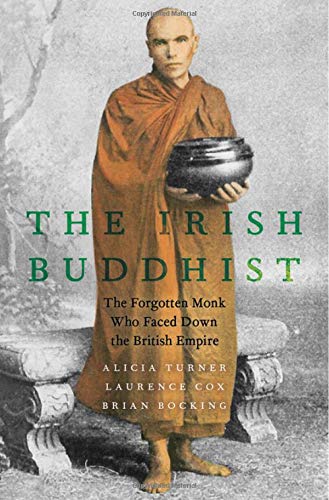 This is an extraordinary story deftly told, the fruit of ten years’ work by three distinguished scholars. It succeeds in being a triumph of innovative investigation as well as an academic history of real quality. U Dhammaloka is the forgotten, fully-fledged, Irish Buddhist monk who made a notable contribution to Buddhist revival in Burma (Myanmar) and surrounding countries at the turn of the twentieth century. He was probably the first Westerner to be so ordained (136). Feted and celebrated wherever he went, Dhammaloka built an international reputation for his work, promoting education and countering Christian missionary efforts amongst Buddhists. Given the intersection of Christian missionism and the colonial enterprise, it is no wonder he drew the ire of the authorities, especially since he took delight in exposing the wrongdoings of the ruling class. He was at one time described as “a terror to evil-doers” (1), employing a “three-part critique of the missionary (the Bible), the problems of alcohol (the bottle) and the British military presence (the Gattling gun)” (5). Such was the vehemence and effectiveness of his preaching that he found himself in January 1911 before the Chief Court in Rangoon appealing against a conviction of seditious libel handed down in a lower court. The courtroom drama introduces us to the enigmatic Dhammaloka in the opening chapter of the book and is reprised at the conclusion to draw the curtain down on this fascinating treatment.

Dhammaloka’s early life is shrouded in mystery. Hailing from a working class background in Dublin, he had little formal education and spent his early adulthood as a “hobo” in the United States. A sometime sailor and “self-educated radical” (9), he fetched up amongst “poor white” beachcombers in Burma, where he was attracted to Buddhism and eventually took higher ordination as a monk in the year 1900. He considered the public rejection of Christian missionaries as chief amongst his priestly duties, while abjuring racial boundaries propagated by colonialism. Dhammaloka employed a deep knowledge of the Bible to rail against the hypocrisy of the missionaries, propagating a religion of “peace” while fully supporting colonial over-lordship. He castigated Christian teaching as unscientific and backward when juxtaposed against his Buddhist atheism and “freethinking”. These arguments were bluntly and directly advanced by the bhikkhu in countless addresses delivered to large audiences across Burma, Ceylon (Sri Lanka), Singapore, Indonesia Thailand and India. (He also made forays into Japan and Australia but to less acclaim).

Adept at attracting publicity for his efforts – indeed a skilled self-publicist – he circulated his views widely through the agency of his Buddhist Tract Society which published thousands of pamphlets (not all penned by himself) which went round the world. His influence was such that the great Buddhist modernist, Angarika Dharmapala, enlisted his support in effort to re-invigorate what he considered moribund practice amongst Buddhists in Ceylon. In 1909, Dharmapala funded a speaking tour for Dhammaloka, travelling with him across the country. Addressing audiences of hundreds, and in some instances thousands, Dhammaloka spoke at over forty-eight separate engagements. Titles of his talks included, “What has Christianity Done to the World?” the “Falsity of Christianity”, and “Slavery under Christianity” (201-4). More is known of his travels in Ceylon than earlier tours in neighbouring countries but it is clear that he received a similar warm reception wherever he went throughout his missionary career, especially from working class people.

His popularity as a speaker and his lampooning of Christianity were not the only reasons for his fame. In close collaboration with those who underwrote his work in promoting Buddhism, he became a champion of education and was instrumental in the founding of schools in a number of countries. Dhammaloka is undoubtedly a figure of importance in the history of modern Buddhism, its articulation both in the East and its migration to the West. That he is mostly forgotten is complex and perhaps one of the most intriguing aspects of an altogether intriguing story.

At all turns during his eventful public life, and as per the title of the book, Dhammaloka’s Irishness is particularly remarked. Honorifics ascribed to him include “priest”, “reverend”, and even “Lord Abbot” (107), but he is almost always referred to in newspapers and reports as “the Irish Buddhist”. Deployed by his detractors, the ethnic qualifier may have been an effort to demean, as in who could possibly take an “Irish” Buddhist seriously. His supporters may have wished to highlight his nationality to reflect how rare and remarkable it was that a white European could rise to such prominence in service to an “Eastern” religion. Whatever the reasons, the ubiquity of the descriptor does tend to oppose Dhammaloka’s missionary and anti-colonial work against the significant influence of Irishmen within the colonial civil service where many were employed at all levels. For a brief period, the Chief Commissioner of Burma (1889-1890) was the eminent Sir Antony MacDonnell, a Catholic and sometime Irish nationalist from Mayo. Other less prominent figures from the home-country populated the various echelons of control. In effect, Dhammaloka was a foil to those Irishmen who were involved in running the colony on behalf of the British. Dhammaloka’s radical oppositional activism was very much a minority position (at least in this period) when it came to Ireland’s involvement in Empire. This juxtaposition of Irishness and Empire reached a climacteric when Dhammaloka, the Irish Buddhist, appeared in January 1911 before Chief Court Judge, Daniel Twomey, one of Burma’s best-known judges and a native of Carrigtwohill, Co. Cork. Dismissing his appeal, Twomey sided with the Crown prosecutor, seeing in his fellow countryman a dangerous and effective agitator, if uncouth and uneducated. The occasion presents as a tableau vivant encapsulating all the fascinating intersections of race, religion, and identity represented in this complex drama.

Given that most of Dhammaloka’s “output” was delivered during appearances at mass meetings (and in his contributions to tracts and newspapers), the content of his presentations, how he spoke, indeed how he sounded when delivering his plebeian down-to-earth discourse, are of real interest. His legacy depends on fragments (there are no books or diaries) and he has left few literary traces. Though criticised (by a detractor) for being a “vulgar and unstable character” (289), and by another as endowed with the gift of the “gab” (213), the “Buddhist celebrity” (69) proved a very popular orator amongst the Buddhist and non-Buddhist populations of Burma and neighbouring countries. The authors have rightly taken the decision to translate into readable English the exaggerated “stage-Irish” rendition of published interviews. If the caricature has been elided we might still imagine Dhammaloka declaiming in a distinctive “Hiberno-English” accent. That he shrouded his pre-Buddhist life in mystery (O’Rourke, Colvin or O’Carroll?) further piques our curiosity. In his time, many Irish people moved chameleon-like through the intersections of race, religion, and empire, appearing in different guises with different affinities and mixed loyalties, but for the most part in service to the colonial overlord. Dhammaloka’s is a unique case of an Irish person “constructing” a new identity abroad.

Thomas Tweed makes the point that “plenty of working class men and women without formal education did plenty of thinking” for which records are scant and their influence left un-appraised. He suggests the term “vernacular intellectualism” to characterise “rationalist freethinkers and itinerant labourers” (284) like Dhammaloka, in some cases people renown in their own lifetime. The authors in their summation coin the phrase “a plebeian cosmopolitanism” to locate his contribution against the usual “literary, intellectual, or middle-class” types associated with the Buddhist revival (247). Not simply celebrating another “white hero”, they argue cogently, Dhammaloka crossed boundaries and disrupted hierarchies and was instrumental in facilitating local agency. Considered alongside political developments concerned with the unwinding of the colonial enterprise (when Burmese nationalist efforts no longer had utility for an Irish Buddhist icon), it is all the more remarkable that we have here such a rounded appreciation of his life and work.

One final point of note concerns how we might locate Dhammaloka within the context of the history of religions in Ireland, particularly as the subject of religions in the pre-independence period has been little examined. Most histories of the era focus on Catholic or Protestant concerns from a confessional perspective. If Christianity in America and Europe garnered some attention, very little work has been produced on connections to other religious traditions of the world, and then only with respect to how they relate to Christianity. But this was not always the case. Recent research highlights the interactions of Irish people and religions outside of Christianity as a result of involvement with empire and, as with Dhammaloka and Buddhism, taking leading roles. Shackle and Bocking (2013) list several Irish figures besides Dhammaloka who made significant contributions in the area of religious activism or studies in Asia during this period, most of whom are now obscure. They include Max Arthur Macauliffe for Sikhism, Charles Pfoundes for Buddhism, Margaret Noble (Sister Nivedita) for Hinduism, and Annie Besant, John Bowles Daly, Charles Johnson, and Margaret and James Cousins for Indian/Sri Lankan Theosophy. Two other figures of substance who remained in Ireland, they note, were the Bahá’í writer, George Townshend, and Mir Aulad Ali, the nineteenth-century Dublin orientalist who taught in Trinity College for many years and was a well-known figure in Dublin in his day. Perhaps Dhammaloka studies, so ably given life by Alicia Turner, Laurence Cox, and Brian Bocking, can be seen as the begetter of a new and wider genre within the study of religions in Ireland. Their contribution here is unique and to be celebrated.

Shackle, Christopher and Brian Bocking. “Representing Sikhism: Essays in Memory of the Irish Scholar Max Arthur Macauliffe.” The Journal of the Irish Society for the Academic Study of Religions, 4 (2017): 1-6.