by Patricia Trainor. This text may be archived and redistributed both in electronic form and in hard copy, provided that the author and journal are properly cited and no fee is charged for access. 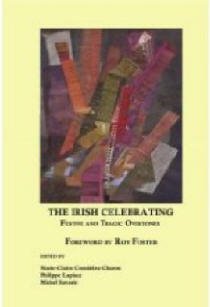 The Irish Celebrating: Festive and Tragic Overtones comprises a number of carefully selected papers which were presented at the 25thInternational Annual Conference of the French Society of Irish Studies at the University of Franche-Comté in Besançon, 24th-25th March 2006. The theme of the conference was “Ireland: the festive and the tragic.” The book has a total of twenty-five chapters and is divided into four main sections: (1) Historical and Popular Manifestations (2) Literary Illustrations (3) Social and Institutional Issues (4) Northern Perspectives. In an insightful Foreword Roy Foster sets the mood by making reference to a passage in William Carleton’s Traits and Stories of the Irish Peasantry in which he states “that in Irish life occasions of celebration ─a fair, a dance, funeral or wedding ─ coincide with the chance of getting one’s head or bones broken, and much stranger, he declares that these events are warmly and sentimentally remembered.”

Foster notes that for social and cultural historians, the idea of celebration is hard to detach from that of memory and it is fitting therefore that Section 1 of the book begins with Verónique Guibert de la Vaissière’s inquiry into four pre-Christian festivals, Imbolc, Bealtaine, Lughnasa and Samhain, which celebrated the turning of the wheel of time and acted as arks of alliance between men and the Invisible. Ludivine Bouhelier then reminds us that, after Ireland gained its independence, the new nation state recognised the need to preserve these traditional festivals and customs as a link to the past for future generations. Another way of remembering is by erecting monuments to historical figures and heroes and Paula Murphy’s article concentrates on the imperial and nationalist public monuments erected in Dublin in the 19th and early 20th century where she contrasts among others, the statues put up almost side by side of Admiral Nelson and Charles Stewart Parnell. The former was attended by an official military display of British power and authority while the latter was an outpouring of Irish triumphalism, attracting huge crowds from the whole of the country both North and South. In turn, Peter Cassells focuses on the statue to the Trade Union leader James Larkin and the role of son Jim Larkin in developing a progressive movement in Ireland. In “Paddy Sad and Paddy Mad, Music and the Condition of Irishness” Gerry Smyth notices how Irish music tends to reflect the two extremes of tragedy and festivity, and, with reference to the French political philosopher Jacques Attali, he considers the provenance of the musical sounds which give Ireland its identity.

Section II: Literary Illustrations begins with “Sorrow and Celebration in the Paris Diary of Theobald Wolfe Tone (1796-1798)”, where Sylvie Kleinman links Wolfe Tone’s experience with that of other great Irish émigrés such as Samuel Beckett and James Joyce. The influence of Yeats’ Cathleen Ni Houlihan outside Ireland is the subject of   Phyllis Gaffney’s article “Dramatising the Myth and Mythologising the Drama:Cathleen Ni Houlihan and Roger Chauviré’s L’Incantation.” In “Merriment and Celebration in Sean O’Casey’s Plays”, Émile-Jean Dumay defends O’Casey’s decision to write political and social drama that could be understood by the ordinary person, while his brilliant use of language constantly invokes dreams of better days to come. “The Festive and the Tragic: Brian Friel’s Dancing at Lughnasa and Wonderful Tennessee” is the title of Martine Pelletier’s article which shows how rituals play an important part in Ireland’s relationship with the sacred, through its pagan and Christian past. In “Christ’s Kirk on the Green Isle: Tragedy Commemorated in Comic Form”, Carol Baraniuk considers the poetry of the eighteenth-century Ulster-Scots poet James Orr. Seamus Heaney and Bernard O’Donoghue are the subject of José Miguel Alonso Giráldez’s “The Festive and the Tragic in Poetry.” Giráldez recalls that poets in the past were viewed as shamans who could invoke the spirit of a place or an object and transform that energy into words. For Heaney poems contribute to the transformation of reality and have a healing effect. They convert obscurity into clarity and darkness into light. O’Donoghue, also digs into his past and from the shadows of his childhood in Knockduff, he too recovers moments of tragedy and moments of joy.

Shannon Wells-Lassagne’s article on Elizabeth Bowen’s The Last September and Fabienne Garcier’s article on Frank O’ Connor’s Guests of the Nation (1931) show how both authors turned to humour as a way of dealing with the Anglo-Irish war. In “Bloomsday as Carnival”, Declan Kiberd suggests that Ulysses was different from the traditional Irish stories which were recited in public to an audience by ‘professional’ storytellers in that it was “to be a realistic account of everyday life, to be read in sceptical silence by the solitary consumer.” Kiberd argues thatUlysses has been misread and misunderstood in that it has been seen as a product of that specialist bohemia against which it is in fact in open revolt.

Section III: Social and Institutional Issues begins with two articles looking at how Irishness has become more acceptable in Britain although Graínne O’Keefe-Vigneron asks herself if perhaps this is a clichéd commercialized form in order to fit into a multicultural Britain. Bronwen Walter, on the other hand, concludes that although the Peace Agreement and the Celtic Tiger have both helped to provoke a more positive reaction in England, the same cannot be said of Scotland where the Scottish state refuses to acknowledge the distinctive ethnicity of one third of its inhabitants.

“From an American Wake to a Nigerian Homecoming” is the intriguing title of Bairbre Ní Chiosáin article. In it she deals with a new phenomenon in Ireland, that of deporting immigrants back to their countries of origin. She reminds the reader of past times when friends and family would celebrate an American Wake to say goodbye to some family member who was going to leave Ireland to find a better life in America and who would probably never be seen again. But all this has changed and now Irish people think nothing of flying back and forth to the New World. Bairbre Ní Chiosáin urges the Irish authorities to think again about the need to take a more sympathetic view of people, like the Nigerian boy who had come to Ireland looking for a better life and who was deported just three months before he was to sit the Leaving Certificate.

“Drinking and Celebrating: A Tragic Alliance? is the title of Philippe Brillet’s article which deals the dangers to health caused by an excessive consumption of alcohol. He claims that Irish people are not aware of this and says that responsibility to take action lies with the government who still tend to look on drinking as part of the culture of Ireland.

William Crotty looks at the Role of the Catholic Church in Ireland in “The Catholic Church in Ireland: Triumph and Tragedy”. Although 91% of the population in Ireland still claim to be Catholic, the fact is that Ireland has undergone a profound change from being a small, rural, traditional, isolated country with an almost mystical relationship between the Catholic Church and the country’s national identity to being a modern, developed country which has one of the fastest growing economies in the whole of Europe. However, while undoubtedly the recent sexual abuse scandals by the clergy have served to accelerate the transformation and redefinition of attitudes towards the Church, Crotty still thinks it has an important role to play in Irish life.

In “The European Destiny of Ireland from Dust to Glory”, Stefano Martinelli looks at what joining the European Union has meant for Ireland. Undoubtedly the EU was the detonator for the remarkable economic growth − the famous Celtic Tiger converting Ireland into a wealthy country whose influence is not only confined to the economic sphere but also to literature, music and cinema. The extraordinary ‘rebirth’ of Ireland is an indicator of the success of the EU.

Section IV: Northern Perspectives begins with Martin Mansergh’s “Celebrations in Northern Ireland: Rising above Rituals,” where he emphasises the need for both communities to show mutual respect for historical memories if true reconciliation is to come about. This call for mutual respect is also echoed in Linda Hagan’s article where she calls on the descendants of Gaels and Planters alike to come together and to learn from the voices of the dead in their resting places. Malachi O’Doherty recounts, with a certain degree of scepticism, the events which took place during the IRA negotiations with the British in 1972, where he says it was clear that the IRA had not wanted a long ceasefire. Carol Le Mouël’s article, “The Good Friday Agreement: An Extended Celebration or an Ongoing Tragedy?” has been overtaken by events by the setting up of the Northern Ireland Assembly on 8th May 2007 and Agnès Maillot considers the future of Sinn Féin both North and South of the border. Although they gained second place in the elections in the North they had very disappointing results in the South, where they lost one of their five TDs. So, where do they go from here?

The editors Marie-Claire Considère-Charon, Philippe Laplace and Michel Savaric are to be congratulated on this excellent collection of articles. Far from being a disjointed collection of essays, it is  coherently structured beginning with ancient legends, pre-Christian celebrations and historical events and then leading on to articles on Literature, including novels, drama and poetry. The Celtic Tiger, the Catholic Church, immigration rather than emigration, the EU, all get a look in and of course the more recent developments in Northern Ireland and reasons to hope for an even better future are also included. Rather than describing this work as a patchwork of essays, I would describe it as a carefully woven tapestry where the articles blend smoothly together. It is a book in which there is something for everyone!