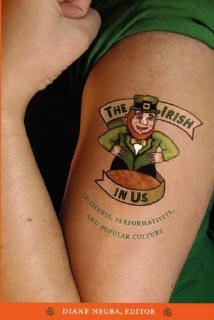 The agonized contortions of the Irish Literary Revival to define the authentically Irish can today seem like exercises in scholastic futility.  Katharine Tynan advanced the belief in «an Irish note … a rainbow of all colours where none conflict».  Yeats’s Celtic Twilight posited a distinctive Gaelic golden age that he hoped modern Ireland might recover.  The advanced nationalist press developed its own linguistic code for what it thought was authentically Irish.  In the controversy over the 1907 premiere of The Playboy of the Western World, Synge was vilified for importing alien influences that, like salacious English newspapers, polluted Irish purity.  On the other hand, works that conformed to the advanced nationalist agenda were praised as «racy of the soil». A century later, cultural studies finds Irishness no less fascinating, especially after the 1990s and its worldwide vogue for whatever was recognizably Irish:  pop music, «authentic» pubs, Celtic design and dancing extravaganzas as well as traditional music, theatre, memoirs, poetry and fiction.  In this post-modern context, however, the analysis of Irishness has moved from exclusivity to inclusivity.

Five years after 9/11 you can see a large Irish flag flying from the back of a fire truck in midtown Manhattan, something that in the twentieth century might only be seen on St. Patrick’s Day or, more likely, might not be seen at all.  What the display may mean is uncertain, debatable, problematic.  Similarly, the keynote in The Irish in Us:  Irishness, Performativity, and Popular Culture is the assertion that Irishness is hardly unambiguous; it is both «nothing and everything».

In addition to her own introduction and concluding essay, Negra includes eleven essays on subjects ranging from the Country and Western singer Garth Brooks through the television series «Buffy the Vampire Slayer» to the high school curricula on the Irish famine adopted in the states of New York and New Jersey.  Collectively these essays resemble a series of Polaroid snapshots —their strength in capturing a particular moment compensates for what they may lack in depth of field or breadth of vision.

Most of the essays examine how American popular culture has commodified, marketed or performed Irishness.  Indeed, the book might be subtitled the uses of Irishness.  Only one of the essays, Sean Griffin’s piece on Irishness in the Fox studio’s wartime musical films likeSweet Rosie O’Grady, Coney Island (both 1943), or Irish Eyes Are Smiling (1944), is not focused on the late twentieth century.

Some of the anthology’s most successful essays —Lauren Onkey’s essay on Van Morrison, Maria Pramaggiore’s study of pregnancy in recent Irish film and Michael Malouf’s analysis of Irish-Caribbean hybridity in film and music— explore the ways in which Irish filmmakers, writers, and musicians accommodate and identify selectively with foreign, especially African American, influences.

Whereas Noel Ignative famously argued that the Irish in America rejected solidarity with racial minorities and emulated their hegemonic masters in order to «become white», several of the authors in this collection argue that many Americans appropriate Irishness as a variously defined white «Other».  Often that appropriation expresses solidarity with others that earlier generations of Irish immigrants abused and scorned.  Perhaps more often, Irish-Americans look to the misfortunes of Irish history so that they, too, can partake of the culture of victimization.  The discussions of Irishness as a coded «Other» whiteness recur with frequency and inclusivity, covering a remarkable range: from white supremacist hate groups in the South to the New York City fire department and New Jersey soccer moms.

There is an underlying optimism in most of these essays in that they attribute agency to individuals and groups rather than to an oppressive globalized and commodified culture. In the 1990s and before, commentators frequently expressed anxiety about American cultural imperialism. The Celtic Tiger and the marketability of all things Irish have refocused interest away from the loss of Irish identity to a confident acknowledgement of the mutability and malleability of Irishness.

Although some of the essays have an unsteady grasp of history (evident, for instance, in the assertion that John Ford was born in Ireland or that «the Great Chain of Being [is] an Enlightenment racial ranking system»), The Irish in US vividly documents how eager Americans have been to embrace Irishness and redefine it to suit their own multifarious purposes.  Together the essays may tell us more about Irish-America in general and New York in particular than about Ireland in the late twentieth century, but this is an engaging collection of lively and timely essays.