The Language of Paul Muldoon

The Language of Paul Muldoon

by Anne Karhio. This text may be archived and redistributed both in electronic form and in hard copy, provided that the author and journal are properly cited and no fee is charged for access. 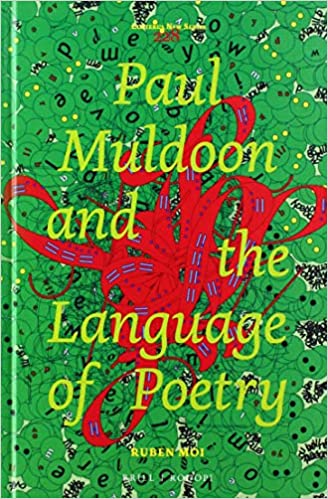 A number of phrases from reviews written over several decades have been repeated so often that they have become almost clichés in subsequent Muldoon scholarship. One of them is from John Banville’s discussion of the 1990 collection Madoc, which according to the novelist, “demands that the reader work in ways that seem inappropriate to the occasion: one pictures work details of Ph.D. students already setting to, tracking down the references, preparing glosses, grinding keys”. While many have quoted Banville’s review to justify their own reservations towards Muldoon’s writing, for Banville it was the necessity of the scholarly process itself that seemed dislikable, as it would “kill Muldoon’s poetry”, and taint the efforts of “an artist of great gaiety and of high seriousness”.

For many, that same process that Banville felt would “kill” the poet’s art has been what jolts it to life. Perhaps the divide between those who enjoy, and those who feel disconnected from Muldoon’s poetic style is often also a divide between those who feel invigorated by such sleuth work, and those who see it as a tedious or unworthy distraction. It is not difficult to see on which side of the line Ruben Moi and his The Language of Paul Muldoon stands. The fifth monograph-length study on Muldoon’s poetry revels in the eccentricity, encyclopaedic exuberance, and crafty irreverence of his writing, and relishes the challenge of possible interpretations and textual traps that seem to multiply with each densely referential collection. There is a detectable enjoyment of the chase itself in Moi’s tracking of the connections in and between Muldoon’s poems, as well as a fondness for the likely and less likely contexts informing the poet’s writing.

Similarly to the three general introductions to Muldoon’s work by Tim Kendall, Clair Wills, and Jefferson Holdridge, Moi’s volume is organised around the poet’s major collections published by Faber and Faber, beginning with New Weather (1973) and concluding with One Thousand Things Worth Knowing (2015). What is different, however, is not only Moi’s focus on Muldoon’s language in particular, but also an awareness of how phenomena specific to the twenty-first century culture, society, and philosophy call for a revisiting of earlier work. Ecological and posthuman perspectives, and questions related to technology feature more prominently in Muldoon’s most recent writing. However, Moi’s awareness of such developments in Muldoon’s latest collections also prompts him to adopt an alternative approach to examining many early poems, including, for example, “The Radio Horse” or “The Electric Orchard” (New Weather). Such a refreshed perspective highlights how many of these poems already anticipated much later transformations in media technology, natural and material environments, or everyday and global communications.

Moi has a distinctive taste for scholarly risk-taking, and he does not shy away from meandering among the forking paths of the literary, historical, and cultural connections that might, or might not, inform specific poems. This inevitably means that some readings and arguments are on firmer ground than others, but also that the study covers genuinely new ground. Whether one always agrees with Moi’s views and propositions or not is less important than how his willingness suggests alternative ways of looking. Similarly to Muldoon’s own at times cryptic trails in poetry and his equally peculiar critical prose (in To Ireland, I and in The End of The Poem, based on his Oxford lectures), Moi also appreciates the intersection between truthful uncertainty and deceptive precision. The more and less likely threads between Muldoon’s literary allusions and their origins are approached as invitations for unexpected discovery rather than obstacles to be explained – and crossed. For Moi, uncertainty and unknowing, scholarly as well as poetic, seem to provide the thrill of the journey, provided one accepts that one only has limited control as to the exact destination.

Moi’s volume is equally attuned to other recognisably Muldoonesque peculiarities: the fascination with neologisms and hybrid words, the alphabetic as well as encyclopaedic structures and lists disturbing narrative progression, and the revelling in slippages, puns, and various errata as creative devices. The study is drawn to what Moi terms the poet’s “alphaphilia” or the development of the “author’s lust for letters” from one collection to the next; his “audiofetishism” as a “sense of insouciant sounds and perfect prosody”; and his “adlinguisticism” or the “reconstellations of syntactic structures and grammatical order” (16). More neologisms and unconventional figures of speech can be encountered throughout the volume.

For the more cryptic elements in some of Muldoon’s poems Moi also adopts a more daringly unconventional approach. The best example is in his discussion of “Yarrow”, which becomes almost like a homage to Muldoon’s penchant for lists and Oulipian structures. Rather than an established paragraph-by-paragraph discussion and analysis, the reader is offered more than six pages of possible meanings of, and associations arising from, the letter “S” in response to the poem’s cryptic female character “S— ”. These vary from “S — shimmers with the secrets of syntax, semantics and shy self” (221) to “S — slithers like a snake in the grass” (222), and from “S — sums up several of the stances in critical approaches to Muldoon’s poetry” (223) to “S — surveys the catalogue of scandalous strumpets and strong and superior feminine figures in Muldoon’s collections” (225). The individual, Moi writes, behind the unnamed name is “irrevocably absent” (228) – but it is the process of filling such gaps and absences, or missing connections, to which Muldoon’s readers, too, are often drawn – or from which they sometimes recoil.

Unlike most monograph-length studies on Muldoon’s work, Moi’s volume is also a thematic study rather than a general introduction. Yet its theme is in itself somewhat expansive: one could argue that focusing on language as a specific aspect of poetry narrows down the perspective about as much as examining the elements of sound in music, or manifestations of visual aesthetics in paintings. But while Moi’s study does not commit itself to any one stated perspective on language, the fact that several critics have, as John Carey phrased it in his rather scathing and also frequently quoted 1987 review of Meeting the British, felt that Muldoon’s language fails “to return us from words to things”, demonstrates a very distinctive manner in which Muldoon queries habitual relations between verbal and non-verbal domains (Carey, cited in Moi 319). When engaging with this volume, the reader might find the best way forward if they stop worrying about narrow definitions and learn to love its exuberance. Perhaps most importantly, Moi alerts us to Muldoon’s approach to language as patterned, as arrangement of semantic units into structures and entanglements that question the borders used to identify these units themselves. To explore such processes, Moi at times zooms in to the smallest one, highlighting Muldoon’s attention to “the importance of the single letter”, even if it is “not the most obvious one, and disconnected from its alphabetic order or lexical function”, like the repeated letter “B” in the poem titles of the sequence “Horse Latitudes” (312). From the letter Moi zooms out to the word, which for Moi, as for Muldoon, is “a suspect device” (The Annals of Chile, 143). It is also a slippery one. In examining the title word “Quoof” of one of Muldoon’s best-known sonnets, Moi is less interested in an in-depth analysis of the unfamiliar “family word”, and instead connects it with a long list of others: “quiff quaff quim quad quag quack queen queer quern quest queue quiche quick quid quill quilt quince quote quip quire quite quit quirk quist quiz quod quoit qursh quat”, and so forth, at some length (118). Such slippage is akin to how Muldoon is not only preoccupied with that relation between “word and thing”, as Carey, as well as more sympathetic critics like Edna Longley have observed (cited in Moi 274), but between word and word, between word and sound, and their connections to almost infinite number of other things at the precarious border of the sayable. Words, then, interact with each other within the grammatical unit of sentence, much less discussed among Muldoon scholars to date but perceptively addressed by Moi in his reading of Moy Sand and Gravel, a collection which plays with “many implications of sentence”: “moral, existential, philosophical, linguistic” (279). Within the linguistic domain, the “[scrutiny] of the sentence also involves such intricacies as word order, start, length, rhythm and prosody of the separate linguistic unit, and, of course, how the particular sentence relates to the preceding and succeeding sentences” (278). And it is through the units of meaning-making specific to poetry, including line and stanza breaks, or metrical components, that the grammatical “sentence” can be employed to resist the dangers of becoming a “sentence” as confinement and disciplinary act. This tension also aligns Moi’s reading of Muldoon’s formal play with those scholars and critics for whom questions related to aesthetic, linguistic, formal, and geographical boundaries and border crossings are also always profoundly ethical and political.

Moi’s own concerns and preoccupations are perhaps most visible in the context of Muldoon’s recent engagement with media and technology, where he sees the poet’s approach to language as a possible, if endangered antidote to techno-determinism. Information technology in particular, as something that “originally organised our knowledge”, he suggests, “has, as Fredric Jameson argues, become the historical model for the cognition and language of our time” (376). One cannot help but detect a tinge of melancholia in Moi’s comment that “Google and online dictionaries and encyclopaedias have also facilitated the interpretation of Muldoon’s poetry” (376). For facilitated, read diluted? It is a topic for another discussion to what extent Muldoon’s approach to technology and the network society considers them as antithetical to poetry. But inasmuch as Muldoon’s poetic language cherishes the illusion of accuracy, immediate access and instant knowledge that are also the fanciful dream of the information age, his writing has also been quick to appropriate the idiom of the network society (of digital storage, online forms, and errors in code) to reveal such illusions. Be that as it may, it is hard to disagree with Moi’s reading of One Thousand Things Worth Knowing as an investigation of how “the knowable and unknowable relate to each other”, and committed to a search for “types of language that might articulate the gradations between the two, and the realm of the unknown” (387).

Muldoon’s writing also displays a heightened awareness of poetry and the printed word as media technologies among others, similarly engaged in the complex “process of data capture” or organising (disorganising?) “data, albeit incomplete”, as Muldoon writes in “Dirty Data” (One Thousand Things Worth Knowing, 106, 107). Of all literary forms, poetry seems perhaps best equipped to adjust to the new media environment. Brian Reed considers poetry “a language-based art with a penchant for reflecting on its channels of communication” (cited in Reed). And as Muldoon’s own career demonstrates, poetry’s suspicion of language as merely denotative of functional, or as simple information transfer pre-dates the digital information age. Modern poetry is thus already well positioned to tackle the challenges arising from the changing media and technological environment. So when Moi worries about the possibility that “Muldoon’s way with language [may] disappear in the new models and formats of language and thinking in the continual unfolding of the IT-revolution”, his own study also shows how the poet’s writing is in no immediate danger of becoming a virtual museum piece.

Stephens, Paul. “Stars in My Pocket Like Bits of Data: The poetics of information overload”. Guernica (15 July 2015). https://www.guernicamag.com/stars-in-my-pocket-like-bits-of-data/, accessed 11 Nov. 2020.