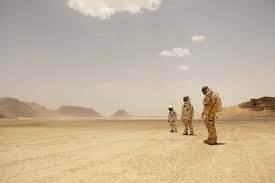 Ruari Robinson’s personal website doesn’t appear to have been updated since 2011, doubtless because he was so busy working on The Last Days on Mars. But, burrow deep into it and you’ll find a group shot of the Academy Award nominees for 2001. And there, embedded in the Hollywood firmament, alongside luminaries such as Russell Crowe, Nicole Kidman, and Ron Howard, stands a bespectacled, vaguely Harry Potter-ish 23 year-old Robinson, present by dint of his nomination for his animated short Fifty Per Cent Grey.

To his left stands Ridley Scott, nominated as best director for Black Hawk Down. There’s a kind of synchronicity to this because Scott’s sci-fi work – specifically Alien – clearly constitutes an antecedent to TLDOM, narratively and, to an extent, visually. Six Anglo-North American astronauts/scientists lead by Commander Dalby (Elias Koteas) have spent six months on a mission to find life on Mars – without success.  However, within sight of departure, they encounter a Martian bacteria which “infects” them, transforming them (inevitably, it seems these days) into Zombie-like indestructible monsters. The dwindling survivors, lead by Liev Schreiber and Romola Garai, struggle to escape the Mars base and return to the spaceship that will bring them home.

And that’s really about it. There are overt visual quotes from other films – a descent into a pit from Alien, a nod to the spinning space station in “2001: A Space Odyssey”, the jump ship from Aliens etc. There is a pretty impressive cast (filled out by Olivia Williams in Ripley-mode) who turn in downbeat but effective (and occasionally affecting) performances. But beyond that?

When watching TLDOM at the Dublin Film Festival in February this year, there was a temptation – particularly as the film was being watched with this journal in mind  – to try and identify clues pointing to Robinson’s national identity, little hints evident only to an eye steeped in Irish visual culture for decades. Frankly, however, this is a waste of time: those clues are simply not present. But, this in itself offers a means of thinking about Irish cinema’s place in the international audiovisual markets and culture.

Robinson didn’t win the Oscar in 2001. In the event, he lost out to Pixar’s For the Birds (though he also faced competition from another nominated Irish company, Brown Bag Films, with Give Up Yer Aul Sins). Nonetheless stardom beckoned – he was attached to the live action version of Akira in the last ‘noughties’ (and apparently spent two years in Los Angeles development hell). In the meantime he maintained his day job, as a VFX-savvy, multi-award award-winning commercials director. (If you’ve watched Irish television, you’ll have seen his work. The Carlsberg “Dream Apartment” ad where a potential tenant is shown around a deceptively spacious terraced house culminating in a balcony view over Croke Park? That’s him.) And when, stardom took longer to arrive than perhaps anticipated, he went out, convinced Cillian Murphy and Don Wycherly to appear in his shot, VFX-heavy calling card short Silent City and promptly secured an agent.

And it was through his agent that Robinson became involved in a project which was already at second draft script stage. Qwerty Films (founded by Michael Kuhn who led Polygram Filmed Entertainment during its Four Weddings and A Funeral heyday) had previously optioned Sidney J. Bounds 1970s sci-fi short story The Animators on a basis of a recommendation from screenwriter Clive Dawson. Thus although Robinson was “heavily involved with the whole development phase” and was able to bring Robbie Ryan (with whom he’d worked on Silent City) on board as DOP, he was in effect a director for hire. (In fairness, convincing the producers to take on Ryan can hardly have been difficult, especially given that he has become Andrea Arnold’s DOP on choice.)

In interview producer Andrea Cornwell stressed that Robinson’s appeal lay in his capacity to lend the film “a unique and personal voice rooted in character” describing his short BlinkyTM as “very emotional”. This may be true and BlinkyTM is more about the human characters than it’s titular android but Qwerty were clearly also interested in Robinson’s effects work: “Ruairi comes from a VFX background so we knew that that was a world he was very familiar with”. The film was reportedly made for £UK7m, a limited budget at the best of time, and truly miniscule by sci-fi standards. Robinson had only eight weeks to shoot, two on location (Jordan doubling for Mars) and the rest at Shepperton Studios in London so much of the film was created in post-production. And this is where Robinson has proved himself in the past – even the visually impressive Silent City was largely self-funded. The small budget for TLDOM meant he had to take on 60 VFX shots himself.

And that is perhaps the most interesting thing about the film: the – to this writer’s mind – flawless visual effects shots which are peppered throughout the 95-minute running time are entirely Irish in origin. Indeed the Irish Film Board’s contribution to the original core funding for the film (the rest came from the British Film Institute and presales to Universal Picture and Focus) was predicated not so much on Robinson’s involvement (though it was probably vital) but on the decision to use Dublin post-production company, Screen Scene.

As Andrea Cornwell noted: “We are doing most of our post production in Dublin at Screen Scene VFX. That brought on national tax credits and investment from the BFI Film Fund and Irish Film Board”.1

There is a certain irony here: in recent years Screen Scene’s effects show reel has been populated by examples of how they can “deterritorialise” pro-filmic content, transforming Northern Ireland locations into the wintry kingdoms of Westeros for Game of Thrones and contemporary Dublin into 1890s Whitechapel for Ripper Street. In addition to conjuring up TLDOM spacecraft and Martian rovers, Screen Scene have worked to deterritorialise the film’s locations. As Robinson out it: “Jordan is Mars with shrubbery, so we will need to do a lot of digital shrubbery removal!”2 That the Irish Film Board’s involvement is conditional on the involvement of a company which (and more power to them) often works to disguise the specific national setting for audiovisual works demonstrates the distance the Board has come from its original, narrower conception of its cultural mission. The Board has long justified support for material with non-Irish settings on the grounds that it gave opportunities for Irish talent to work in a wider set of production contexts, giving them access to experience which they can apply to subsequent Irish projects. (Indeed,  the Board has had to offer such legitimation to win European Commission approval for such state aid to industry, something the latter generally takes a dim view of.)  Whether the decision to support TLDOM will redound to the benefit of indigenous culture remains to be seen. If Silent City was a calling card to suggest Robinson can make features, TLDOM feels like a calling card demonstrating a capacity to make even bigger films. In interviews to promote the film Robinson has consistently stressed the difficulty of making the film under the prevailing budgetary conditions. Having completed this assignment, however, he has clearly signalled that his immediate future lies on the other side of the Atlantic. Asked by Screen International about the lure of Hollywood, his response was unambiguous: “I’m a sci fi guy, that means scale. So yes, hopefully!3