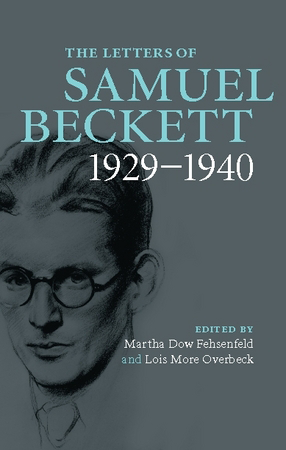 The editors began this project around 1985. Changes in ownership of Beckett’s works, negotiations over publication of his correspondence, and the winnowing down of 15,000 letters to 2,500 to be reprinted in four volumes, along with another 5,000 from which excerpts would be used for annotations, demonstrate the care with which this endeavor has been compiled. Beckett may be the last major writer to have his correspondence extant in an entirely non-electronic form. The range of his letters, two-thirds written in English, 30% in French, and 5% in German, attests to the cosmopolitan range and erudite ambition of his determination to imagine himself, early on, into a literary life.

Fehsenfeld and Overbeck explain how they sought a middle way between the minimalist editorial approach of Richard Ellmann for James Joyce’s letters, and the maximalist approach taken by John Kelly for W.B. Yeats’s letters. Restricted to reproducing those letters that drew directly upon Beckett’s writings, the editors nevertheless seek a liberal interpretation of this control. They explain how their first examples display Beckett’s desire to connect to correspondents. He delivers less information, and more solidarity, or intimacy, as he tries to forge a literary career – and to keep his distance from one.

As Beckett’s confidence grows, and as Murphy finally gets published after nearly two years of rejections, his language takes flight. Their content and style soar like kites, above his cities. His words may relax, energize, or recoil. No wonder “rectal spasms,” as the editors note, characterize the physicality of later 1930s letters, with analogies between the act of writing and primal, raw functions within the body.

He begins with coiled frustration. “I am looking forward to pulling the balls off the critical & poetical Proustian cock” (36). His monograph on Proust he regards more as duty than pleasure. He struggles to separate himself from his fellow and elder Irishman in Paris. “Sedendo et Quiescendo” to Beckett “stinks of Joyce in spite of most earnest endeavours to endow it with my own odours” (81). He then promises an editor at Chatto & Windus a scatological comparison to the precise shape of his bowel movements.

Thomas McGreevy received many of the letters included here. They speak of Beckett’s indolence: “even if I succeeded in placing something and getting some money I don’t think I would bother my arse to move.” (158) He would rather lose the world for stout “than for Lib., Egal., and Frat., and quarts de Vittel.,” (159) he tells McGreevy in May 1933. Yet Beckett wonders why Man of Aran lacked any poteen, and soon he spends more time in London, looking toward Paris rather than Dublin for his future.

A year later, he tells Morris Sinclair of his fears, that “no relationship between suffering and feeling is to be found,” and any joy comparing his own fortune to those with less “begins to look deceptive” (204). He observes himself as if “through a keyhole,” and feels at a distance well away from his own self. “Strange, yes, and altogether unsuitable for letter writing” (205).

He finds the attitude that will infuse his mature work. In Autumn 1934, he informs McGreevy that the dehumanization and mechanical nature of the artist extends to the portraits he studies so intently: “as the individual feels himself more & more hermetic & alone & his neighbor a coagulum as alien as a protoplast or God, incapable of loving or hating anyone but himself or of being loved or hated by anyone but himself” (223).

Still, humor lurks. A spider has two “penes.” The “Kook of Bells” gets a nod. T.S. Eliot spelled backwards stands for toilet. Beckett contrasts the art, plays and concerts he views with English literature. It remains mired in “old morality typifications and simplifications. I suppose the cult of the horse has something to do with it”(250).  He tires of vices and virtues. This mood may, in Spring 1935, account for his difficulties with Murphy. After analysis with Bion, Beckett rages to McGreevy. “If the heart still bubbles it is because the puddle has not been drained, and the fact of its bubbling more fiercely than ever is perhaps open to receive consolation from the waste that splutters most, when the bath is nearly empty” (259).

Yet, he watches the old men as kite flyers at Kensington’s Round Pond that autumn, and he observes them in his letter with the same detail that will enrich his novel. He tells McGreevy of a friend’s comment: “‘You haven’t a good word to say except about the failures’. I thought that was quite the nicest thing anyone had said to me for a long time” (275).

Tedium shrouds 1936. Working for his brother back in Dublin tempts him briefly. “I am thinking of asking Frank does he want stamps licked in Clare Street. Though I fear my present saliva would burn a hole in the envelope” (320). He informs McGreevy: “I do not feel like spending the rest of my life writing books that no one will read. It is not as though I wanted to write them”(362).  Frank asks him after Murphy is turned down again:

‘Why can’t you write the way the people want’, when I replied that I could only write the one way, i.e. as best I could (not the right answer, not at all the right answer), he said it was a good thing for him he did not feel obliged to implement such a spirit in 6 Clare St. Even mother begins to look askance at me. My departure is long overdue. But complicated by owing them £10 apiece (366).

Beckett cannot please possible publishers. “Do they not understand that if the book is slightly obscure, it is because it is a compression, and that to compress it further can only result in making it slightly obscure?” (380). He vows that his next work will be “on rice paper with a spool, with a perforated line every six inches and on sale in Boots” (383).

He roams Germany, refining his fluency, in early 1937. His letter to Axel Kaun in German represents a breakthrough. “It is getting more and more difficult, even pointless, for me to write in formal English. And more and more my language appears like a veil which one has to tear apart for me to get to those things (or the nothingness) lying behind it” (518). While this exchange is well-known, within the contexts of travel and growing unease as the Continent’s fate entangles with his own uncertain future, this letter gains resonance. In 1936 he had noted how at the Hamburger Kunsthalle, “all the lavatory men say Heil Hitler. The best pictures are in the cellar” (384). He shifts from London to Paris to Dublin, unsettled.

Recovering from the 1938 attack upon him by a Parisian assailant, Beckett contemplates an offer from Jack Kahane’s Obelisk Press to translate Sade’s Les 120 Journées de Sodome. He hesitates, not wanting to do the predictably censorable work anonymously, but reluctant “to be spiked as a writer” (604). He as always needs the money, but the project fades away. His later letters document the rejections given to Murphy, and Beckett’s reluctance to stay in Ireland. “All the old people & the old places, they make me feel like an amphibian detained forcibly on dry land, very very dry land” (637).

Even in 1933 he felt an “unhandy Andy” around his family. Frank suffers his own malaise, “with the feeling all the time in the not so remote background that he is strangling his life. But who does not” (369). In 1938, Beckett learns from his brother that their mother is ailing. “I feel sorry for her often to the point of tears. That part is not analysed away, I suppose,” he tells McGreevy. From Paris, he “returned to the land of my unsuccessful abortion,” but only to “keep my mother company” before he goes back for good “to the people where the little operation is safe, legal & popular. ‘Curetage’” (647).

For Beckett’s own intimacies, this compendium remains discreet. Lucia Joyce and Peggy Guggenheim garner proper mention. Beckett stays reticent regarding his relationship with Suzanne Deschevaux-Dumesnil. He introduces her to McGreevy in 1939 as “a French girl also whom I am fond of, dispassionately, who is very good to me. The hand will not be overplayed. As we both know that it will come to an end there is no knowing how long it may last” (657).

By June 1940, Beckett wonders about their fate, “provided we are staying on in Paris.” He tells Marthe Arnaud how “Suzanne seems to want to get away. I don’t. Where would we go, and with what?” (683). He concludes, c/o the painter Bram Van Velde, with a characteristically resigned, yet defiant set of images and thoughts. As those around him await the Nazi occupation, Beckett cites Murphy, and mixes his own predicament with that looming over the recipients of his final letter.

under the blue glass Bram’s painting gives off a dark flame. Yesterday evening I could see in it Neary at the Chinese restaurant, ‘huddled in the tod of his troubles like an owl in ivy’. Today it will be something different. You think you are choosing something, and it is always yourself that you choose; a self that you did not know, if you are lucky. Unless you are a dealer (683-684).

Presciently, an advance notice about More Pricks Than Kicks in The Observeropined: “Mr. Beckett is allusive, and a future editor may have to provide notes” (210). Notes expand here. Each letter earns footnotes; profiles of recipients total fifty-seven. Works cited, an index, and George Craig’s French and Viola Westbrook’s German translation prefaces supplement the letters. Contributors credited by the editors fill thirteen pages.

This is the first of four projected volumes. The diligence of those who have assembled this compendium attests to its thoroughness. Spot-checking, I could find only one small slip, an indexed reference that lacked a referent. The immense labor of Beckett, building up his own talent, is matched by the scholars who present his early correspondence, or at least a third of what remains, to an attentive audience.