The Literature of the Irish in Britain: Autobiography and Memoir

The Literature of the Irish in Britain: Autobiography and Memoir

by Tony Murray. This text may be archived and redistributed both in electronic form and in hard copy, provided that the author and journal are properly cited and no fee is charged for access. 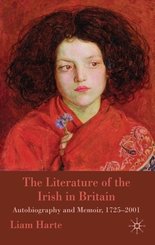 The Literature of the Irish in Britain: Autobiography and Memoir, 1725—2001

In recent years, the Irish have played a prominent role in the popularisation of autobiography and memoir both in Ireland and further afield. This, of course, has been largely due to the extraordinary success of one particular book. In the mid-1990s, Angela’s Ashes, for better or worse (depending on your opinion) did for Irish literature what Riverdancedid for Irish traditional music. But, perhaps because Frank McCourt is often accused of being the instigator of the “miserabilist” turn in autobiography, surprisingly little attention has been recently paid by Irish critics to this deep and rich seam of literary endeavour. Liam Harte went some way to redressing this situation by editing a welcome collection of essays on the subject three years ago. Now he has turned his attention to a specific corner of this canvas by investigating the autobiography and memoir of the Irish in Britain.

In light of the recent upturn in Irish migration to Britain (a projected 25,000 per annum will be making the journey in the next five years), the book has a timely relevance. Beyond the facts and figures about such trends, which can only tell us so much, accounts like the 63 collected in this impressive anthology enrich our understanding of the lived experience of migration in numerous ways. Phrases in his introduction such as “the first recuperative survey” and “open up a largely untrodden landscape” indicate the self-consciously pioneering spirit with which Harte has approached his task. Every migrant has a unique story to tell but, just as importantly, the way in which they tell that story reveals clues to the psychological and emotional impact the experience has had on their personal identity. Harte’s approach helps to illuminate this by showing how Irish migrants represented themselves in their own cultural vernacular, as opposed to the often stereotypical images we are familiar with from both the British and Irish media.

One of the most valuable services the book provides is to problematize the common perception of the Irish in Britain as predominantly victims of exile. The rich heterogeneity of the narratives exemplifies, what Harte refers to as, the “multiple ways” in which migrants reflected on their experience and, as a result, their sense of Irishness. Some of the texts included here will be familiar to scholars of Irish literature: those by writers such as Patrick MacGill, Louis MacNiece and Dónall Mac Amhlaigh, for instance. But others won’t, especially the fascinating extracts from works written in the 18th and 19th centuries by colourful individuals such as Laetitia Pilkington, for instance, who vividly describes her nine-week incarceration in Marshelsea Prison in 1742.

Likewise, John O’Neill who provides an endearing account of his attempt to track down his father in London’s West End in 1808, or the redoubtable Jane Jowitt who recalls her travels around Yorkshire in the early 19thcentury attempting to sell her poetry. It is notable how women writers are more prominently featured the further back in time the survey delves. Whilst they account for almost fifty per cent of the pre-20th century inclusions (albeit from a smaller sample overall) they only constitute about a fifth of the rest of the anthology. This is surprising given the wealth of female accounts in more recent times. The inclusion of extracts from memoirs such as Nuala O’Faolain’s Are You Somebody (1998), Bridget Boland’s At My Mother’s Knee (1978) or the autobiographical accounts of their experiences in England by Katherine Tynan, Eavan Boland or Ethel Mannin would have helped to redress this imbalance.

The experience of migration might itself be conceived of as a form of narrative. It could be said to have a beginning, a middle and an end. But there is a dichotomy between how such an experience is lived and how it is later recorded. The role of narrative (and the inherent relationship between the facts and fictions of which it is the product) is crucial, therefore, for understanding the way diasporic identities are shaped. In his introduction to The Literature of the Irish in Britain, Harte rehearses some of the methodological complexities this presents for researchers. He rightly warns, on the one hand, against the dangers of overly-literary analyses which might dissolve the lived experience of such accounts into “the ether of textuality” whilst, on the other, the danger of reading the testimonies as transparent factual relics of the past and ignoring their undeniable constructedness and aesthetic import. He opts, instead, for an interdisciplinary approach. In the helpful prefaces he provides to each text, he chooses to read his sources as both social history and cultural artefact. So, for instance, where Bill Naughton’s autobiography, Saintly Billy (1988), is constructed around the trauma of uprooting from his native Mayo in the early 20th century and is “a compelling exercise in redemptive recollection”, Alice Foley’s A Bolton Childhood (1975), a second generation memoir set in the same Lancashire town a few years earlier, incorporates both “documentary description” and “quasi-Wordsworthian” flourishes in its depiction of its subject’s political empowerment.

As both of these texts demonstrate, some of the best autobiography on the Irish in Britain in recent years has been motivated by second generation experiences. It is unfortunate, therefore, that some the most absorbing and critically-acclaimed examples of this from the last decade are disqualified from inclusion by the cut-off date of 2001. John Bird’sSome Luck (2002) springs to mind, as do Blake Morrison’s Things My Mother Never Told Me (2002) and John Lanchester’s Family Romance(2007), both by writers who, whilst often regarded as quintessentially English, nevertheless reveal how their Irish mothers left a profound impact on their lives and identities. It is the sorry lot of anthologists, of course, to never be quite as comprehensive as they or their readers might wish. But, given the inevitable constraints on such enterprises, Liam Harte has clearly taken great pains to be as representative as possible. He should be congratulated for producing such a meticulously researched volume and bringing a fascinating and unduly marginalised genre of Irish literature firmly to our attention.