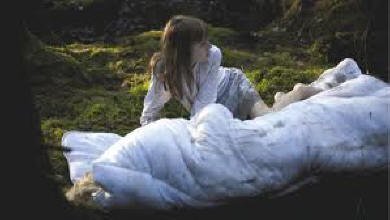 Beyond the abnormally high instance of male crises narratives that dominate recent Irish film output (Parked, Savage, Sensation, Rewind, The Guard,) and genre cycles (notably horror) IFB/RTE funding has in recent years facilitated the emergence of a heretofore underexplored setting that has been absent and even reviled by Irish audiovisual media: the midlands. This is a broad church ranging fromGarage, Eamon, Eden, the creative documentary His and Hers and the TV series Pure Mule. To this list we can now add Rebecca Daly’s confident debut feature The Other Side of Sleep. A defining characteristic of these midland narratives is their contemporary setting in towns outside of the traditional rural / urban axis which take Ireland’s interior as an expressive setting of indeterminacy and transition, albeit in often quite different ways. Stylistically they deliberately depart from the tourist gaze tradition of Ireland on film or generic conventions in an often meditative perception of landscapes and a built environment that is hodgepodge, unremarkable and all too familiar. In Lenny Abrahamson’s Garage (2007) the unworldly lead character Josie searches in all the wrong places for a connection to his surroundings only to find himself shamed, fired and evicted. Presented in a series of vignettes that emphasize the small routines of Josie’s life, the Irish small town, superficially a secure setting of close relationships and familiarity is imagined instead as a location of isolation and fragile networks; the garage in which he lives a make-shift home that externalizes his temporary and insecure status. Gerry Stembridge – attentive to the social resonance of Irish locations in films likeGuiltrip (1995) and About Adam (2000) – offers in Alarm (2008) a portrait of a commuter development on the edge of a small town that is an unstable space of paranoia and foreboding. Structured around successive weekends, the drama of RTE’s TV series Pure Mule (2005-) similarly pivots on an uncertain dynamic of stasis and change; the frustrations of small town life give way to routine escape into alcohol and the eventual decision of two characters to leave definitively and emigrate. The imaginative and very popular His and Hers (2009) also structures its trans-generational portrait of Irish women as a cyclical narrative but in a very different register; its midlands setting corresponding to the transitional, intermediate nature of life itself; a space between.

The Other Side of Sleep continues this spatial consciousness of the Irish midlands as an intermediate zone in a new and eerie configuration: between sleep and consciousness. More precisely, it imagines this midlands setting as an expressive site of trauma. The often oblique narrative centers on Arlene Kelly (Antonia Campbell Hughes) a young factory worker who is prone to sleepwalking and a plot triggered by the mysterious murder of a young girl, discovered by Arleen during one of her night walks.

Although described as a thriller, the film’s dream-like tone and structure dampens any straightforward emotional engagement. Daly and co-writer Glenn Montgomery eschew narrative clarity in signaling what scenes we are to read as memory, sleepwalking or the conscious present. This oneiric shuffling of memory and events is a powerful conceit, reminiscent of European rather than American explorations of the theme. In a displacement familiar from the early films of Atom Egoyan, Arlene’s muted, somnambulant response to the girl’s death is linked to the personal trauma of her mother’s disappearance when she was a young girl. In Freudian terms, the problem of trauma is a problem of narration, the conscious and unconscious in troubled, intermittent and fitful communication and so it is here. This theme is counter-pointed with a naturalist, albeit elliptical style of storytelling that recalls French regional film-making (the films of Bruno Dumont for instance); a style linking the narrative’s subjective and geographic de-centering. We find ourselves trying to position ourselves within the narrative, to identify what is of significance and what is merely banal and quotidian. Of course, the quotidian is immensely significant; providing rhythm and coherence to an existence that has experienced a devastating and potentially irreparable interruption. The setting adds immeasurably to a sense of everyday routine, particularly the early scenes set in the factory where Arlene works. One is struck in these scenes by the rarity of images of factories in Irish cinema, as well as the sense of community among its female work force, which includes the striking presence of actress Olwen Fouéré (in a minor but forceful role as the mother of the boy accused of the murder). An especially strong image here relates to Arlene’s machine work, juxtaposing her semi-conscious, out-of-body state with very real physical dangers. This physical vulnerability connects her with the murdered girl, foregrounding a feminine subjectivity that is all too uncommon in Irish film.

Arlene is seen progressing through a series of unsuccessful encounters with others that reflect her fragile psyche. Her boss seems attracted to her, and although she does not reciprocate, he tries to offer her a lift home but she flees without explanation. She befriends the dead girl’s sister and seeks proximity to the family’s grief only to be repudiated as a stranger by the mother. Likewise she displays an uncertain and impassive response to attempts at physical intimacy from the girl’s boyfriend. In all of these situations Arleen has a spectral quality in which the body and consciousness do not connect. The effectiveness of this tension between presence and absence depends on a delicate and balanced performance of Antonia Campbell Hughes who occupies practically every shot of the film. In the hands of a lesser performer we might quickly tire of the narrative’s unannounced slippages but Hughes manages to convey a sustained combination of engagement and estrangement with proceedings, ensuring the viewer always remains curious and concerned.

Along with this compelling central performance The Other Side of Sleep maintains its delicate tone through Daly’s strong eye for composition, lending the film an aesthetic sensibility that breaks through the everyday surroundings with often striking imagery to suggest a struggle for coherence and harmony. Especially notable is a repeated image of a tree-lined avenue that interrupts the featureless midlands landscape. The image is a utopian landscape of natural harmony to parallel the journey back from grief that Arlene and the dead girl’s family have embarked upon.