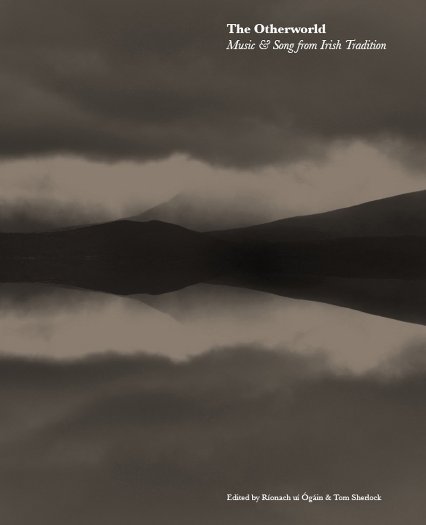 Twenty years in the making and drawing from the National Folklore Collection’s musical and narrative archives stretching back nine decades, this inviting book presents the words and sounds of those who relate tales from the otherworld.  Editors Ríonach uí Ógáin and Tom Sherlock define this expanse as “a domain relating to the preternatural, an alternative realm parallel to or sometimes beyond human earthly existence”.  Having visited it, glimpsed it, or heard music from it, people tell tales and play songs.

What they offer confronts the mystery of the world beyond, and it provides for many puzzled by loss or wearied by drudgery a chance to enter the imaginative sphere. The fantastic leaps out to pull in the wanderer, but it often repels or threatens those humans tempted or foolish enough to cross its border.

The results, compiled here with two CDs of forty stories and songs in both Irish and English, represent but a smidgen of the material at UCD, but they allow researchers and students to listen in on recordings, as well as to follow along with transcriptions and photographs which enrich this well-designed (by Red Dog) text.  Voices from all but Offaly, Derry, and Longford contribute individual and communal memories. The value of this edition rests in its thematic range and bilingual accessibility into this lore.

For instance, the juxtaposition of Irish and English, urban and rural, widens the perhaps expected territory investigated here. Told by Meg Doyle in Dublin’s Ringsend or Edward Kendellan in Stonybatter, the tale of the banshee (a popular choice for many interviewed) from 1980 balances out the preponderance of rural material collected as Gaeilge in earlier years. Following Doyle’s report, the famous fiddler Micho Russell from Doolin in Clare plays “The Banshee Reel” as the text includes a photograph of a local holy well and a placename report (originally in Irish, translated) on a local hill associated with keening cats “wailing and shrieking’.

Séan Ó Catháin tells a legend of Petticoat Loose, who “among other crimes” in Munster, “drowned a school master in Coilleagán and killed infants”. The action damning her was being drunk “and about to have a child” while Sunday Mass was being said. It’s a bit confusing, but the haunting nature of such tales, perpetuated widely and doggedly, supports the popular warning of the fate of a “fallen woman’.

On the other hand, “Amhrán an Frag” comically contrasts a frog’s entry across the domestic threshold (as told to the Conamara teller as if real) with an invented song by Peadar Ó Ceannabháin likening that intrusion to “the fight in the gap of the fort/ an troid a bhí I mBearna an Dúin’.  The mock-heroic, complete with the amphibian converted into a “mermaid’s husband dressed in women’s clothing” conveys the manner in which the everyday inflates into the epic.

Fear, humor, and respect mingle in such reactions to the uncanny. Meeting the devil at the crossroads and learning a rousing tune, for example, can conjure up the clever retort of the human player confronted by the revelation from the next world.  Jigs stolen or learned from devious faeries repeat the prevalent notion that pipers suddenly appear among humans to play before vanishing as quickly.  Máire Ní Bheirne of Teelin passes on such an account to Donegal collector Mícheál Ó Domhnaill in 1974, and from here, the reel “Tiúin an Phíobaire Sí” passes (and takes on two more titles in English) into the repertoire of the group Altan, widening its audience and broadening the scope of the living tradition.

Also common and continuing today is the tacit admonition to those walking about not to enter the realm of those who often are given, for fear of summoning them or a curse, no name but “them’.  The widespread notion that metal and water protect the man or woman from the fate dangled by the fairy hosts or the sí attest to the enduring (and quietly persisting, or at least not denied) awareness of a mysterious presence hovering near farms and villages, in circles, forts, bushes, trees, or cairns.

Associations of venerable places with the otherworld fill many pages here, such as Fionnbhearra (Cnoc Meá near Athenry in Galway) and Áine (Cnoc Áine near Teelin in Donegal).  Most of Ireland is covered, and much of the past century. Collectors for the Folklore Commission, such as Tom Munnelly, Seán Ó hEochaidh, and Caoimhín Ó Danachair (who looks quite the indefatigable itinerant in his leather vest and pipe) garner credit as the predecessors to the current editors and their colleagues, who wrote down and taped such material. The compact discs show the results, originally on acetate disc, cassette, reel-to-reel tape, digital audio, minidisc, and memory sticks. While the technological progression proves the passing of time for its archivists, the variety of places in which the  fieldwork was conducted reveals the way such material was gathered: in the fields, in a car, or at home.

Labeling this as tradition does not detract from its ongoing relevance. As the editors remind us, Tom Munnelly titled a paper “They’re there all the same” when it came to the question of belief. Elusive or vague as Irish responses may continue to be when asked about the truth of “the good people” or the banshee, the popularity of Samhain, bonfires, vampires, lotteries, and prophecy persists despite a purportedly secularised mindset today. One wonders after perusing these attractive pages and hearing the creaky fiddles or bold voices from the recent past what folklorists a century hence will say about us.