by Pauline Collombier-Lakeman. This text may be archived and redistributed both in electronic form and in hard copy, provided that the author and journal are properly cited and no fee is charged for access. 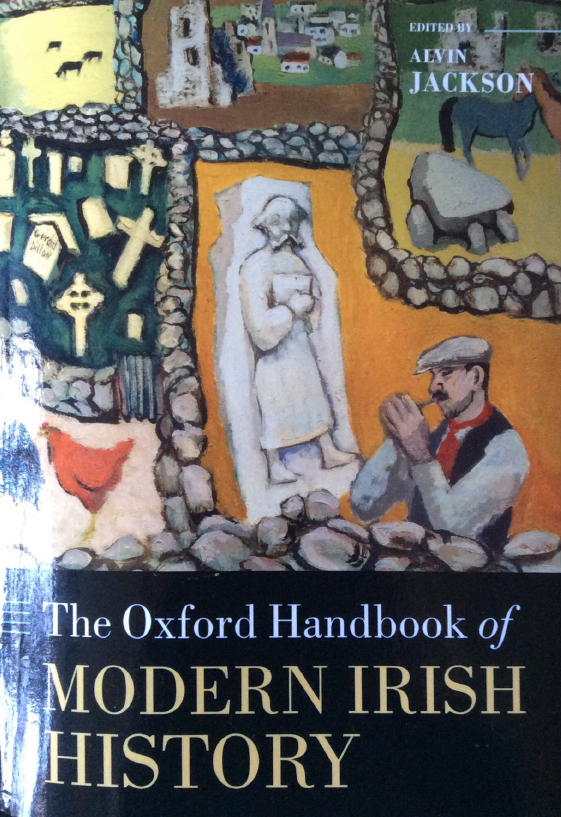 In recent years, scholars and students interested in Irish studies have been provided with new overviews of the history of Ireland – for instance Thomas Bartlett’s Ireland: A History (Cambridge University Press, 2011) and The Princeton History of Modern Ireland edited by Richard Bourke and Ian McBride (Princeton University Press, 2016). The Oxford Handbook of Modern Ireland, first published in hardback in 2014 and now available in paperback, partakes of this attempt by academics involved in the study of Ireland to renew and update history-writing, which has long been deeply influenced by older seminal works such as, for instance, J. C. Beckett’s The Making of Modern Ireland (1966), R. F. Foster’s Modern Ireland 1600-1972 (1988) or S. J. Connolly’s Oxford Companion to Irish History (1998).

The Oxford Handbook of Modern Ireland is edited by Alvin Jackson, whose previous book Home Rule: an Irish History 1800-2000 brought fresh insight into the history of Irish parliamentary nationalism, and it gathers contributions from 36 scholars, each writing in their area of expertise in and extensive work on the topics they each deal with – amongst many others, Stephen Howe on “Colonised and Colonizers”; Enda Delaney on “Migration and Diaspora”; Maria Luddy on “Gender and Irish History”; Patrick Geoghegan on “Rising and Union, 1791-1801” and Peter Gray on “Famine and Land, 1845-80”.

Jackson’s introduction is an amazingly concise, yet thorough, examination of the evolution of Irish history writing since the 1930s. His assessment of the legacy left by the historians he names “reformers” – also known as revisionists – is nuanced and deliberately aims at avoiding the intransigence of previous critics of the revisionist school. Jackson acknowledges the importance of the work achieved by the founding fathers of the school and avoids describing it as a monolithic group. The main issue he identifies concerning revisionism is not so much their distrust of nationalist myths as their dominance and influence over Irish history. That Jackson attempts to go beyond the conflict between revisionists and their critics is all the more perceptible as he devotes a few good pages to the latest trends in Irish history – the development of micro-history, the increasing interest in rediscovering Gaelic Ireland and the growing number of transnational studies. The contributors chosen for the volume include representatives of all the various schools of history, which testifies further to the desire not to confine history writing to a single discourse. The aim here is clearly to avoid privileging any particular approach to Irish history writing in order to overcome the strict antagonism between nationalist and revisionist histories and shed light on emerging and fruitful avenues of exploration.

Following the introduction, the volume is divided into two parts. The first is devoted to “thematic issues” such as “Patriotism and Nationalism”, “Land and the People”, “Business and Industry”, “Faith in Ireland, 1600-2000” or “Visual Arts”. The second part deals with “period studies”: four rather traditional timeframes (c. 1580-1690; 1691-1801; 1800-1920 and 1920-2008) are broken into smaller time periods and topics. The emphasis on key concepts in the first part allows the book to review critical aspects of Irish history in more depth and avoid being merely a classically chronological narrative – contrary to many previous studies. However the fact that thematic issues come first also means that this book is better suited for those who already have a strong working knowledge of Irish history.

The Princeton History of Modern Ireland is organized in a similar fashion but with “narrative and events” first and “topics, themes and developments” second. It also shares a few contributors with The Oxford Handbook (Matthew Kelly on the topic of nationalism, Enda Delaney on the Irish diaspora, Maria Luddy on the question of women’s history, Diarmaid Ferriter on twentieth and twenty-first century Ireland). But The Oxford Handbook includes a few notable specificities. Many of the thematic chapters present themselves as studies of twinned notions such as “patriotism and nationalism”, loyalists and unionists”, “colonized and colonizers”, “migration and diaspora”, etc. This allows a clear and welcome differentiation between – for example – the agenda of 18th-century patriotism and later nationalisms, or between the different and successive trends of Irish unionism, of which loyalism was only one of the many defining features. Working on twinned notions also allows the contributors to emphasise the dynamic interactions between diverse historical developments: for instance, Maria Luddy writes about both the participation of women in the making of Ireland and the growing amount of scholarly research devoted to Irish women; and Stephen Howe brings to the fore how Ireland’s relation to Britain caused it to take part in British imperial ventures and therefore turned Ireland’s position to a hybrid one, creating a multifaceted identity.

A particularly original contribution is Yvonne Whelan’s “Landscape and Politics”, which focuses on landscapes as objects endowed with political and cultural significance and meaning. This is illustrated by two case studies. First, a study devoted to the 31st Eucharistic Congress held in Dublin in June 1932 reads like a condensed research paper and interestingly postulates that Dublin’s geography was used in such a way as to project a specific image for the young Irish Free State – that of a “new, independent and overtly Catholic nation”. Whelan then turns to examine the recent work done on the role played by commemorative monuments, which transform particular places into sites of memory and contribute to the elaboration of historical and identity narratives. In both cases, what is emphasised is that landscapes may work as “a stage” where high political and cultural stakes are at play.

A decent share of the volume is also devoted to cultural history, which is not reduced to literature but includes visual arts (by Fintan Cullen) and material cultures (by Toby Barnard), as well as film and broadcast media (by Robert J. Savage). Together with Whelan’s paper on landscape and politics, these contributions highlight an attempt at encompassing all the domains of history without exception; they are innovative as they focus on subjects that rarely have been studied per se in previous general histories of Ireland. Similarly in the period studies section, the papers on “Irish-Language Sources for the History of Early Modern Ireland” (by Éamonn Ó Ciardha), on “Ireland and Continental Europe, c. 1600-c. 1750” (by Maurice Bric), “Ireland and the Atlantic World, 1690-1840” (by Nicholas Canny) or “Ireland and First World War” (by Timothy Bowman) provide fresh insights into Irish history. Either they give pride of place to alternative sources for Irish history or they cover smaller timeframes and more precise subjects, which makes for a refreshing contrast to the more traditional accounts that generally divide Irish history into the same broad timeframes and concentrate merely on Ireland and its relationship with England and the rest of the British Isles.

This new book is certainly a crucial and welcome addition to the sources we may resort to and recommend to students in Irish studies. However its close reading elicits one small regret. While Alvin Jackson celebrates the “broadening of Irish history” and its “diversity and vitality” (17) and Enda Delaney reminds us that history-writing implies taking into account “many different voices, identities, and variations”, it is to be noted that the footnotes and bibliographical references at the end of each chapter rarely mention the research published by scholars and academics involved in Irish Studies outside of the Anglophone world – except Evi Gkotzaridis’s major works on Irish revisionism. It is to be hoped that the increasing number of comparative and transnational studies, which the Oxford Handbook recognizes as responsible for invigorating Irish studies, will give non-Anglophone scholars the opportunity to contribute more visibly to the writing of Irish history.