The Routledge Handbook of Irish Studies

The Routledge Handbook of Irish Studies

by John H. Ball. This text may be archived and redistributed both in electronic form and in hard copy, provided that the author and journal are properly cited and no fee is charged for access. 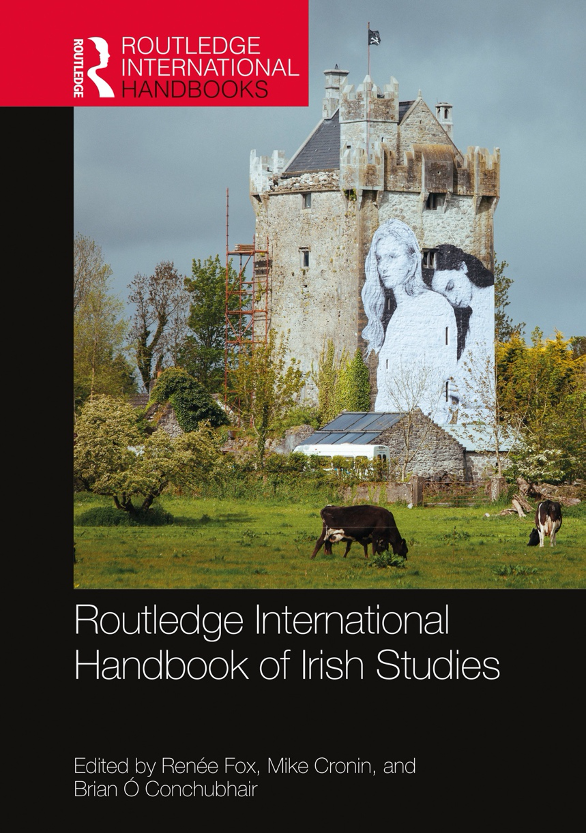 The Routledge Handbook of Irish Studies, edited by Reneé Fox, Mike Cronin, and Brian Ó Conchubhair, is without question an ambitious book. It seeks to give a comprehensive overview of the state of the field of Irish studies in 2020, and, overall, it succeeds at that goal. It is a substantial work, coming in at around 500 pages with thirty-nine essays written by subject area specialists in fields ranging from history and literature to architecture, queer (or quare) studies, music, material culture, women’s studies, and material culture to give but a sample. These areas are broadly organised into six sections: an Overview, Historicizing Irish Studies, Global Ireland, Identities, Culture, Theorizing, and Legacy. Temporally, while occasionally dipping back to earlier periods, the collection focuses on the period from the nineteenth century forward and ends with a final essay addressing Ireland and COVID-19. These diverse topics are held together by a series of introductory essays provided by the editors in each section. These introductions are invaluable in navigating the scope of the book as no matter what one’s academic training, there will be some essays that are unfamiliar intellectual territory. The result is a collection of essays where the whole is more than the sum of its parts. It admirably meets its stated goal as a summary of the state of Irish Studies. However, it goes beyond to be both an impassioned plea and a working model for what Irish Studies should be going forward. Additionally, it is also a composite study of contemporary Ireland in its own right.

The main audience for The Routledge Handbook of Irish Studies (henceforth RHIS) is, unsurprisingly, academics working in the field of Irish Studies. For established scholars in this field, the RHIS presents them with an overview of the latest scholarship in a multitude of disciplines and a chance to position their own work within that scholarship. The RHIS is useful as well as it shows underserved areas of research as well. Maureen O’Connor’s chapter on Irish animal studies stands out here, both for its argument of the value of examining culture though the lens of animals both real and symbolic, and for its demonstrations of numerous points where this area can enrich Irish Studies. This collection likely will spark numerous ideas for future study. For graduate students, newer scholars, or those returning to research, this collection is a gold mine. It not only provides a current state of the field, but the up-to-date references in each essay are numerous, and a strong starting place for building a bibliography for future research. Finally, the broad range of essays offer many suggestions for collaboration on research between disciplines. This aspect of the study should not be undersold: Irish Studies at its best has always been multidisciplinary, and one of the central themes of RHIS is to expand that diversity.

The RHIS argues that its reassessment of Irish Studies is necessary, because in 2007 Ireland went through a recognizable shift in era. Broadly, the collection argues that with the end of the “Troubles” and the rise of the Celtic Tiger in the 1990s, Irish Studies shifted focus away from traditional questions around nationalism and church history. This lasted until the 2007 economic crisis, which sparked new discussions around a more inclusive Ireland and new interrogations of neoliberal policies. This era is the central focus of the collection. With a certain self-awareness, the collection also suggests we are on the edge of a new era by including a final speculative essay by Malcolm Sen on the impacts of COVID-19 on Irish society. The essay effectively finishes the collection as it ends the work with a note of uncertainty. It reminds the reader of the global nature of what we are all living through as well as emphasising how understanding a pathogen is not just about the physical virus but also about the cultural interpretations and practices that go with it. The collection finishes in this voice of uncertainty, both in that the pandemic is far from over and that it may well mark the start of another era of Irish Studies that will require new questions and approaches. In doing so the RHIS proclaims its confidence in its own ideas and an openness for further conversation that marks the very best scholarship.

This mapping of eras is crucial to the larger academic argument of this collection, but it also provides a lively discussion of contemporary Irish culture. This was a surprise as a reader, as the essays do not directly react to each other’s scholarship. However, they indirectly build their points around a series of shared events in recent Irish history such as the 2004 referendum on birth-right citizenship, the successful referendums on gay marriage and abortion, the recent uncovering of the full extent of the horror of mother and baby homes, and the struggles of growing wealth inequality from the austerity programs after 2007. The essays do so not only through academic studies, but also via popular culture and media. The murder-mystery author Tana French makes several appearances, as do contemporary poets, and political advertisements. Material culture, such as a memorable artist’s addition to a vintage porcelain saucer which, indeed, does call into question the missing teacup, shows the importance of including the physical as well as the intellectual dimensions of modern Ireland. These are not only valuable points of academic analysis, but they also give connection points for readers who may find themselves engaged with arguments in unfamiliar disciplines.

The essays in RHIS collectively make an argument not just for how Irish Studies has changed, but also offer a working model of how it should continue changing. Setting the baseline of Irish Studies as it existed before and during the Celtic Tiger period, this collection makes a collective argument that Irish Studies has pulled away from its historic focus on nationalism and church history. It shows a growth beyond the constraints of history and literature to incorporate other academic disciplines. It calls for more gender inclusivity, and especially for more gender and queer theory. It argues that contemporary Ireland needs more engagement with theories and scholarship around race to reflect what it means to be Irish today. Its scholarship shows that neoliberal governmental policies are not only creating widening economic disparities, but they are also failing to provide needed support for the Irish language. Additionally, the collection recognises that Irish Studies benefits from a growing international dimension that has expanded beyond Ireland and, to a lesser degree, the United States. These arguments are supported by the very diversity of the essays which are themselves evidence for the state of the field.

If there are any critiques to be made, they ones typical for this type of work. The broad scope makes it challenging for the reader to hold onto the themes and arguments of a collection. There is also a feeling that in setting up the pre-Celtic Tiger scholarship as an old-fashioned point of contrast to where the field is today, that the work has created a bit of a straw-man argument. Reneé Fox’s chapter in RHIS demonstrates how contemporary authors since 2007 have drawn on nineteenth-century Irish literature previously overlooked in Irish Studies as a whole. Fox makes the important argument that this use suggests there is much in the nineteenth-century text that deserve another look and perhaps a larger place in Irish Studies. Similarly, the pre-Celtic Tiger historiography and scholarship certainly retains value, especially if approached with new questions in mind.

The RHIS is a compelling and extraordinarily useful collection for anyone engaged in Irish Studies. There will be a tendency for scholars to read only the sections related to their disciplines, but it absolutely is worth engaging the collection in its entirety. The essays speak to each other, if indirectly, and together they build a composite picture that is a working model for diverse, international, and inclusive scholarship. It presents a compelling vision of what Irish Studies was, is, and will be.