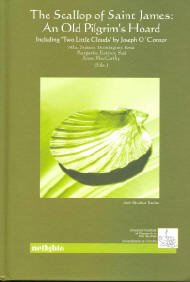 The Scallop of Saint James: An Old Pilgrim’s Hoard.

Another book about James Joyce? as Anthony Burgess would have said. Well, yes, but this is a good one, and with a couple of interesting surprises too. (Burgess also wrote that any book on Joyce would be far from being the last or anywhere near the last). The editors, all lecturers in the English Department at the University of Santiago de Compostela, have transformed the proceedings of the 16th Conference of the Spanish James Joyce Association, held in Santiago in April 2005, into a lively and readable two-volume sequence  (see  the  next  entry)  which  proves that imagination and good taste can be at work without diminishing the quality of the edited texts.

For a start, the present collection of articles begins with a short story by Irish writer Joseph O’Connor, the well-known author ofStar of the Sea. The idea behind this unusual disposition is to show the pervading influence of the master in contemporary writers. O’Connor’s «Two Little Clouds» is a homage to Joyce’s «A Little Cloud», or rather, the translation of Joyce’s story into 21st century Dublin. A reading tip: go straight to the end of the book after reading O’Connor’s story. The last article of the collection, written by José Manuel Estévez Saá, provides interpretative insights and useful comments on the motifs that both authors share through time.

After this introduction, the book makes its entry into the core of the matter with an article by the doyen of Joyce scholars in Spain, Francisco García Tortosa, who writes here on the Joyce industry, on the superfluous activity of much criticism and on the apparent disconnection of professional critics and readers in general. As on many other occasions he takes Ulysses as his key text and encourages the philological, cultural and historical study to decipher the multiple layers of reality displayed in the novel. This process, he insists, should not act to the detriment of the reader’s enjoyment of the book.

Continuing with our interactive revision of The Scallop of Saint James, the reader is advised to jump again to an article well-advanced into the book. In «Translating repetitions in Ulysses» María Luisa Venegas Lagüéns exemplifies what Prof. García Tortosa stated in the previously mentioned article about the need of a conscientious approach to literary texts. Venegas Lagüéns and García Tortosa are responsible for  the most recent translation of Ulysses into Spanish; published by Cátedra in 1999 and which is currently in its fourth edition. This article is an insider’s view on the workings of the translator’s process. Venegas Lagüéns explains many of the problems they faced, the compromises they reached and the decisions they took concerning a crucial aspect of Joyce’s novel, the abundance of repetitions. In their Spanish translation they basically decided to keep them when there was a clear function behind their use and to suppress them when another priority was more important. The article reveals how the translator’s task is a matter of instinct, hard study, exhaustive research and ample consultation in a fruitful interchange with the source text and the target context.

Apart from these chapters, the book is full of substantial essays, not only in the first section, which deals with aspects of Joyce’s work, but in the second section as well, which examines the relationship of Joyce to other artists. Carmelo Medina Casado explores how different aspects of censorship affected Joyce’s work (it offers an interesting aside on the grants Joyce received form England); Jose María Tejedor Cabrera’s article begins with a consideration of the role of windows in Joyce (windows as metaphors for an inner activity) and he also considers Joyce’s oeuvre from the perspective of pictorial criticism. Jefferey Simons comments on Ulysses‘s interaction with orality when considering the long history of accidents in the edition of the text, as if the novel were resisting a final closure.

As regards Joyce and other authors, the possibilities for future discussion are equally fruitful. To mention just a few, Benigno del Río finds similarities between the Hades chapter in Ulysses and the medieval genre of Dance of Death; J. M. Alonso Giráldez claims a strong influence of Joyce on Borges; Ian MacCandless and Francisco Martínez Torres study the presence of Wagnerian motifs in Joyce, and Marisol Morales Ladrón considers the ambivalent attitude that Flann O’Brien felt towards his most admired fellow Irishman.