by Laura P.Z. Izarra. This text may be archived and redistributed both in electronic form and in hard copy, provided that the author and journal are properly cited and no fee is charged for access. 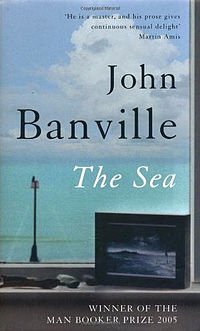 John Banville is unquestionably one of the great contemporary Irish masters of language. His fiction is closer to poetry than prose. Throughout his writing career he has received important awards that has rightly brought him international recognition, and his thirteenth novel The Sea, which won the Man Booker Prize in 2005, is further confirmation of his status. His fiction is “infected with ideas” and radically differs from the great Victorian tradition, which deals with direct representations of society, politics and morals. Banville creates fictional worlds that represent the effects of those systems in the mind of a subject. His main concern is with the individual consciousness, the revelation of the ‘inauthentic’ self, facing outward and inward changes.

While the narratives are structured around different stories, though not always different characters, his recurrent themes are developed in logical progression from one book to the other. The presence of the double, the multiple masks for self-protection, the idea of the lost home, the relationship between the self and the outside world and the self and otherness are also themes that sum up the experience of exiles everywhere. Many Irish writers claim being exiles within their own country, and Banville joins them going into internal exile. Declan Kiberd in the introduction to Reading the Future(2000) says “Irish writers have long taken the view that only in art could a truly desirable state of things be sketched. (…) In so far as an ideal Ireland existed for them, its existence had the quality of a virtual reality, to be found only in their imaginations.” (10) Banville’s writings represent that state of things of a country, and more specifically, the state of mind of its subjects, diving deeply into human consciousness to bring together the world of ideals and the actual world.

Although critics say he is a post-modernist writer, he affirms he has become a post-humanist because he believes that the human being is not the absolute centre of the universe, is not God. His interest in the life of Copernicus and Kepler and their decentering theories inspires him to explore new ways of writing and breaking current paradigms of form. In a lecture delivered at the University of Philadelphia in September 2005, “Fiction and the Dream”, Banville admits that at the beginning he was a rationalist and had complete control of what he wrote. He saw himself as “the scientist-like manipulator” of his material. However, in the mid-1980s, with Mefisto, he began to “let things happen on the page.” This new way of working was as if it was dreamlike “not only in its content and the mode of its narration, but in the manner in which it was written.”

Banville’s narratives have the effect of a dream within a dream in his endless questionings of the self in order to understand the mystery of existence in life and death. The Sea is a successful novel exploring memories and thoughts towards that understanding. Its highly poetic narrative describes the states of mind of a subject in an act of recapitulation of his life after suffering the loss of his wife. Consciousness of existence is achieved through the recognition of change until the last major one – ‘unnamed’ death.

The book is divided in two parts, nearly equal in length, but the division blurs in relation to content. The narrator, Max Morden, meditates upon the process of mortality in three levels – the self, memory and body. Recollections of a “mythic past” – a summer holiday in a seaside village in Ballymore where he met the Graces – get mixed with memories of the past year of his wife’s illness and the present, when he is renting a room in the Cedars, the house on the beach where the Graces lived that summer. Past, cold present and colder future are brought together while memories overlap without order in his mind. Max thought of the Graces mainly at night: the first time he saw the family – the father with his stylish car, the attractive mother, the children on the beach (Chloe and her mute twin brother Myles) and their au-pair Rose, his awareness of sexuality with his first love for Connie, and then Chloe, the idyllic afternoon picnic. But these memories become confused with recollections of Anna’s illness, his relationship with his daughter Claire, the trip they did together to Ballyless for the first time after Anna’s death, and his present in the Cedars whose landlady Miss Vavasour was also part of his past.  The apparently meaningless dream he had of walking homeward in the snow, narrated at the beginning of the novel, haunts the whole narrative enlightening him with the perception of himself as a survivor. This unfamiliar state of the mind, of feeling as if he inhabited a twilit netherworld “in which it was scarcely possible to distinguish dream from waking, since both waking and dreaming had the same penetrable, darkly velutinous texture” (96-7), provokes a state of feverish lethargy as if he and not Anna were the one destined to die. The first part ends with a reflection upon the decay of the body, when he sees his reflection in a mirror. The narrator paints his self-portrait with a tragicomic description of the physical marks of senescence. A parallel offers itself with the last studies that the post-impressionist painter Pierre Bonnard made of himself in the bathroom mirror. This constitutes a trigger in the second part of the book to dive into the deep waters of his consciousness in order to unveil the question of knowing through all the coincidences of mortality.

The development of the plot accumulates a passionate rhythm which in turn reveals the mysteries of the characters’ interrelationships where thoughts are aligned according to the specific state of the mind that is recalled. For example, Max remembers intensely Chloe’s colours, “appley smell” and “fawnish odour”, her hands, her eyes, her bitten fingernails but he “cannot assemble [them] into a unity”, he cannot see her with his “memory’s eye” (139). It is as if everything were a dream; she becomes “pure figment, a memory of [his], a dream of [his]” (140). The process of vanishing memories of Chloe recalls Max’s impatient feelings of loss in relation to himself and to Anna. The same state of mind triggers a series of thoughts on death:

And yet people do go, do vanish. That is the greater mystery; the greatest. I too could go, oh, yes, at a moment’s notice I could go and be as though I had not been, except that the long habit of living indisposeth me for dying, as Doctor Browne has it.

This strategy of simultaneity erases time and space in the narrative and keeps its continuum with mixed insights of death at the moment the narrator is diving deeper and deeper in his unconscious in a paradoxical attempt to defeat forgetfulness of the other while trying to know his own self. He must keep Chloe’s memory inviolate, unpolluted by too much self-knowledge or, indeed, too sharp a knowledge of me. This was her difference. In her I had my first experience of the absolute otherness of other people. … in Chloe the world was first manifest for me as an objective entity. … And if she was real, so, suddenly, was I. She was I believe the true origin in me of self-consciousness. (167-8)

This relationship between self and other, and self and world, is “transubstantiated” at the disturbed look of the other behind a camera. Max is upset at playing the game of the observer and the observed, at the state of being ‘exposed’, of being known at the blind shot of a camera. He dislikes being photographed by Anna because “she seemed not to be looking through the lens, at her subject, but rather to be peering inward, into herself, in search of some defining perspective, some essential point of view.” (173) He becomes aware of this process when he sees the colour photographs she took of her fellow patients in hospital, of those who were seriously ill “in the corridor of death”. The photographs are metaphors of her search for the meaning of existence in death, or better saying, the meaning of death in the last breath of existence. But true knowledge is a delusion and the process of forgetting, of not-having known, of change, continues without end.

While the dreamlike state of mind of going home creates an atmosphere of the struggle of the self towards knowing, of being through others, Bonnard’s picture “The Sea” with a black seagull flying over a rough dark sea towards the light coming out on the horizon through a cloudy sky is a metaphor of that struggle and its possible redemption through art. The representation of this state of the mind is Banville’s challenge. He says in an interview with Ron Hogan: “I do believe that art is a special way to achieve redemption.” (http://www.beatrice.com/interviews/banville/ – 03-08-2005). Recapitulation is the only way towards self-awareness. Memories fade in dreamlike distortions, so nothing pleases Banville better than to play with mind, dreams, space and time to be carried back ‘home’ and achieve self-consciousness.

Banville believes that in dreams the mind speaks its truths through the medium of a fabulous nonsense and so does the novel. His aim is to “make the reader have the dream – not just to read about it, but actually to experience it; to have the dream, to write the novel.” (“Fiction and the Dream”). The Seais a metaphorical novel of having the experience of that dream, of submerging into the unconscious. The crashing waves of memories against the shore mould the state of mind of a subject that is struggling against being dragged under the current of forgetfulness while he is trying to understand his present, his own existence.

I would like to end this review recalling Octavio Paz’s belief that the present is “the meeting place for the three directions of time” (“In Search of the Present”, Nobel Prize lecture of 1990). The Mexican contemporary poet says that modernity is pursued “in her incessant metamorphoses. … It is the instant, that bird that is everywhere and nowhere … it vanishes … we are left empty-handed.” But then “the doors of perception open slightly and the other time appears”, the real time, the present.            This protean modernity concurs with Banville’s concept of a confluence of time and endless transformation of the self. The Sea is a transfiguration of “the passion of art into the passion of emotions” awakening an over-conscious perception of the state of the mind of a subjectivity at a “momentous nothing, just another of the great world’s shrugs of indifference. … and it was as if [he] were walking into the sea” (264), but the crashing waves of hopelessness and oblivion will carry him back endlessly to the shore with insights of the self at a simultaneous past, present and future.