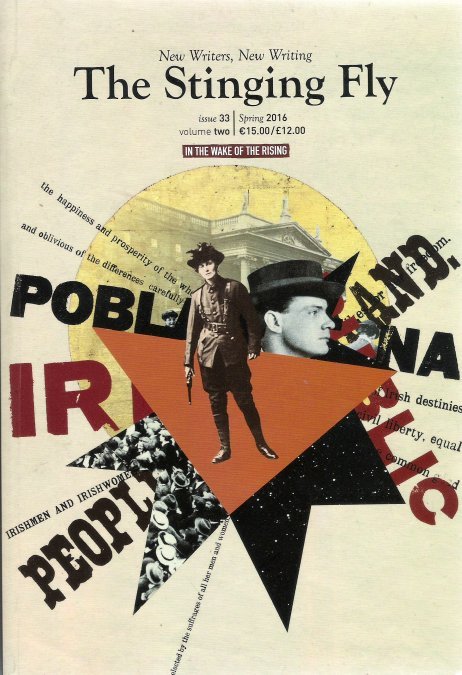 The Stinging Fly, founded by Dubliner Declan Meade, is best known as a literary magazine, but also functions as a publisher of monographs of new Irish fiction. Nearly two decades on the scene now, The Stinging Fly has achieved a level of venerability, having discovered and fostered many new writers who have gone on to award-winning stature.

Many of Meade’s discoveries appear within the pages of this themed volume on the centenary of The Easter Rising. They might be considered to constitute a Who’s Who of new Irish writing, including editor Sean O’Reilly, Kevin Barry, Belinda McKeon, Lisa McInerney, Paul Lynch, Dave Lordan and many others. The volume also includes the work of some more established writers, like Glenn Patterson, Donal O’Kelly, Aidan Mathews, Desmond Hogan and Patrick McCabe – and not all the work is creative writing.

Catriona Crowe’s excellent “How Do We Know What We Know?” not only seeks to make us aware of historiographic practice, but alerts us to the extent of archival material made available in recent years (especially from the Bureau of Military History) and which archival sources remain closed to the public or difficult to access (like many Land Registry documents). The relevance to literary studies may seem remote, but Crowe emphasises that Joyce Studies in particular has benefitted greatly from the digital publication of the 1901 and 1911 census. UCC scholar Hillary Lennon’s examines the fictional representation of historical events from 1920s Ireland, in the aftermath of the Rising – specifically in the short stories of Frank O’Connor.

There is a healthy leavening of irreverence in this volume, as one might anticipate. The history of literary magazines is, after all, somewhat subversive by nature. Kevin Barry writes a wonderful riff on his patriotically noteworthy name, but, no, he was not named for the martyred patriot famed in song, but rather after a cousin killed in a motorcycle crash. Several contributions, while keeping to the overall theme, place us very much in the Ireland of today – HASHTAGRising by Val Nolan is a poem composed entirely in twitter format, and Anthony Hegarty’s Remembering at a Civil Union relates overcoming a ban on political texts at a ceremony to celebrate a gay partnership.

In the guest editor’s preface Sean O’Reilly is direct in his intentions for this issue – It would, he states, “open up an alternative space for writers to re-read and respond to the events of that East Monday, the background and the legacy, and to the Proclamation itself, a founding document of the Republic, outside of the official events and memorials planned by the government of the day. . . ”. O’Reilly is particularly mindful of the language of The Rising, the words which were used, published, to convey the demands for freedom. He instances not just the Proclamation, but also manifestos, pamphlets, posters, the texts of public lectures and other evidence of the importance of writing and writers in the lead up to and events of 1916. O’Reilly also fuses graphically the events of our distant and recent pasts, explaining that the first time he ever saw a copy of The Proclamation he was queuing with his father to pay his respects to the first of the Hunger Strikers to die in 1981. That words could be so powerful as to occasion death struck the boy O’Reilly at the time, and obviously remained with him. His introductory essay ends with the challenge – “What, reader, is your new word for Freedom?”.

There isn’t, perhaps, as much poetry in In the Wake of the Rising, as one might like, but what is here is both evocative and provocative. There are a couple of titles in Irish, including one for a poem by Julie Morrissy – “i measc mo dhaoine” – but the poem is written in English, as is the contribution by bilingual writer Doireann Ní Ghríofa. Her “Split Villanelle” is a technically brilliant exercise on the nature of both the spoken and the written word.

The most interesting and original of the contributions make use of historical fact as it applies to family history or personal experience. One such effort is “Martial Law” a poem by Aisling Fahey. It’s opening lines set up the parallels between the personal and the public –

Mary Purcell, my grandmother, was born in April 1916,
Week of the Easter Rising.
On the same road as she was being delivered, a two-year-old
Child ran from the neighbour’s house,
For what?

The neighbour’s child was one of the sixteen children killed in The Rising – information of which we’ve been made aware recently by such publications as Joe Duffy’s The Children of the Rising.

Similarly Lia Mills’ prose essay focuses on the random nature of violence and urban terrorism and its contested validity. Mills effectively weaves explicit detail of the deaths of combatants and civilians during Easter week a century ago with conjectural threats that mimic contemporary headlines all too familiar to us all – “You could be standing in line at a bank with the news on continuous feed.” Mills wonders if Dubliners awoke to such mayhem in the streets in this century if they would support the activists, and she too weighs the power of language in revolutionary times, emphasizing the need to differentiate rhetoric from reality.

In the Wake of the Rising is not just an eclectic postmodern omnium gatherum of takes on Easter 1916. It is a thoughtful and thought-provoking collection that illustrates well the diversity of response this centenary has occasioned in Ireland, and just how far the nation has, and hasn’t, come.