The Tragedy of the Commons: Atlantic (Risteard Ó’Domhnaill 2016)

The Tragedy of the Commons: Atlantic (Risteard Ó’Domhnaill 2016) 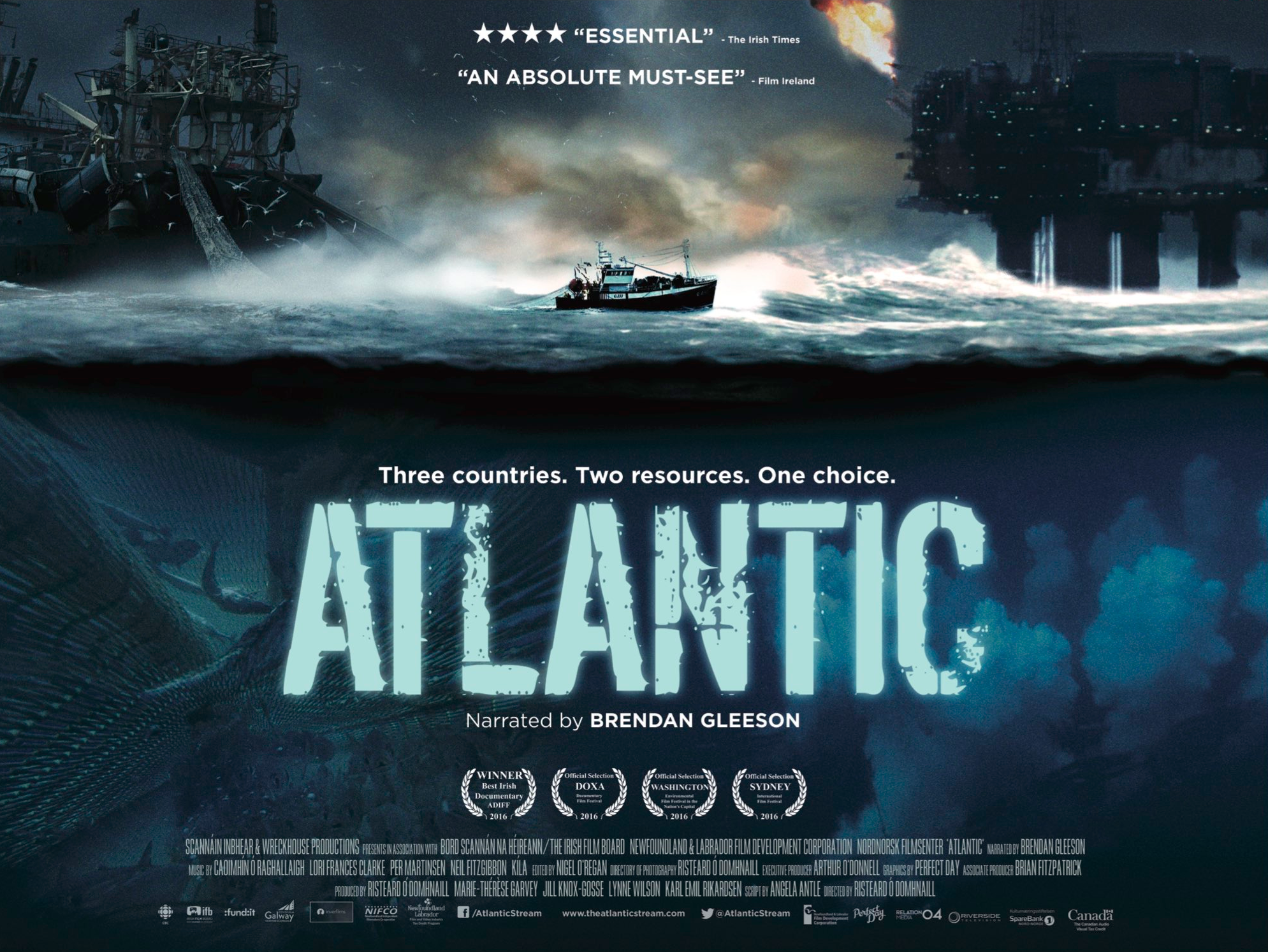 In his seminal essay “The Tragedy of the Commons”, Garrett Hardin (1968) examined how unregulated access to a finite resource induces self-interested behaviour that ultimately destroys that resource. Reckless overfishing is a classic example. Hardin proposed two solutions to preserve sustainability: either the commons is privatised or state regulation is imposed. In Risteard Ó’Domhnaill’s Atlantic we see why both solutions can fail.

Atlantic is a story of resource mismanagement and the contrasting fate of fishing communities in Ireland, Canada, and Norway. Recalling Ó’Domhnaill’s debut documentary The Pipe (2010), about Rossport’s controversial Shell pipeline, Atlantic weaves together a narrative that sets globalisation against national sovereignty, industrial expansion against environmental degradation, and political opportunism against community decline. Ó’Domhnaill punctuates his polemic with scenes of harsh Atlantic beauty; long rolling swells gather in the open sea, snow covered fjords protrude along the Norwegian coast, and seabirds swoop and dive above it all.

In the prologue, narrator Brendan Gleeson sets a doleful tone reciting “Lines To The Ocean” by Martha Lavinia Hoffman:

Old Ocean, none knoweth thy story;
Man cannot thy secrets unfold,
Thy blue waves sing songs of thy glory
But where are thy treasures untold?

“Where are thy treasures untold?” acts as an epithet for the decimated fishing communities of Newfoundland and Ireland. In contrast, Norway’s vibrant industry sustains generations of fishermen in their coastal towns and villages. To explain these differences, Ó’Domhnaill uses archive news footage to trace the impact of key political decisions in each country. In parallel to this political history, the film derives much of its force from its three fishermen protagonists. In Newfoundland, Charlie Kane sits in his seaside home where a once booming village is now dotted with abandoned houses and idle boats. He recalls how industrial overfishing closed the cod fishery and mourns the loss of heritage as the traditional trade is no longer passed on from father to son. With the discovery of offshore oil, Charlie’s sons continue to make a living on the water, although they fear that oil and the income it provides will soon run out.

Off the Donegal coast, Jerry Early is filmed working his modest boat. He points inland to the village where he sees little future and points out to the horizon where foreign supertrawlers – “a city of lights” – hoover up an enormous catch and illegally discard tonnes of dead fish. Jerry is only briefly filmed on land when he appears in court for illegally using a net “with the potential to catch a salmon”. He accepts his guilt but, considering the misconduct of the supertrawlers, rejects the legitimacy of his conviction. In Norway, the gregarious Bjørnar Nicolaisen hauls his large catch onboard while his sons and neighbours fish around him. Although Bjørnar worries about the environmental impact of oil exploration, the actions of successive Norwegian governments and the commitment of community campaigners give him hope that the fishing grounds will be protected.

The Politics of the Sea

Norway is Ó’Domhnaill’s model for what Ireland and the Irish fishing industry could have been; a country that asserts sovereignty over is natural resources to serve the interests of its people. Norway negotiated with the oil companies to secure a 50 per cent state share in exploitation licenses. In Ireland, Seán Lemass gave away these rights for the astoundingly low sum of £500. Norway remained outside the European Economic Community (EEC) to retain fishing rights in its territorial waters. Ireland joined the EEC and sacrificed these rights in exchange for favourable terms for agriculture. The result, as skipper Máirtín Éanna O’Conghaile says, is that “fishing isn’t done at sea anymore; it’s done at tables in Brussels”.

It is not surprising that Ireland surrendered fishing rights for agricultural gains given the relative size of each sector. Moreover, the Irish fishing industry was never comparable in scale to the industries in Canada or Norway and critics of the film will no doubt question the ease with which Ó’Domhnaill makes national comparisons. The deeper point, however, is about Ireland’s lack of political and social vision. Ireland’s fishing communities feel neglected because they have been. At the time of the EEC negotiations, the Junior Minister for Fisheries, Brian Lenihan, noted that there were not enough fishermen to “elect one Fianna Fáil TD on the first count in a five-seat constituency” (qtd. in Mac ConIomaire, 2006).

If Norway is Ó’Domhnaill’s model for what could have been, Newfoundland is his cautionary tale. Overfishing in the Newfoundland Grand Banks, once the world’s most productive fishing grounds, brought cod stocks to the point of collapse in the early 1990s. Startling news footage shows angry fishermen storming the news conference in which Federal Minister John Crosbie announced an immediate moratorium on cod fishing. Some ten years later, this angry scene is reversed as the Premier of Newfoundland and Labrador, Daniel Williams, is hailed as a hero for negotiating a deal allowing Newfoundland to keep all offshore oil revenues. In Ireland, political heroes are harder to find. In the 1970s, Labour’s Justin Keating introduces regulations to return potential oil revenues to the state; his work is later undone by Fianna Fáil’s Ray Burke and Bertie Ahern. Younger generations familiar with more recent forms of political mismanagement are likely to find to common ground with the deep-seated grievances of Ireland’s coastal communities.

Sovereignty and the Environment

With nearly 90 per cent of global fish stocks either fully fished or overfished (FAO 2016), Atlantic tells a bleak and hugely important story. As such, it meets Paula Willoquet-Maricondi’s (2010:10) definition of an eco-critical film, which plays “an active role in fostering environmental awareness, conservation, and political action”. However, Ó’Domhnaill relies heavily on the concept of national sovereignty while the ecological catastrophe of industrial fishing runs deeper than national politics and national rights. In his influential study The End of the Line, Charles Clover (2004:317) makes clear that overfishing is a concern for all citizens because “their birth-right, a healthy ecosystem, has been stolen”. Here, Clover speaks on behalf of the global commons and this voice is regrettably absent in Atlantic.

Although the future of the oceans and the future of fishing communities are interrelated, from an ecological perspective they are not necessarily the same cause. As Andrew Dobson (2007) cogently argues in Green Political Thought, ecological politics does not sit with an ideology of industrial expansion whether that expansion is advocated by market-driven capitalism or state-driven socialism. On this point, Atlantic is unclear about whether the tragedy of Ireland’s Atlantic Ocean is the ecological disaster of overfishing or the fact Irish fishermen have been unable to exploit Irish waters to the same degree as their European counterparts. For many Irish fishermen, the latter view seems to dominate their thinking.

When fishermen refer to the foreign “rape” of Irish waters, as they do in Atlantic, it is a nationalistic, rather than environmental, expression of loss and rage. Harry Browne (2008:47) in The Dublin Review encapsulates this perspective: “if the Spanish fleet has been committing concentrated rape, then Irish fishermen see themselves as mere flashers”. To counterbalance this rhetoric, the film would benefit enormously from contextualising the sustainability of Norwegian fisheries. Norway is a model not simply because it supports a native industry over a globalised one, but because Norway is a leading exponent of sustainable fishing. The cod that floundered in Newfoundland thrives in Norway due not only to state regulation but the cooperation of fishermen for a mutual goal. In expounding the tragedy of the commons, Hardin neglected to consider that individuals might co-operate.

Co-operation was also crucial to the development of Ó’Domhnaill film. Unable to secure official funding – “I hit a brick wall. There was no real appetite for this kind of a story” (qtd. in Brosnan, 2016) – Ó’Domhnaill raised an impressive €56,000 from two crowd-funding campaigns. The Irish Film Board subsequently matched this figure and contributions from broadcasters in Canada and Norway brought the budget to €235,000. In addition to a screening on RTÉ, the Marine Institute of Ireland has sponsored educational screenings across the country.

Atlantic deserves a wide Irish audience if only to highlight our willful ignorance of the seas that surround us. Tourism campaigns invite us to imagine the quaint villages and picturesque vistas of the “Wild Atlantic Way”. We are rarely asked to think about the floating factories that operate, legally and illegally, a few miles out at sea. In 2015, the world’s two largest supertrawlers – the Annelies Ilena (14,055 gross tonnage) and the Margiris (9,499 gross tonnage) – trawled off the Irish coast; both have been hunted out of territorial waters elsewhere. Much of the seafood we consume is imported while restaurants and celebrity chefs promote fish with little thought for sustainability. Thinking of the supertrawlers Máirtín Éanna O’Conghaile says in Atlantic, “we’ll just have to put up with it for the moment – until Ireland gets some politician who’s brave enough to stand up to them.” Perhaps, we should not wait for a politician.

Clover, Charles. 2004. The End of the Line: How Overfishing Is Changing the World and What We Eat. London: Ebury Press.

United Nations Food and Agriculture Organization. 2016. The State of World Fisheries and Aquaculture 2016.

Mac Con Iomaire, Martin. 2006. “A History of Seafood in Irish Cuisine and Culture”. Proceedings of the Oxford Symposium on Food and Cookery. Devon: Prospect Books. 219-233