by Laura Pelaschiar. This text may be archived and redistributed both in electronic form and in hard copy, provided that the author and journal are properly cited and no fee is charged for access. 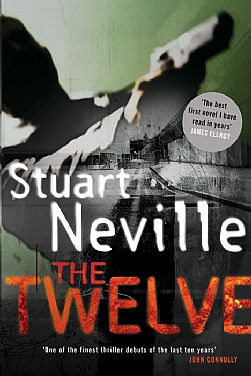 The Twelve by Stuart Neville

Stuart Neville’s The Twelve sits comfortably within the well-known tradition of the Northern Irish Troubles Thriller, a highly popular subgenre which has been thriving in Belfast and surroundings since the early seventies when it first saw the light of day.  As Neville’s debut novel seems to demonstrate literary genres can only with difficultly survive the end of those very particular and specific political, historical, and social circumstances, which engendered them in the first place.

One would have thought that, after the Good Friday Agreement, decommissioning, and the setting up of the Northern Ireland power-sharing executive, after all the painstaking work that went into the political and cultural steps that make up the Peace Process, that a novel like The Twelvemight have become obsolete, out of date, out of place, out of literature. Instead literature is an unpredictable organism and what should have been dead and buried has the power to survive against the odds. Given that the advent of the Post-Troubles era which should have buried the Northern Ireland Troubles thriller, Neville’s novel comes across as a sort of ghostly apparition. It is therefore most appropriate that the Twelve to whom the title refers are the twelve ghosts of the victims of Troubles violence , each of whom is looking for revenge, having been killed by the protagonist Gerry Fegan  —  a ruthless IRA killer, who is both feared and admired (“He looked like a killer, the purest kind, the kind who killed more out of want than need” (p. 144). Fegan did twelve years in the Maze and since the last week of his imprisonment has been haunted day and night by each of these twelve victims.

The Twelve could certainly be defined as a gothic Troubles thriller (not the first one in the family: Maurice Power’s Children of the North trilogy comes, among many others, to mind) both in terms of its belonging to a literary genre which should be defunct, and in terms of its content  —  the twelve gentle shadows that kindly but relentlessly haunt Gerry, their material killer, in order to force him to kill those they believe are morally responsible for their own deaths (among them, terrorists, priests, politicians).

The Twelve can also be read as a Northern Irish Revenge tragedy with Gerry Fegan playing the double role of ex-killer and current avenger. He certainly fits perfectly into this tradition, as an isolated, alienated, brooding individual who is engaged throughout the novel in pursuing his avenger’s task. He is an unusual avenger in that he is also purging his own sins and his sense of guilt. “Memory”, we are told, “cursed him”, and there is no doubt that the death of his unforgiving mother who, after not having spoken to him for sixteen years, died telling him that she was ashamed of him, has a powerful Joycean echo in this sense. The ruthless killer without a conscience is gothically transformed in post-Troubles Belfast into an epic hero with a conscience. After all, the gothic is that literary mode in which the past never goes away but comes back to haunt the present, demanding that old wrongs be put right. But Fegan’s revenge plot  —  with its trail of violence, politics, and inexplicable death  —  threatens to put Northern Ireland’s frail post-conflict peace process in danger and to destabilize the government  —  before thickening and becoming,  like any other respectable thriller, both convoluted and multilayered. But the Revenge will be carried out, those responsible for the twelve original deaths will meet their unavoidable destiny (including a priest) and the twelve shadows (four civilians  —  including the inevitable mother and child  —  five soldiers, one policeman, and two loyalists), will dissolve, one by one, at the end of the novel.

Neville’s first novel parades without shame all the most practised clichés and stereotypes of the genre  —  the psychopathic killer, crooked British politicians, double-dealers, freedom-fighters, secret agents, innocent women, in a mix that has not kept up with the times but seems a rehash of films already seen, books already shelved. Just as Fegan thinks, at a certain moment in the novel that “the cause he once killed for was long gone”, and reflects at the close that “all he knew was this place had no more thirst for war. That had been quenched long ago. Men like him no longer belonged here. Exhaustion washed over him in a heavy grey wave”, we too might conclude that given that the conditions that provided the context and justification for the Northern Ireland Troubles thriller, with all their political permutations, have now changed so radically, so too should the genre itself. But then again literature is an unpredictable organism and the future of the troubles thriller in the North is still to be decided.