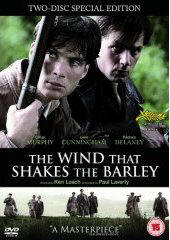 The top grossing Irish film in the 2006 box office was also its most controversial. Ken Loach’s The Wind that Shakes the Barley won the ‘Palme d’Or’ at Cannes in May ’06, was released in Ireland in June ’06 and had become the highest grossing domestically produced film ever by August ’06. The film was also winner of 2006 Best Irish Film at the Irish Film and Television Academy (IFTA) awards in February 2007.  Set during the War of Independence and the Civil War, the film starred Cillian Murphy alongside a mix of professional and non-professional actors, and followed the fates of two Cork-born brothers who, in the best tradition of the Civil War narrative, ultimately ended up on opposing political sides of the conflict.

What I would like to explore here is not so much the content of the film, which is very much in the mould of Loach’s oeuvre, but the responses to it from a variety of interest groups who made the most of the media’s fallow summer period to express their disparate and often conflicting opinions on a film that was widely perceived as a ‘corrective’ to Neil Jordan’s earlier Michael Collins (1996). Here was the Fianna Fáil film that would set the record straight on Jordan’s romanticisation of the Civil War hero whose short life and political career promised a future that was rudely usurped by de Valera and the party he led into, and maintained in, power.

As didactic as one expects Loach’s work to be, The Wind that Shakes the Barley did not invite debate as a consequence of its own narrative construction but because of its provocative position-taking. Unsurprisingly, the first shots fired in the ideological battleground were by those who had not seen the film. Simon Heffer, biographer of Enoch Powell, shared his feelings with his Daily Telegraph (June 3) readers thus:

Talking of hypocrisy, has there been any more nauseating lately than that of the bigoted Marxist film director Ken Loach on winning the Palme d’Or at Cannes? … He hates this country, yet leeches off it, using public funds to make his repulsive films. And no, I haven’t seen it, any more than I need to read Mein Kampf to know what a louse Hitler was.

Whatever about his sentiments, Heffer’s labelling of Loach’s film as British is contentious; for Irish critics, politicians and the Irish Film Board this was indisputably an Irish film. Financing, in fact, had come from an amalgam of sources; officially the film was an Irish/UK/Spanish/Italian/German co-production and various accounts produce different budgetary figures. It seems that, of a budget of €6.4m, €3.6m was raised under Section 481; the balance came from the Irish Film Board, the UK Film Council’s New Cinema fund and Filmstiftung Nordrhein-Westfalen, with smaller contributions from the other partners. The film was shot in Ireland and post-produced in Britain, probably for the last time after British chancellor, Gordon Brown’s, announcement that from now on tax relief would only be applicable to those films produced in Britain.

Financing is, obviously, only one measure of a film’s identity; and we could argue that its nationality, if it must have one, could equally be decided by creative intent. What’s interesting here is that both the principal territories with an investment in claiming the film read it as a reflection on their own particular political and historical concerns. For Loach, The Wind that Shakes the Barley was an anti-imperialist film that covertly critiqued British involvement in Iraq, not the first instance of a British artist using the Irish situation to make a statement about their own country’s military/political campaigns, nor indeed the first time that Loach himself had done this, an earlier example being his Troubles film Hidden Agenda (1990). On the Irish side, the film was appropriated by both Fianna Fáil and Sinn Féin as vindication of their own origins. The latter even went as far as producing a fund-raising T-shirt (available on-line and in the Party shop) with the title, ‘The Wind that Shook the Barley’, emblazoned over an uncredited photo of an IRA flying column. True to their dual financial imperative, the two British tabloids with editions in Britain and Ireland, the Sun and the Daily Mail, offered hyperbolic readings of the film that were as ‘pro’ in one territory as they were ‘anti’ in the other. Thus, both their Irish editions lauded the film’s success in Cannes, while their British editions savaged Loach in language similar to that employed by the Telegraph. «Cillian’s men give Brits a tanning in Cannes» read the headline in the Irish version of the Sun, while its UK big brother shrieked that, ‘Top Cannes film is most pro-IRA ever’.

At home, the letters’ pages reflected the divided opinions expressed in the media over Loach’s depiction of Irish history. The highest profile engagement between two political and (nominally) artistic perspectives came from Kevin Myers, now a columnist for the Irish Independent after a long career with the Irish Times, and Professor Luke Gibbons writing in Myers’ old paper. In an essay on The Wind that Shakes the Barley, printed in the June 17 edition of the Irish Times, Gibbons discussed the film’s commitment to highlighting the social and historical divisions of the Civil War, praising Loach for de-romanticising Republican history. He also took issue with the current idea that the murder of landowners in Co. Cork was an early example of ‘ethnic cleansing’, praising the film for its depiction of its representative Protestant as an informer. It was this point in particular that drew the ire of Myers:»there we have it,» he wrote in his column of June 28 in the Irish Independent, «in a single poisonous paragraph; all the exonerative filth, all the moral caveats, all the easy generalisations, all the special sectarian pleasing, all the moral separatism, by which the Irish republican agenda proceeds». Happy to state that he had not seen Loach’s film, Myers concluded by pouring scorn over the notion that Gibbons could be ‘Keough Family Professor of Irish Studies at the University of Notre Dame’, an appointment that in Myers’ opinion, was as ludicrous as the spelling of the family name. Awarded a right-to-reply, Gibbons wrote a detailed response (July 1), in theIrish Independent refuting Myers’ political and personal jibes.

Those who remember the many column inches devoted to Jordan’s Michael Collins, will conclude that little has changed in the ten years that bridge the release of both films. This too was marked by the exchange of political analysis and personal abuse, again often articulated by historians and columnists who took some pride in asserting that they had not seen the film. Both films were enormously successful in Ireland and less so elsewhere, reminding us, if nothing else, that history in Ireland is still a vibrant, contentious and popular topic.