by Jerry White. This text may be archived and redistributed both in electronic form and in hard copy, provided that the author and journal are properly cited and no fee is charged for access. 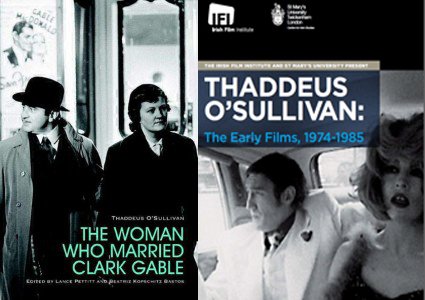 Reviewing Lance Pettitt’s recent work on Irish filmmaker Thaddeus O’Sullivan poses a genuine quandary.  On the one hand, I see it as exemplary scholarship.  I mean this not in the usual clap-on-the-back, job-well-done kind of way, but rather quite literally, as in “this is an example of the kind of scholarship we really need more of”.  On the other hand, I cannot help but quibble with some of the most fundamental choices that Pettitt has made, namely the specific film that he has chosen for the most substantial treatment.  In the final analysis the “exemplary” part of the response overwhelms the “wish he had chosen a different film” part, there’s no question of that.  This is the kind of thing people in Irish Film Studies need a lot more of, and this is certainly the way to do it.

The critical objects I am referring to are a book and a DVD set, both devoted to the Irish filmmaker Thaddeus O’Sullivan.  O’Sullivan is probably best-known for his 1990 film December Bride (itself the subject of a book-length study by Pettitt, published in 2001), although he also directed more conventional films such as the Troubles-thriller Nothing Personal (1997) and episodes of the British television series Silent Witness.  O’Sullivan is thus a key part of Irish film history, having started making experimental films about Irish people in London, then gravitating towards brooding and visually sumptuous narrative films like December Bride before settling onto the eccentric fringes of the media industry of These Islands.  The book I am reviewing here, published in 2013, bears the title The Woman Who Married Clark Gable, edited by Pettitt and Beatriz Kopschitz Bastos.  It includes the screenplay of O’Sullivan’s 1985 short film The Woman Who Married Clark Gable, an introduction to that screenplay by O’Sullivan himself, essays by four scholars about the film or about O’Sullivan’s film work generally, and a DVD of the film itself.  Because the book is published by Brazilian press Humanitas and two of the aforementioned scholars are Brazilian, everything is here in both English and Portuguese; the DVD has subtitles in Portuguese and Spanish.  The DVD set I am reviewing is called Thaddeus O’Sullivan: The Early Films, 1974-1985.  This is a two-disc set, with five films altogether, none of which have been on DVD before and all of which had previously been somewhere between extremely difficult and impossible to see outside of an archival setting.  This set features a booklet with essays by Pettitt and the Irish Film Institute’s Sunniva O’Flynn, as well as short notes by Pettitt on each film.  It is published by the Irish Film Institute, where O’Flynn is a long-time curator and programmer.

I see this work as exemplary for two reasons.  Perhaps the simplest of these is because of the quality of the scholarship on display here.  The booklet that comes with Thaddeus O’Sullivan: The Early Films is a fine example of different kinds of expertise being brought to bear on material in a way that will genuinely help an interested (perhaps academic, perhaps non-academic) viewer make sense of the films.  O’Flynn’s contribution is titled “En-gauging with the Work”, and as befits her experience as an archivist focuses on the physical properties of these films, specifically their quality as work made in and distributed on 16mm.  This is key to understanding the original context of the films’ production and initial reception, and goes a long way towards helping a reader understand the world of independent filmmaking in the 1970s and 80s.  In the shift to digital such considerations are too-often lost, and it is archivists and the special expertise that they develop who are best positioned to bring them back to the centre of discussions around world cinema.  Pettitt’s writing in the booklet is for the most part clear and precise, and does a good job of connecting these films to his ongoing scholarly work around migrant media in a way that is not too dependent on familiarity with the esoterica of these kinds of debates.  For someone looking at these films and not quite knowing what to make of them, these essays and notes will be genuinely helpful.  The book The Woman Who Married Clark Gable takes a very different tack, but the quality of the writing is also, for the most part, very high. Pettitt’s lead essay is a wide-ranging discussion of O’Sullivan’s work overall, and does a very good job of placing him in the group, in Pettitt’s words, “who collectively formed a ‘new wave’ of Irish filmmakers that benefitted from the brief life of the first Irish Film Board (IFB, 1981-1986) that emerged from legislation passed after concerted lobbying in 1980” (48).  Roy Foster, one of Ireland’s most celebrated historians and a surprisingly knowledgeable cinephile,1  contributes an illuminating essay on the connections between the film and the SeánO’Faoláin short story it’s based on.  Thaddeus O’Sullivan’s introduction to the complete screenplay of The Woman Who Married Clark Gable is just as illuminating as it mixes recollections of the details of production with meditations on the finer points of the characters’ psychology and social positions.  Across these two objects there is a tremendous amount of really high-quality historical and critical writing, writing that is pitched in very different registers.

The second reason I see this as exemplary has more to do with the state of Irish Film Studies overall.  Like so many studies of small national cinemas, it is a lot easier to read about important parts of the cinema’s history than it is to see them.  I see this in the other cinemas I write about regularly, namely Canadian cinema and Swiss cinema.  At this stage in the game the critical and historical framework is in place; there are solid narrative histories available, along with studies of key filmmakers and close readings of key films.  That work, for the most part, is done, but much contemporary scholarship focuses on trying either to re-do it or do work on its margins (and I am as guilty of this tendency as anyone else).  What we lack in studies of national cinemas like Canada’s, or Switzerland’s, or Ireland’s, is reliable access to the films themselves, many of which remain out of print or were simply never released on VHS or DVD or streaming video, generally for reasons that nobody can quite explain.  To say that the kind of work that Pettitt and Kopschitz are undertaking here (which follows on a similar book, also published with Humanitas in 2011, devoted to John T. Davies’ film The Uncle Jack) is necessary would thus be a colossal understatement.  The continued unavailability of “canonical” Irish films such as Pat Murphy’s Maeve and Anne Devlin (neither of which have ever been released on video), Margo Harkin’s Hush a Bye Baby (released some years ago on both VHS and DVD but now nearly impossible to find), Cathal Black’s Our Boys (never released on video) or Joe Comerford’s Reefer and the Model (released on VHS but never on DVD) strikes me as nothing short of scandalous.  Until the publication of Thaddeus O’Sullivan: The Early Films, 1974-1985, I’d have added Thaddeus O’Sullivan’s A Pint of Plan and On a Paving Stone Mounted to that list.  A student working her way through standard histories of Irish cinema such as Ruth Barton’s Irish National Cinema or Martin McLoone’s Irish Film: The Emergence of a Contemporary Cinema (both more than a decade old now but both still very durable and quite widely used at the undergraduate level) will more often than not be flummoxed as she tries to actually see what the authors are talking about.  Scholars like Pettitt, who are taking this matter in hand by working with archivists, filmmakers and international publishers to make key films more widely available, deserve the most vigorous thanks and support that we can muster.

Having said that, there is something about Pettitt’s and Kopschitz Bastos’s edition of The Woman Who Married Clark Gable that I find a little curious.  I saw the film almost twenty years ago, when researching my MA thesis at the Irish Film Archive, and had not seen it since.  I had only the faintest memories of it.  Upon re-watching it, I must say I did not experience any kind of epiphany.  That was not at all the case when I re-watched films like A Pint of Plain (1975), which is part of Thaddeus O’Sullivan: The Early Films, 1974-1985 and which I had actually seen a bit more recently (in addition to that 1997 trip to the archive I had seen it again in 2002 at a UCD film conference called “Keeping it Real”, where Pettitt was a keynote).  A Pint of Plain is a crazy little masterpiece, rambling and disorganised and rigorous all at once, a pleasure to look at and a marvel to consider.  My memories of being excited by it in both 1997 and 2002 came rushing back as I watched it again on the desktop computer in my study.  The Woman Who Married Clark Gable is a different story.  Roy Foster’s essay in the Pettitt/ Kopschitz Bastos book opens by describing the O’Faoláin work on which it’s based as “a slight and rather unsatisfactory short story” (193), and despite Foster’s and Pettitt’s best efforts, I cannot help but consider that to be a good description of the O’Sullivan film as well.  I can only guess at the reason that this was the film that Pettitt chose for the more full scholarly and archival treatment, although I suspect that it has something to do with the fact that it stars a youngish Bob Hoskins (who had only appeared in a few films in 1985 before being nominated for an Oscar in 1986 for Neil Jordan’s Mona Lisa) and Brenda Fricker (who in 1985 was known mostly as a highly professional television actress, before winning an Oscar in 1990 for Jim Sheridan’s My Left Foot).  Furthermore, among O’Sullivan’s short films, this is the one most likely to seem vaguely familiar, having played alongside Letter to Brezhnev on UK cinema screens.  Still, I am sceptical that the film – a strikinglyblack and white story about a defeated but movie-mad working class Irish woman married to a sweet but slightly dense Methodist Englishman – really repays this level of critical engagement.  Viewers approaching truly oddball films like A Pint of Plain or 1978’s On A Paving Stone Mounted (also on Thaddeus O’Sullivan: The Early Films, 1974-1985) could really do with some critical assistance, and those films illuminated much more about the English-speaking avantgarde than The Woman Who Married Clark Gabledoes about broad problems in 80s narrative cinema.

That is all to say: this is excellent work, I just wish that some of that work had been focussed in a slightly different direction.  All in all, though, that is a minor complaint, and one that comes close to the cardinal sin of reviews like this, which is being prescriptive.  Pettitt and Kopschitz Bastos made their choices and the writing that they marshal around those choices is for the most part excellent.  On the larger issue, that of the desperate need for scholars to take more of a role in making the primary texts of Irish cinema available and understandable, I am quite unambivalent.  The work on Thaddeus O’Sullivan led by Lance Pettitt offers a model for other scholars, a model that helps us see what academically serious, publically minded and sustainable film scholarship could look like.