Theirs is the Glory: Arnhem, Hurst and Conflict on Film

Theirs is the Glory: Arnhem, Hurst and Conflict on Film

by Eunan O’Halpin. This text may be archived and redistributed both in electronic form and in hard copy, provided that the author and journal are properly cited and no fee is charged for access. 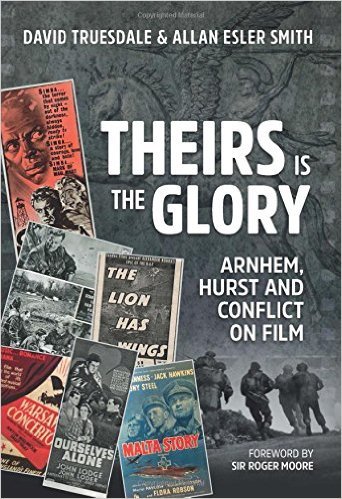 That Theirs is the Glory spans two distinct genres, military history and film, is perhaps appropriate for a book in which the bridge at Arnhem holds centre stage. It will be of interest alike to battlefield buffs and to students of film, although both may find some fault with the treatment and with the book’s structure, approach, and remarkable weight (1.2 kilos for 355 A5 pages). It discusses conflict-themed films directed by Brian Desmond Hurst (1895-1986). Hurst, a Belfast man wounded at Gallipoli in 1915, was afterwards deemed unfit for front-line service and was assigned to a labour battalion. Bored with his lot, he deserted in 1917, joining the Royal Army Service Corps, and was again wounded on the Western Front.

The authors are David Truesdale, a prolific and respected writer whose works focus on the experiences of ordinary soldiers rather than of the generals and grand strategists who often decided their fate; and Allan Esler Smith, Hurst’s grand-nephew and administrator of his estate. Sir Roger Moore, veteran of seven James Bond movies, contributes a foreword in which he paints an affectionate portrait of Hurst, who financed his studies at RADA.

Raised in loyalist East Belfast, Hurst was proud equally of Ulster and of Ireland: he famously said that “I would fight for England against anybody except Ireland … an Englishman is worth twenty foreigners … an Irishman is worth fifty Englishmen”. Openly gay, he found 1930s Hollywood, where his great mentor was the Irish-American director John Ford, rather more congenial than provincial Belfast. During and after the Second World War he worked mainly in Britain, converting to Roman Catholicism in 1947, and producing both privately-commissioned dramas and public information films.

The authors concentrate on Hurst’s 1946 film Theirs is the Glory, in which British veterans of Operation Market Garden, the ill-conceived attempt by airborne forces to seize key river and canal crossings in the Netherlands in September 1944 which if successful was predicted to bring victory against Germany by Christmas, returned to their Arnhem battleground to re-enact their bruising experience of combat, defeat, and escape or capture. The book also provides a summary discussion of other films directed by Hurst which portray armed conflict. These include the Irish War of Independence-themed Ourselves Alone (1936); The Lion Has Wings of 1939 which extolled British air power; Miss Grant Goes to the Door (1940), an interesting Ministry of Information short film made to raise public awareness of the danger of German parachutists; and The Malta Story (1953), which is primarily about aerial warfare of which Hurst had no direct knowledge. In addition, chapters are devoted to discussion of the experiences of individual soldiers who fought at Arnhem and then re-enacted their roles in Theirs is the Glory; to their weaponry and that of their German opponents; and, somewhat confusingly, to the Allied attempt to seize the Dardanelles in 1915 through the landings at Gallipoli. It seems a bit odd, just because Hurst fought there, to devote a whole chapter to the theme of “Gallipoli airbrushed from history – The 6th Royal Irish Rifles”. That surely is an argument for another day, although in strategic conception as a dramatic blow behind enemy lines designed to shorten the war, and in its calamitous failure, the Dardanelles campaign and Operation Market Garden could certainly be examined side by side, even had Hurst not fought in one and directed a film which recreated aspects of the other.

The authors argue that, like the American war veteran and director Sam Fuller (1912-1997), celebrated for his brutal portrayal of violence on screen, Hurst’s visceral experience of combat and loss resulted in an unusual degree of realism to his explorations of armed conflict. More problematically, they argue that the central role played by Arnhem veterans in Theirs is the Glory lends the film a particular authenticity. That is how the film was marketed, but against this stands the argument that combat does not lend itself to literal reproduction of individual or collective experience: why should using veterans to re-enact actual fighting necessarily make a film look more realistic? After all, there are good reasons why people have to be taught how to act. Comparable exercises seeking verité through the use of veterans to re-enact their war roles come to mind. These include the 1948 Norwegian film Kampen om tungtvannet, a reconstruction of the famous attack on the Norsk Hydro heavy water plant at Rjukan in 1943 – later dramatized in the American film The Heroes of Telemark (1965) – which featured four men who had participated in the original operation. The Special Operations Executive (SOE) agents Jacqueline Nairne and Harry Rée appeared in Now It Can Be Told (1946), a British Information Service film describing the training and activities of British agents despatched to Occupied France, while the head of SOE’s French Section, Maurice Buckmaster, appeared at the start of Odette (1953) which deals with the adventures of agent Odette Sansom, and SOE’s Vera Atkins played herself in the film. Similarly, Free French intelligence chief Andre Dewavrin (codenamed Colonel Passy) offered an exceedingly wooden self-portrait in the French Resistance film L’Armée des Ombres (1969). Actors generally do a much more convincing job. An example is the successful war film The Guns of Navarone (1961), dealing with the fictional exploits of a team of saboteurs behind enemy lines. Several of the main protagonists had considerable combat experience – Anthony Quayle with SOE in Albania, David Niven in the regular army in Normandy, Percy Herbert in Malaya – but more importantly all were also trained actors.

A chapter on “Hurst and conflict on film” is of particular interest. The authors point out that one of the principal actors in Ourselves Alone (1936), which ran for four weeks at Dublin’s Grafton Cinema, was John Loder. Loder, who played a British officer, had actually taken part in the suppression of the 1916 Rising, because he was in Dublin on leave visiting his father General Lowe. Loder gave the Imperial War Museum an interesting account of how he escorted Patrick Pearse to Kilmainham jail, the rebel leader presenting him with a cap badge in thanks for his courtesy. Ourselves Alone was banned in Northern Ireland because it was wrongly assumed to be pro-republican. A headline in de Valera’s Irish Press, covering a critical review of the film, declared “Hurst to make 1916”, though that was not to be. I noted other coincidences in the text: while taking a cigarette break at Denham Studios in England, a couple of the Arnhem veterans shared a light with the urbane James Mason, who was acting in Carol Reed’s Odd Man Out (1947), a film adapted from an F.L. Green novel and akin to Ourselves Alone in its IRA theme and in its sympathetic portrayal of the contesting rebels and police officers. Hurst’s earlier film On the Night of the Fire (1939), in which Mason had also featured, had been based on another F.L. Green novel. We might also note that prime minister Clement Attlee, who attended the London premiere of Theirs is the Glory, was like Hurst a veteran of Gallipoli, where he had supervised the successful departure of the rear-guard from Suvla Bay with his usual quiet competence.

One disappointing aspect of the book is that there is no systematic explanation of why Theirs is the Glory was made when it was made. The British Gaumont project clearly required not only government blessing, but official support with logistics, transport, accommodation, equipment, weapons, release of service personnel and so on. Was that reflected in the script and in the filming? The film did not delve into the deeply flawed plans for Operation Market Garden, still less suggest that ultimate responsibility for the disaster lay with Britain’s most celebrated soldier Field Marshal Bernard Law Montgomery, a devious and narcissistic man always careful to share out blame amongst others and to accumulate accolades for himself. It was only with the publication of Sir Harry Hinsley’s official history of British Intelligence in the Second World War in 1988 that it became clear that the Market Garden debacle was partly explained by a considerable failure of intelligence analysis: decoded German radio traffic indicated that various beaten-up German armoured units were regrouping and refitting in the area, but British generals assumed that these would be in no condition to mount sustained resistance.

Another key point concerns the Polish airborne units who participated in Market Garden, to whose contribution only one passing reference was made in Theirs is the Glory. Was this because the British government, who had already turned away from the Polish government-in-exile by recognising the Soviet-backed administration installed in Warsaw, did not want the film to highlight free Polish military achievements and sacrifice fighting alongside the western allies? Surely this matter deserved some exploration.

The authors write that their main aim was to present Hurst’s work bearing on conflict “in context – both militarily and with appropriate content from the film scripts, or other sources – and we will leave the critiquing to more qualified authorities on film and film history”. Their modesty is to be commended: they have produced not a tightly argued text, but a series of well-illustrated independent essays on some though not every aspect of Hurt’s work as a re-creator of conflict on screen. In that they have achieved what they set out to do, clearing the way for further research on and analysis of Hurst and of the films which he made.