by Juan F. Elices. This text may be archived and redistributed both in electronic form and in hard copy, provided that the author and journal are properly cited and no fee is charged for access. 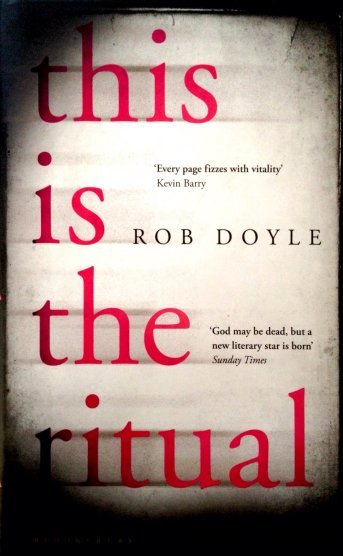 After listening to Rob Doyle at the most recent IASIL conference held at University College Cork in July I was eagerly anticipating reviewing This is the Ritual, his first collection of short stories. Before the publication of this volume, his award-winning debut novel Here are the Young Men (2014), which explores the uncompromising lives of three Dublin teenagers in the Celtic Tiger days, turned Doyle into one of the most promising voices in the Irish literary panorama. “On Nietzsche”, the story he chose to read in Cork, is probably one of the most vibrant and ironic of a collection in which the author draws on some of the issues and situations he had already examined in his opera prima, focusing more extensively on the very act of writing and its underlying complexities. This is the Ritual presents a wide array of characters, scenarios and topics that the author dissects with a scalpel and, sometimes, from rather excessively graphic viewpoints.

The book opens with “John Paul Finnegan, Paltry-Realist”, a story that revolves around Doyle’s views on the commodification literature is currently going through and the consequences this has on the reading public. Through the aggressive and occasionally vicious language of John Paul Finnegan, a fake writer whose only achievement is to have founded the so-called “paltry-realism” mode, of which he is the only practitioner, Doyle’s story encapsulates very interesting reflections upon the state of contemporary Irish literature and how commercial interests normally prevail over the quality of this or that particular work. The dialogic structure of this story, in which Finnegan seems to be addressing Doyle’s fictional persona, hides behind a very critical view upon the way some Irish literary icons have now become mere sightseeing attractions. It is no wonder that, according to the prevailing tone of this short story, the author inevitably refers to how Irish literature and James Joyce specifically, have been lately prostituted for the sake of attracting tourists and making profit. Finnegan, an obvious Joycean parody, vilifies Bloomsday as he insists that it is born out of hypocrisy: Ireland celebrates the glory of a book that not many have read and whose real interest for the ordinary people seems to be the passage in which Denny’s sausages are mentioned in “Calypso”. Even though it might sound a bit reductive on Doyle’s part, Ulysses does contain an allusion to this meal and brand and it seems like the perfect excuse to take advantage of Bloomsday’s commercial impact worldwide. It is very telling, then, that among all the richly literary passages Doyle could have selected, he chose this one and ended up focusing on a massive group of contemporary Dubliners and tourists eating sausages in a sort of Pantagruelian fashion.

After this insightful opening, the rest of the stories delve into social outcasts, failed and unrecognized writers and characters that cannot cope with a deep sense of unredeemed guilt. “No Man’s Land” is a brilliant recollection of the Ballymount area in South Dublin, where the anonymous narrator wanders around until he comes across a mysterious man with whom he ponders the most existential side of the human condition and the inevitability of death. It goes without saying that this story is full of echoes of Beckett’s Waiting for Godot and the way two individuals whose life seems to be trapped in a suffocating cul-de-sac find a space that provides them with a certain sense of relief and mutual understanding. Their need to find answers to questions that cannot possibly be resolved enables Doyle to build up a powerful philosophical debate between two ghostly figures dragged into a physical and spiritual limbo from which they are unable to escape.

Because This is the Ritual is a deep exploration into the lives and deeds of individuals whose isolated existence renders them completely invisible, their social dislocation and inability to maintain long-standing relations leads Doyle to construct characters determined by their own excesses. Drugs, alcohol and sex are key elements in this collection. The author’s detailed and explicit description of sexual scenes, which are sometimes on the verge of pornography, reveal the most animalistic side of the human being and place us face to face with our own depravity. This is precisely the case in “Barcelona”, in which Doyle presents a female protagonist for the first time in this volume. Alicia, an Irish girl just arrived in one of the most cosmopolitan cities in Europe, is unable to maintain a stable relationship and is solely interested in one-night stands that do not involve any kind of feeling or sentimental attachment. The narrator incorporates himself into the story, in a metafictional trick, as a man that Alicia meets up with after closing up the restaurant where she is a waitress. From their dialogue, the reader gets to know that both come from Ireland and that they seem to be staying in liberal and bohemian Barcelona as a way to move away from their repressed lives back home. In a similar vein, “The Turk Inside” portrays a depressive, solitary male character searching for true love, but which is here left unrequited. Once again, this man recurs to sex, drugs and alcohol to escape from his despondent and miserable reality and to hide behind his own failures.

It seems, though, that the central core of this collection is heavily sustained by several stories that gravitate around writers. Perhaps, this is where Doyle shows his artistry to greatest advantage, as he manages to blur the boundaries between fiction and reality by creating or recreating the lives of an array of different authors that, in most cases, emerge from Doyle’s vivid imagination. Besides “John-Paul Finnegan, Paltry-Realist”, Doyle seems to be particularly fond of this kind of literary figure as an excuse to explore the issues that prevail in This is the Ritual. In “The Glasgow Novels of Malcolm Donnelly”, “Fredrick Mulligan, Life in Flames” and “Martin Knows Me – the Lonely Struggle of David Haynes”, Doyle reflects again upon the very act of writing and how this process eventually exposes the most egocentric and obsessive side of a human being. In these three stories, Doyle focuses on the same human and literary profiles, namely, the isolated, unsuccessful and unrecognized figures whose work never sees the light of day due to their inability to face the underlying reality of writing.  One by one they turn to drugs and alcohol to reconcile themselves with their own failure. Within this group of literary narratives, “Paris Story” is the most incisive and critical. The author approaches the very hostile environment that lies behind this context and the tensions that emerge among authors, publishers, reviewers and all those directly or indirectly involved in this industry. Once again, guilt forcefully emerges as the element that guides the story. Doyle attempts to show how it can permeate a relationship that is established between a writer who has published an ill and destructive review about a book written by the woman who will become his wife.

All in all, Rob Doyle’s This is the Ritual exhibits not only the author’s current talents but also points to a very promising career ahead. However, it should also be argued that this collection falls short in that it fails to present a wider and more varied spectrum of themes and literary registers. The author certainly evinces his skill to anatomise the most sordid aspects of the human condition, but, at the same time, the writing is flawed by details that are superfluous and rather repetitive. Evidence of Doyle’s literary background is certainly apparent and impressive and his ability to capture our own frailties is indisputable, yet there are moments when his style is gratuitously affronting. The future that awaits Rob Doyle will, no doubt, be brilliant but this short story collection shows that he is still a long way to go.