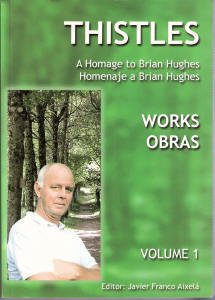 Scottish-born Brian Hughes (1951-2003) was professor of English literature at the University of Alicante. He was an enthusiastic teacher and a brilliant scholar with a distinguished career in the teaching of literature. His early death left his colleagues laden with grief, only partially relieved with the publication of these two volumes (see next entry) intended to be a homage to the departed friend.  As José Antonio Álvarez Amorós states in the introduction to the first book, which consists of a collection of Hughes’s articles, there were many areas which attracted hiscolleague’s attention (legal English, Hispanic studies, theory  and  practice  oftranslation) and he also excelled in the teaching and researching of Irish literature, being one of the harbingers of Irish studies in Spain. The present volume comprises, among other readings, his writings on Irish culture and literature, and I will focus on just those texts in these brief notes.

As early as 1984 Hughes was writing on the latent war in Northern Ireland, when the situation was at a dead end. He insisted on the necessity of a deep historical analysis to understand the causes of the conflict. Even though he divided the blame on the different parts involved, Hughes wrote then that in many cases sectarian violence hid questions of economic privilege.

In other articles on Northern Ireland, Hughes’s concerns veer toward the poets: John Hewitt, John Montague, Seamus Heaney and Derek Mahon. He denied the term ‘regionalists’ for these artists, and described their confidence in the exploration of their cultural identity. For Hughes, these four poets endeavour to find a common ground for a divided land and offer, in his opinion, complementary visions of community. Hughes’s erudition is not only evident in his exhaustive rendering of an author’s work (as he does in another article on John McGahern’s fiction, for example), but also in extracting the deep substratum that reflects that author’s influences. Any specialist can write on McGahern’s novels, but Hughes discovers the haunting presence of Samuel Beckett, and adds the latter’s most obscure works as evidence.

Brian Moore and Brian Friel are also subject to the analysis of Prof. Hughes. When considering Moore’s fiction he distinguishes between the earlier novels, in which the author renders female characters with understanding and sensibility, and the works of his middle period, where Moore is not far removed from «the style and assumptions of some of the popular subgenres of contemporary popular fiction» (52). As regards Brian Friel’s famous play, Translations, Hughes is right to assert that Friel draws many of his themes from the history of Ireland, and language is shown as an effective medium for directing the truth towards an intended target.

There is a whole section in the book devoted to Seamus Heaney, on whom Hughes wrote his Ph. D. dissertation and published a well-known bilingual anthology (1993).

The most important aspect of his approach to Heaney is his refusal to simplify the complexity of his poems. Instead, he casts light on each of the several sides of that prism which is the poet’s art. Hughes’s articles on Heaney become a thorough revision of the author’s progress, from the sensual presence of rural life in his earlier poems to the responsible concerns of his later period: «Heaney’s acceptance of his Ulster inheritance involves an honest, and crippling, sense of incapacity: inability to transcend the force of unjust law, powerlessness to transcend the trap of history and the dead weight of custom» (82). Another section focuses on a very different poet from Northern Ireland, Derek Mahon, who presents an interesting contrast to Heaney.

It has to be said that the present edition provides accurate information on the origin of all the articles (dates of publication, sources, etc.). It is, in short, a respectful and dignified edition of Brian Hughes’s writings.