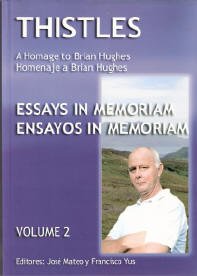 Thistles. A Homage to Brian Hughes. Vol. 2. Essays in Memorian.

In this academic tribute to Brian Hughes made by different specialists, mainly from Spanish universities, Irish literature had to occupy a predominant place: nine out of twenty-two chapters are one way or another related to Irish literature and culture. In this way the volume turns into an overview of Irish Studies in Spain, a state-of-the-question report, thanks to the variety of topics it covers. In many of the chapters a debt is acknowledged to the pioneering work of Brian Hughes.

In the group of essays related to Irish themes,  I should  mention two essays  on Seamus Heaney. María Antonia Álvarez expands on the poet’s life-writings, and traces the evolution of Heaney’s early biographical poems, from the use of elemental poetic resources to the exploration of wider surroundings. María Martínez Lirola, for her part, applies a systemic-functional framework to one of the most precise, moving and emotional poems of Heaney, «Follower». For a complementary and differing reading of the poem perhaps it would be interesting to read the translation made by Beatriz Villacañas in a special issue of the Revista Alicantina de Estudios Ingleses (No. 5, November 1992) edited by Hughes himself with the contributions of «a small but dedicated group of scholars». In the famous poem the speaker recalls his admiration for his father, and how their positions are now reversed. The article pays attention to the lexicon of the poem and how the author creates the context through the choice of words.

Antonio Matarredona Santonja writes on the authorial intention of Brian Friel in Translations, producing an exhaustive analysis of the play. Encarnación Hidalgo Tenorio sheds new light on the public response met by the writers of the Abbey Theatre. Hers is a detailed argumentation in which three of the most representative plays of the movement, Yeats’s The Countess Cathleen, Synge’s The Playboy of the Western World, and O’Casey’s The Plough and the Stars, are considered as «unsuccessful theatrical experiments» because they offended the audience of their time and deviated from the expected conventions.

María Jesús Lorenzo Modia explores the evolution of Medbh McGuckian’s poetry, considers key aspects of her work, such as the writer’s adherence to the Catholic faith, and comments on an unpublished poem «The Sands of St. Cyprian», which is included in the article. Poetry is also the concern of Ake Persson, who writes on the concept of the fantastic in Brendan Kennelly’s work. John P. Sanderson considers the manipulation that is exerted in the process of making a film, and chooses Neil Jordan’s Michael Collins (1996) to show the modern tendency in the film industry to use a number of narrative techniques to present their historic representations as if they were actual facts. Francisco Javier Torres Ribelles defends a better critical status for Synge’s collection of articles «In Connemara» and, finally, Francisco Yus writes about cultural representations using Irish comedian Dave Allen’s monologues as material for his analysis. The book confirms the usefulness of this kind of practical, direct criticism: scholars applying the tools of their trade (erudition, curiosity, close reading) to the clarification of highly sophisticated cultural products.